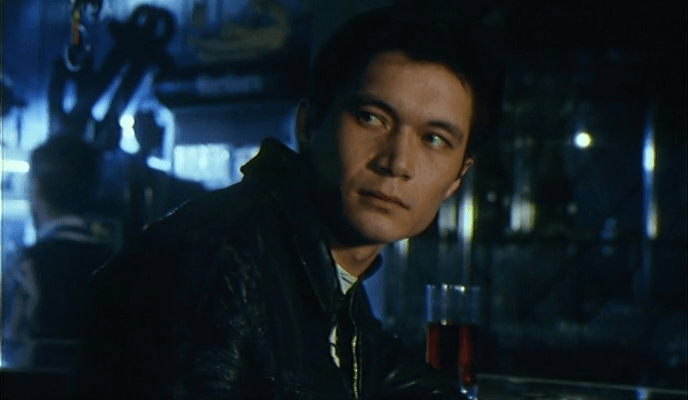 If there’s one English phrase that makes every Asian studies major and every China hand wince, it’s this: ‘May you live in interesting times’. Unfortunately, it belongs to a considerable collection of pseudo-Confucian aphorisms and ancient Chinese proverbs of dubious origin, which have accumulated in Western languages over the decades and centuries as something of a relic of chinoiserie: attributing wisdoms both earthy and mystical to a mistily-distant exotic oriental antiquity. Unfortunately, despite even the heroic attempts by Russian Orthodox missionary churchmen to demystify China to their countrymen, it seems even post-Soviet artists have picked up a few of our bad old Jesuitical Western habits.

Sorry to go on a mini-rant, there, but my recent watch of Dárejan Ómirbaev’s 1998 film Killer [in Kazakh, Shilge; in French, Tueur à gages] brought it to mind. This orientalist cliché in its Russian form, ‘Не дай вам Бог жить в эпоху перемен’, serves as the film’s tagline. Even if this mudrost’ is incorrectly attributed, the point of the film is well made, and that point is nothing at all like the misty exoticism the tagline might otherwise imply. It also places Ómirbaev in a kind of spiritual kinship with modern Chinese indie filmmakers like Jia Zhangke. Here, Ómirbaev poignantly takes on the same concerns and themes that drive films like Shıza and Réketır, but he does so in a much darker and more understated way.

The story is straightforward. Ómirbaev details the unfortunate life of a cab driver, Marat (Talgat Asetov – who had a supporting role in Kaırat), who is forced into crime when he accidentally rear-ends a Mercedes and finds himself out of money to pay back the other driver. Events spiral out of control from there. His sister gets cheated out of her savings by fake investors, so his family can’t help him out. He has to borrow money from a loan shark. Marat gets beaten up by the Mercedes owner’s hirelings. He loses his job when his employer commits suicide. He tries to buy a new car, but it promptly gets stolen. His newborn son contracts an early childhood illness which demands expensive therapy. As he gets deeper and deeper into debt, his situation looking increasingly hopeless, the loan shark offers him a way out that involves taking a life.

Killer is uncompromisingly bleak from start to finish. The otherwise dingy palette is dominated by dark blues and dark reds. There is little of Kazakhstan’s natural beauty to be seen (unless it’s out the window of a moving car); instead, we are thrown into a world of decaying Soviet concrete apartments, garages and bars, illuminated where appropriate by fluorescent lights. There are hints early on in the film that drive home the destructive callousness of shock therapy and gangster capitalism that Ómirbaev tries to convey. The mathematics professor Marat works for, Berik Qaraqululy Qasımov, complains that there is no room for proper science in a society where everything is commercialised and where everyone is thrown into insecurity and chaos – and he later commits suicide in his office. ‘Don’t think about tomorrow,’ says the bartender Oleg, as he persuades Marat to borrow money from the loan shark Erjan Shakenovich at an interest rate of 1% per day. Everything is for sale under capitalism: honour, pride, and in the end even basic human morality. Just as in Shıza and Réketır, boxing is taken as the preferred cinematic metaphor for the brutal, cutthroat competition that pits the weak against the strong: though here, it’s portrayed on television screens.

The hopelessness of ordinary Kazakh life under this œconomic anarchy is signaled in several ways. First of all, in a lengthy scene at the beginning of the film, the professor Marat works for can’t find his way out of the studio where he’s giving an interview: in a maze of nondescript hallways, he has to ask for help twice to find his way out. It’s also interesting that Marat’s wife Aijan (Roksana Abuova) takes an almost completely passive rôle in the film. Marat’s family provides him motivation, but they have no place in the cutthroat world outside, and Marat himself is powerless to protect them from it.

In a scene that’s typical Ómirbaev, one of the minor characters recites a lengthy excerpt from Kafka. (I can forgive him for this, because the tension and tight pacing of the film, with Marat being hounded and stalked through his labyrinthine environs like the prey of an unseen predator, shows us that Ómirbaev really gets Kafka.) Of course, it wouldn’t be an Ómirbaev movie, either, if the main character didn’t lose a fight and get beaten up, as happens to Marat off-screen when he tries to stop the thieves who steal his car. Ómirbaev also gives us repeated dream sequences: in Marat’s dreams he goes up to a rooftop, looking to throw himself off. In fact, the only real expression of hope comes from a journalist who is reading a newspaper by the riverside. He remarks to Marat on the differences between Kazakhstan, with its brutal winters, and countries with warmer climates that have no need for warm clothes or oil for heat – but he also says that spring is beautiful, and it’s worth weathering brutal winters for. Of course, this journalist promptly gets shot to death in front of his toddler son, because he had written a scathing piece about some well-connected businessmen’s plans to privatise a factory.

In addition to being the most unsparing of Ómirbaev’s films, Killer is also the most direct. In Killer Dárejan Ómirbaev shows himself to be an expert at listening for what Canadian conservative philosopher George Grant called ‘intimations of deprival’. The brooding pathos of Marat, and the despair of his academic employer, ruthlessly reflects an insecurity that was felt by millions across the former Soviet states in the wake of shock therapy. And the prominent placement of Pepsi and Coca-Cola logos throughout the film shows us exactly whom Ómirbaev believes is to blame. It’s telling that the teenage daughter of the loan shark is seen exactly once, reciting English lessons from a Walkman: later, her father is shown telling her over the phone to study and get a degree overseas so she can stay in America – because why would she want to come back?

Yet despite the film’s squarely anti-capitalist stance, and despite Berik Qasımov’s yearnings for the stability of the Soviet welfare state and employment policies, Ómirbaev shows very little sympathy for Soviet nostalgia. The closest he comes, in fact, is a scene in Oleg’s bar where go-go dancers do a striptease with Soviet naval suits, accompanied by an English song with the refrain ‘These are good times!’ Even there, the nostalgia is framed in an ironic way, as though the only way to celebrate the ‘good times’ happening now is to remember when Soviet times might have been better. The imagery of the Soviet legacy is turned into an instrument for cheap titillation. Like everything else, nostalgia is a commodity for sale.

This brings me back to the faux-classical Chinese mudrost’ that sets the tone for the film. Despite its grimness, Killer bears less resemblance to other post-Soviet Kazakhstani gangster movies than it does to the spare, quiet desperation of the movies of Jia Zhangke, like 2000’s Platform and 2002’s Unknown Pleasures. Both directors are deeply sensitive to the losses – in terms of human dignity and moral direction – that have been incurred by their respective nations’ transitions to capitalism and sexual licence. Both directors hint that the freedom promised by the unleashing of market forces upon people’s personal and work lives is, in fact, another form of imprisonment.

Ómirbaev continues in the traditions of the Kazakh New Wave, here. All the actors are drama school students or amateurs. And Ómirbaev continues to make subtle hat-tips to Igla in particular. Of Ómirbaev’s films, I would have to say that even though Kardiogramma features more impressive art direction, and even though Stýdent makes a clearer and more subtle use of its literary footholds, I think Killer is so far my favourite of his. Here Ómirbaev’s minimalist tendencies are tastefully restrained, and he expresses himself with an admirable œconomy of language and visuals. The result is a film that is crisp, precise and riveting. It features an immediately relatable protagonist, whose descent into crime is shown with a subtlety such that, even though the audience is rightly appalled by Marat’s criminal action, and even though we are not surprised at his abrupt end, we can’t help but sympathise with his reasons.