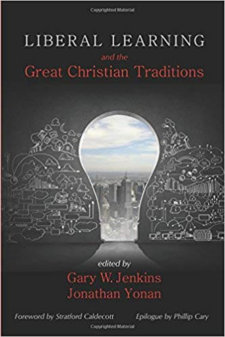 In the forward, Stratford Caldecott claims that education is in crisis because there is no coherent vision of what education is and should be for society. Liberal education, as defined by the trivium and quadrivium, was the traditional vehicle to teach students about God, happiness, and the afterlife until the modern era when the arts became split off from the sciences. The publication of this edited collection is in response to this crisis from the perspective of several Christian religious traditions.

In the introduction, Jenkins and Yonan reviews Mark Knoll’s The Scandal of the Evangelical Mind to understand why evangelical Christians are perceived as anti-intellectual. Part of it is due to early populist Protestant anti-intellectuals who expanded the attack on Catholic dogma into an attack on education in general; part of it are religious leaders derive their authority from popular appeal rather than from the hierarchy of the institutional church; and part of it is the nature of evangelical revivals which are events outside any formal church setting and elevates the autonomy of the individual believer over the authority of the church. To remedy this, Jenkins and Yonan had asked their contributors to address two questions in this book: what is a religious tradition’s distinctive vision of the good life, and what sort of education is required to live in such a society.

In “Liberal Education and the Orthodox Church,” James Carey reviews how logos was understood by classical Greek and early Christian thinkers and how this account of reason is compatible in both the Catholic and Orthodox Churches. What the Orthodox Church offers is an appreciation of beauty in the Incarnation, Resurrection, and Ascension of Christ which provides a vision that transcends what reason can offer. In the next chapter, the Catholic perspective is presented by R. J. Snell who offers a series of propositions of how the Catholic Church maintains the best of the old and the new in its education. Contrary to what some may think, the Catholic vision is a pluralist account of the good life that includes a multitude of ways to understand the relationship between faith and reason and how one can contribute to society.

Chapter three is Korey D. Maas’ account of Lutheranism with a focus on the efforts of Luther, Melanchthon, and other reformers on revising the universities during the Reformation. They valued a sound education because of the explicit link between theology and pedagogy; or, as Luther said, “God has preserved the church through schools.” The education they advocated was a liberal education that respected the differences between secular and sacred subjects, corresponding to Luther’s doctrine of two kingdoms. Mass warns that we should not see the two kingdoms are separate types of existence but as two aspects of the same reality in which we live and are educated.

Esther Lightcap Meek explores the reform tradition in chapter four, with emphasis on the tradition’s view of God’s grace as one to accept or be rejected. She then explains the “dual epistemologies” of modern life with its modernist (e.g., Cartesian) and covenant (e.g., Calvinist) features. Adopting Polanyi, Meek argues that by using “subsidiary clues,” we can live an integrated life from our existential, situational, and normative existences. From this we achieve “interpersonal reciprocity” in our covenant epistemology that is dynamic, objective, and ongoing in its communication with others.

Anglicanism is the focus of the following chapter with Ashley Null who reviews the history of the Angelicin Church and concludes there is no Angelicin way but ways. However, at its core Anglicanism is based in Scripture, worship, and church tradition. Next is Sara Wenger Shenk’s look at the “organized goodness” of the Mennonite’s: discipleship (patterning one’s life on Christ), hermeneutical community (discerning truth communally), and ecclesiology (the community for transformation). Learning in this tradition emphasizes the practical, concrete ways one can know and follow Christ. Finally, in the penultimate chapter, W. Stephen Gunter examines Methodism by looking at how connecting knowledge with piety was crucial in Wesley, Coke, and Ashbury. Contrary to the prevalent view, Gunter shows how piety was a driving force in Methodist education in the United States, particularly before the Civil War.

In the epilogue, Phillip Carey with some thoughts about the “Protestant turn away” from contemplative thought and reviews how Protestants can learn from the seven previous essays: the Orthodox understanding that reason is more than discursive thought; the Catholic view that divine contemplation is the foundation for education; Luther’s support of liberal education; Calvin’s call to redeem secular culture; Anglicanism’ openness to “high church” traditions; the Mennonite view of action as a type of knowing; and the unity of piety and knowledge in Methodist institutions of higher education. Carey concludes with a plead for each tradition to continue to educate and form members in their faith, so they can continue as traditions in this secular, modern world.

Of course, not every Christian tradition can be accounted in such a book. Having said that, Liberal Learning and the Great Christian Tradition provides a fine service in explicating what each Christian tradition has to offer in our understanding of the good life and how we should accordingly educate our students.

Liberty in the Things of God: The Christian Origins of Religious Freedom