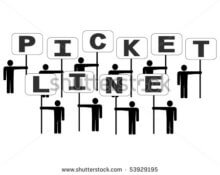 Several weeks ago, as a result of certain . . . misunderstandings, your columnist and about twenty three hundred of his co-workers found themselves on strike, rather to their shock.Librarians do not go on strike very often–the last time our local walked was 1979. In fact, going on strike is not something that many people do. Unions are not the commonplace reality they used to be.

So it was new to most of us. Most of our images of strikes and unions were gathered by osmosis from watching old black and white movies like On the Waterfront, but in fact, like many things, it hardly lived up to the stereotype. Everything was boringly civilized.

The evening before a strikes starts, the striker receives a robo-call to report to this or that location in the morning. First question: what to wear? Answer: good walking shoes. Don’t bother with a tie.

On arriving at the picket line, you find organizers already there with piles of printed signs. Each sign has a plastic cord that slips around the neck (making one look like half a sandwich sign.) Placards on sticks are sooooo nineteen forties.

After that you join a crowd of people walking around and around in a large circle.

And you keep on walking, for the next four hours. And that’s largely it. It is not a forced march, no one minds if you sit down for a while, or stop to have lunch, but there is a compulsion to keep going. Everyone else is, after all.

The first day can be got through on novelty.

Days two to four are spent adjusting. On day two, you arrive at your station without the tie you wore yesterday, and in layered clothing, and double socks.

By day three, you know what to pack for lunch and you have dug the old pocket radio from a drawer and furnished it with fresh batteries. Those more up to date bring iPods. Oh, John L. Lewis, what would you think.

By day five, the first aches and pains have smoothed out and the body knows about how much energy is going to be expended and at what rate. The shift becomes a task, not an open ended adventure.

By the second week, it is routine, in fact it is the routine, until another call comes through and settlement is announced, and everyone goes back to work, a little deflated.

Settlements, even when satisfactory, are often a little disappointing. Bismarck understood this. Win or lose, management and labour have to live with each other and this means compromise, which is dispiriting. Labor disputes are domestic issues, not something that ends in a Cannae.

What does someone do for four hours while walking around in circle? The situation is anomalous. You are walking, but you aren’t actually going anywhere. The strike marshals are forever urging the strikers to chant slogans. Many people do, but it gets old quickly. Not a lot of creativity is allowed. There are two or three model chants (two four six eight we’re what makes libraries great, for example). Yelling “Down with the tsar” or “Free Sacco and Vanzetti” is not considered amusing.

Some people chat with fellow workers, but not as much as one might think. Most of the people here are strangers–they work in the same system but not in the same place. Anyway, people at work are people with whom one is (it is to be hoped) on friendly terms, but they are not friends.

What about meditating? Didn’t the peripatetics get a lot of ideas walking up and down? Well, they probably sat down a lot too. This sort of low intensity continual exercise is wonderful for the waistline but it damps the mind rather than sharpening it.

Counting the number of laps helps a little. Listening to the local classical music station passes the time. So does memorizing foreign vocabulary, oddly enough, or singing hymns sotto voce.

The striker soon become intimate with weather. People in offices go through weather to their buildings. People who work outdoors are focused on their labor. The person on the picket line, however, is simply in it.

If you wanted a metaphysical answer you could say that industrial action is a political mode of existence, and the world of politics, as Hannah Arendt noted, produces nothing. One could say it is a species of symbolic response. I doubt that Voegelin ever went on strike but he must have seen a good deal of it in Vienna, and what EV saw, EV thought about, and thought hard.

One or two things were unanticipated.

It was noticeable how quickly one comes to believe in what one are doing. Now we do not mean here any sort of sentimental glop of working person’s brotherhood. Most of the people on a strike line are in no way naive, either about the management or their fellow workers. All men are brothers indeed, which doesn’t mean we like all our brothers.

Rather, it is that after several days of communal action, an inarticulate resolution begins to creep over one, oddly intense. Joint action creates a common hexis, and that generates corresponding resolve.

It is not that one begins to think that the cause is holy and the members saints. It is rather a determination to do the right thing, win or lose. Shall all this walking go to waste? Not on your tin-type of Joe Hill it won’t.

Another point, harder to describe.

Most of us lead our lives, as it were, in a fairly restricted set of rooms: the home, the office, the church, the local tavern, and the streets that connect them. We know, of course that there are other ways of living. As we go down the hallways we pass rooms with signs: army, hospital, court, funerals, but they are not present realities.

Then something changes and we go through an unused door, and lo, everything is there: the equipment is there, the people are there, they have anticipated us.

In fact these people–cops, doctors, lawyers, funeral directors–were there all along. They were possibilities in our lives all along. We just didn’t notice until now.

Why is this discovery so unsettling? Why is it unnerving how quickly we feel at home in the new circumstances?

Each of us is a blend of the individual and the species. Such transitions suggest that we are perhaps as much species, or more, that we are our precious individual substances. There is more to us than we know.

So, taken in the right way and without bringing in the rights and wrongs of a particular case, the experience of walking the line can be not only enlarging but disturbing.

From the Multiversity Cave: Plato and Periagoge

Does God Have a History?

A Dose of Realism for Conservative Politics