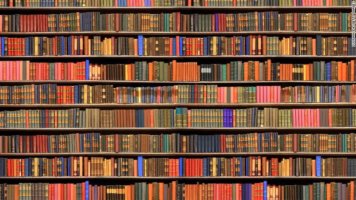 Two or three weeks ago, we found ourselves holding a modest volume from 2001 entitled Hebrew Scholarship in the Medieval World and feeling a little surprised.The volume was a collection of essays in honor of a recently retired authority in the field of Judaic-Spanish history. It is important to point out at the start that your columnist has no expertise at all in this field. We had picked up a suggestion reference from Amazon while searching something else and, having access to a local university library (and being too cheap to buy a copy), we were checking out what seemed like an interesting title.

Checking the table of contents, we found such items as:

and others of that sort.

There is no great surprise in such things per se; we were therefore a little startled at the strong wave of emotion evoked by these titles, a compact blast of charm, envy, and regret.

How lucky seemed those who were expert in these things!

What a shame that we could never expect (time, circumstance, and present duties being what they were) to get more than an inch deep in these esoteric matters, so redolent of time and distance!

We remembered a poem by Geoffrey Grigson who compared an unfulfilled wish to learn Russian, a wish unlikely to be consummated, to standing outside the gates of a vast estate and looking at the palace within at the end of a long lane.

Certainly the reaction was strong enough to think about. We concluded that what we had here was a instance of the glamour of scholarship.

“The glamour of what?” the reader may quite reasonably ask. The book in question, though very worthy and learned and so forth seems to have nothing do with things usually counted as glamorous such as actresses, lavish dinner parties, high-end automobiles, and promising tech stocks.

“Glamour” is, alas, a too often used word, and one more or less debased, suggesting money, political connections, and the paparazzi. Yet the word has a proper, and more narrow sense. As Basil Davenport pointed out:

“Gramarye, or sorcery, and glamour, which means originally a magic spell, are at bottom the same word as grammar; they go back to time when book-learning was so rare and mysterious as to be thought much the same thing as witchcraft.”

The glamour of scholarship in this narrower sense, is an instantiation of the general urge to learning, a desire that is part of the nature of man (says Aristotle) and one so strong that its exercise may remedy of sorrow (says Aquinas).

“The best thing for being sad,” replied Merlin, beginning to puff and blow, “is to learn something. That’s the only thing that never fails. You may grow old and trembling in your anatomies, you may lie awake at night listening to the disorder of your veins, you may miss your only love, you may see the world about you devastated by evil lunatics, or know your honour trampled in the sewers of baser minds. There is only one thing for it then–to learn.” –T. H. White

The particular glamour of scholarship seems to work in the case where what is learned is old, or far away, or almost forgotten. It is the attraction of old books, inscriptions, ancient coins and odd languages. It is most often learning that seems to have no practical advantage beyond itself.

In this, we would argue, it differs from Gnosticism. The Gnostic certainly seeks hidden knowledge. But he seeks it because it brings concrete profit (even if that means being joined to the spirits of the seventh ring or something similar).

If we look, we see this dimly even in the popular media. What is the real appeal of Indiana Jones? The pretty girl, the chase scenes, and the villains are a blind. IJ is glamorous because he is learning something.

We can sometimes feel this glamour in used bookstores, particularly the old and messy ones. The disorder and the dust over the stacks hints that here, perhaps, we will find the book that changes everything. Margaret Irwin evokes this in her famous short story “The Book”:

“From among this neat, new, cloth-bound crowd there towered here and there a musty sepulchre of learning, brown with the color of dust rather than leather, with no trace of gilded letters, however faded, on its crumbling back to tell what lay inside . . .  their blank forbidding backs uplifted above their frivolous surroundings with the air of scorn that belongs to private and concealed knowledge. . . .”

In that instance things did not work out well, of course, and perhaps it is an extreme case.

Now to all this there is the reasonable response of pointing out that to those deep in a subject the glamour often seems painfully thin.

“I certainly don’t feel very glamorous” says the archaeologist sitting in front of a table covered with innumerable indistinguishable potshards.

“I came to this topic for the glamour” adds the academic knee deep in footnotes that will remain unread even by his rivals for tenure. “I was misinformed.”

These are the people who ought to know. Is the notion then an illusion? Were they fooled when they began digging into Gavin Douglas or Tocharian?

No, not at all. It was no more an illusion then those mountains seen far off. Why then do we not feel it? With the diffidence proper to those climbing out to the end of a limb, we would like to suggest two reasons.

First that this type of enchantment seems to work best in those cases where the learning is undertaken for its own sake and out of liberty. It is a glamour proper to things taken in themselves.

To make one’s living from these matters is no disgrace, but it tends to set an end to our actions beyond the things we are actually doing here and most often sets that end in those things designed to be temporary and consumable, like heat, medical care, and food–the realm of labour, according to Hannah Arendt.

Of course this is not entirely fair. After all, in most cases we have assumed the duties of a job voluntarily. But in the drudgery of day-to-day it is difficult to remember this. The act of liberty has been expended, the pressure of now is altogether too present.

Secondly, glamour is in distance and things seem all at once, even if partially, such as the mountains we mentioned. When one is among mountains one has to do with particulars, most of them vertical. But once again this does not negate the initial vision.

What can one do to re-awake this glamour in the middle of an on-going slog of work (and most scholarship is exactly that)? Something that encourages.

Perhaps careful meditation and recollection can return one to the fact of that initial vision. But it may be an illusion to attempt to reawaken the emotion itself.

What those who soldier on through the process receive is not glamour but faith, a truer thing. One no longer feels the glamour, but in part participates in it. What you feel when you stand in front of the painting cannot be the same as when one becomes part of the painting itself.

The Fantasy of Promiscuity

John Locke and the Dark Side of Toleration

Jeremiah and the Reclamation of the West