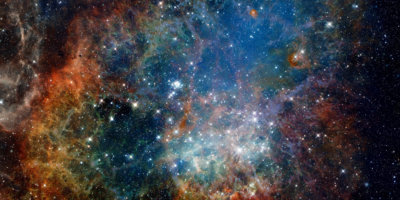 Some astronomers think that a great, even infinite, number of universes are floating about somewhere out there in space. These worlds, with no real evidence, to be sure, are said to exist in addition to the one in which most of us have but temporary residence. The universe we do find ourselves in does seem vast enough for the purposes for which we exist. And why do we exist? Indeed, one of the chapters of The Universe We Think In is entitled precisely: “Why Do I Exist?” This is a worthy question that we ought, sooner or later, to ask ourselves, even if we choose not to do so because, somehow, we are afraid of the answer.

A second, related, chapter is entitled: “The Universe We Die In.” The unique person, with a specific name and DNA, who is conceived of a man and a woman in this world, is the same one who dies. Sometimes he dies before birth, but most people die at various ages from one to ninety. Some few last for a century of living among others of our kind. We cannot arrive in this world but by conception and birth. We always leave it by death. Some scientists, to be sure, are working doggedly to make us live longer and longer as if increased length of life alone would somehow better explain why we exist in the first place.

Generally speaking, we find that we live in two worlds. One is the world that is, the one that supports us with what we need to live at all. The second world is the world of thought about this existing world which contains us within it. Truth is said to exist when what is out there, so to speak, corresponds with what we think about it. Some people, no doubt, do maintain that what is in our minds is wholly of our own concoction. These same people, when they are ill, instead of just changing their minds, still go to a doctor. In some things, it is still wise to see what people do rather than what they say.

At first sight, it does seem strange that anything works at all even when it does exist. If we build a bridge over a stream but miscalculate on the length, foundations, or stress, it collapses. It seems to be obeying a law that we, the designers, did not ourselves create but which we can understand and use. The next time we build the bridge the right way. It stays there. Why? Some correspondence exists between our minds and reality. They are related. Is that a mere coincidence?

The Existence of Mind

Another of the chapters in this book is entitled: “Why Are There Minds in the Universe?” It seems like more than an accident—partly because we cannot understand an accident until we realize that it is something that happens when two things, each with its own purpose, cross each other. Aristotle famously stated that our knowledge begins in wonder, not necessity. Our first act on seeing anything is contemplative. We just want to know what it is. Once we realize what it is, we might then proceed to make something with it or do something about it. It seems that nothing is complete until it is known. And it cannot be known without a knower. Among the finite things we encounter, only we human beings are also knowers.

For minds that are not divine, knowing what the cosmos is takes time and numbers. The universe needs to be known from within itself by minds that are finite. In this sense, the universe stands between two minds, the mind that ordered it to be as it is and the mind that learns from the things in the universe what is within it. The universe does not exist just to be there, it exists to be known. And once it is known, it exists that its knower within it might achieve his own end which, at bottom, consists in knowing the knower of its whole order of things.

The universe we live in is the same one that we think in. It is almost as if we find ourselves in the world in order to think about it. We think about the particular things in it, what they are, how they function. We also come to think about the universe as a whole and our personal place in it. The first chapter of the book asks us: How many of us are there over time? Why so many? The universe we live in is constructed on a grand scale. Yet, as Chesterton once said, we should not confuse matter with spirit. The smallest of the spirits is more important than the whole of the material world—a statement not intended to lessen the importance of the material side of the world. Both matter and spirit exist and seem to exist in some order. The universe reveals order, mind, as Anaxagoras taught Socrates, but the mind it reveals is not its own. It is a received mind. And it is clearly not our mind. We can, to be sure, impose our ideas on things. But if something is wrong with our ideas, sooner or later, things, including human things, won’t work or work as they ought to.

Our world is filled with things that do not go right because of the way we use them. Indeed, some things in the world are really bad because we use  them wrongly. This disorder can include our very selves. We find that we need to put some discipline into our own lives if we want to live justly and fairly among others. Indeed, we find, as Aristotle said, that without ordering ourselves we will probably not see properly what is ourselves. So we can wonder whether the world might not exist to see what we will do with it if we are let loose in it. The chapters in this book on politics, human destiny, and apocalyptic disorder deal with the side of existence that sees the cosmos as the arena in which human beings work out their final destiny in the time they are given.

Law, in Aquinas’ presentation, can be understood as mind speaking to mind. Law intends that the mind that is in the legislation and the mind in the one bound to obey it are in correspondence. In obeying the law, we act rationally since we understand its reason. The universe itself is conceived to be founded in Logos, in mind. In this sense, knowing what is, in effect, means to know something of the mind that ordered things as they are. Aristotle defines mind as that power in us that is capax omnium, capable of knowing all that is. What is peculiar about the human mind is that it needs many minds over much time to see all that is there to see in this universe that already is.

The existing human being, however, is in a paradoxical situation. A purely natural man with a natural end never existed in this universe from its beginning. This is the teaching of the revelational tradition that notices that, as Aquinas said, “Homo naturaliter non humanus sed superhumanus est.” That is, each individual of this race of men in this cosmos was created to reach an end that is beyond the natural capacity of what it is to be a human being. But each person could receive this elevation because he was a human being whose mind is capax omnium. Human beings were created literally to know and live the inner life of the creator of this same universe. This is the telos, the end of both human beings and of the universe itself as an arena for revealing how each person lives.

In the universe we live in, the one key text to understand our situation is that provided by Plato at the end of the Republic. He understood that the record of each created person ultimately was to be judged by the way he thought and lived in the polities of his time in the world. No life is complete unless and until it is judged. And this judgment follows from the dignity of what it is to be a human being called to eternal life. This final judgment means that, while politics is the highest practical science, as Aristotle said, the absolutely highest science is that revealed to us about the final completion of our being.

This was originally published with the same title in Law and Liberty on June 19, 2018.

How I Was Diagnosed With Progonoplexia