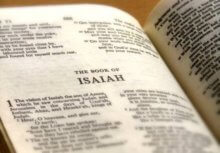 Can it be that by looking very hard at something, we sometimes miss what we are staring at?

The prophet Isaiah comes into the gospels and the Christian tradition in a large way, but ordinary familiarity usually comes in snippets – bits of Handel, partial recollection of Michelangelo’s painting and the story of the Ethiopian eunuch . . .

Dissatisfied with this, and having a modest command of Hebrew, we decided to finally read Isaiah, in the original.

Now to read Isaiah in Hebrew is not an easy job, but not overwhelmingly difficult either. It’s rather like going on a serious guided tour of the Antarctic continent, but not taking a job there, or, God forbid, wintering over.

At any rate, we got ourselves the appropriate Biblia Hebraica Stuttgartensia fascicle, a good, and very thorough, commentary by Joseph Blenkinsopp from Anchor, and some biblical software from the Logos Company and set to work.

That was about two years ago. At this point we are in chapter 57 (out of 66). We have increased sympathy with the eunuch.

The comments that follow are in the spirit of that serious tourist, rather as author Gabrielle Walker does in her book Antarctica: an intimate portrait of a mysterious continent (a book which we can recommend).  “Vass you dere, Charlie?” asked the radio comedian, and we can answer, we been there.

The pleasures of reading Isaiah are less easy to describe than the frustrations.

There is the simple satisfaction of making sense of the text. This is a part of all translation, of course. What we mean is the moment when the foreign words seem to unify and grow clear. It is the moment of insight, when you see the figure in the carpet or the face in the cut out blocks…

More particular to Isaiah are those moments when, nose to the text, you suddenly realize that what you are reading is something that you have heard over and over in English from the pulpit or the choir. Oh, so this is the original of that. It is a little like going to the National Gallery and seeing paintings one had only known in reproduction. Yes, they look alike, but oh my, the difference.

But the difficulties of Isaiah . . . mon Dieu. Oy. The student will find at least four major levels of puzzlement, each piled on the other.

To begin, there is the Hebrew itself.

Hebrew is not, actually, that complicated as a language. The morphology is a little picky, but the syntax offers no horror comparable to the Greek conditional.

But being a Semite language it is structured as a Semitic language, and much of that that is foreign to the habits which the Anglo speaker picks up at Mother’s knee. One can understand it, but it appears unnatural, and because it is unnatural, it is difficult to think in Hebrew (difficult for us les maudits anglophones, we mean).  We have found this particularly the case in regard to suffix pronouns. And with that difficulty comes a lessening of the immediacy that the inspired author, or authors, counted on.

On the one hand, biblical vocabulary is surprisingly small – only around eight thousand words.

On the other hand, every one of those words is radically foreign to the Anglo ear. No false friends here, but also no guessing at a word because you remember a word like it in Latin. This is their game, by the powers.

Under that is the deeper issue, often ignored by language teachers, that none of the words in Hebrew really match the equivalents they are given in English.  We all remember C.S. Lewis learning as a student that ναυς does not mean ship. A ship has smoke stacks, a ναυς has oars and is full of Greeks. That is easy enough to learn.  But what is the set of overtones in a word like קטל that distinguishes it from “kill.”?

So there is that, and it’s not easy. On the other hand, if you have a taste for it, it is a range of possibilities.

Beyond the language, what you are reading, the Text, is . . . iffy. For a document two thousand five hundred years old, the manuscript tradition of Isaiah is pretty reliable and a credit to the generations of scribes who have preserved it. But there are holes, there are uncertainties, there are varied readings. Again, for those so inclined, this provides hours of pleasurable contemplation and debate and occasional vituperation.

Isaiah is difficult to read, therefore, and often it is hard to know if what you are reading is what the author (or authors) wanted you to read.

Piled on these ashlars of uncertainty is the very tricky question of authorial intent itself. When we read Dickens or Hemingway, it is usually easy enough to catch on to what the author felt about his material, and meant us to feel. But Isaiah is two millennia old and that past is a foreign country (as Hartley remarked) and their ways are not our ways. Add to that, that the text of Isaiah is a pesto of three or more authors, and it is not always easy to understand the point of a text, or why it is where it is, or how it is meant to affect us. And yet these are the central issues in any writing. What if we didn’t know Wodehouse was supposed to be funny?

There is also the intent of the work as a whole. In Isaiah this is often rather difficult to follow. Now he denounces, now he praises, now he denounces someone else. Without an overall plot, it is hard to understand why one part follows another. It is like listening to a symphony, where a loud passage is suddenly followed by some twiddly stuff, without explanation, and then back to the rackety bit again and who knows why?

Lots of room for commentary here.

Finally, το παντων χαλεπωτατον, there is the question what are we to do with it?

As a general rule, if a book doesn’t change your life, it is either trivial (which is the case in 99.95% of books) or you’re not paying attention.

It will keep you away from the racetrack and exercise your mind, but then so will lambda calculus.

It will turn your mind to piety and moral considerations, if you let it. On a dogmatic level, it will improve your grasp of orthodox theology, if that is appropriate. In a sense more particular, Isaiah’s reflections on political life in Judea can also illustrate our own times. He had sinners; we have sinners. He had corrupt officials; we…well.

It is a simple satisfaction to have met such an important text, and even more satisfying if one can keep it clear in one’s mind, as a unity.  This is not easy, but it can be done, at least in outline. Lots of people visit Paris. How many visitors learn Paris, her centre and her suburbs, high levels and low levels? To have learned Isaiah thoroughly is like loading one of those elaborate CAD structures into your mind and then being able to rotate the whole in any direction.

There are definite benefits, therefore. There is the pleasure of recognizing passages, which we mentioned before. There is also an illumination that such passages are more accurate in the original but lest vivid. We forget sometimes we are strangers.

But it may be the case that the real benefits actualize themselves in their own time and to our surprise.  As we began by saying, to stare fixedly at something is often to miss it. Often, it is later, and in connection with other things, that something we have studied floats into consciousness and illuminates a problem. But it will not happen without the slogging work of the present. So when we read the psalms, Isaiah may speak.  And it is only sometime considerably after an improvement has been made in our life that we can look back and see the difference, sometimes to our shock.

Historical Consciousness and The Roman Road

The Glamour of Scholarship