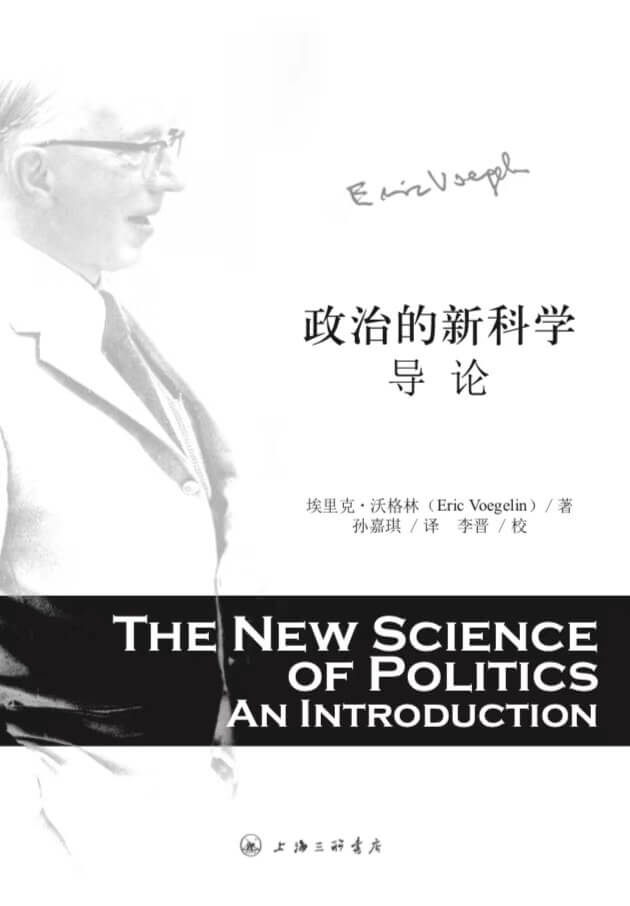 Eric Voegelin’s The New Science of Politics, is probably his best-known book, at least in the sense that it has been in print in English since 1952. By 2000, translations were available in six or seven European languages. It is significant that this remarkable book is now available to Chinese readers. The most striking feature of the book is what might be called the “Gnosticism thesis.” The argument was initially developed over a decade earlier in the chapter, “People of God,” which was part of his then unpublished History of Political Ideas. Had it been published in the 1940s, Voegelin’s analysis in “The People of God” would have ranked with and preceded the comparable works of Hannah Arendt, Norman Cohn, Karl Löwith, and J.R. Talmon as a classic treatment of the origins of totalitarian movements and ideologies. The final version of “The People of God” was finished in 1949. In addition to The New Science of Politics, the “Gnosticism thesis” was further refined in several later writings, notably in his article “Gnostic Politics” (1952), and in his inaugural lecture at Munich in 1958 published under the title Science Politics and Gnosticism. In his late work, the Gnosticism thesis was refined into a concept, derived from the Austrian novelists Robert Musil and Heimito von Doderer, “second reality,” a product of the untethered human imagination. Even so, the Gnosticism thesis served Voegelin’s analysis well for nearly a quarter century.

In chapter three of The New Science of Politics Voegelin identified Gnosticism with “the nature of modernity,” by which he meant not merely changes in political institutions after the end of the European Middle Ages, but also a response to institutional changes in light of new sentiments and ideas or a new “spiritual substance” that, in turn was conditioned and shaped by these same external institutional changes. The immediate historical context regarding the publication of The New Science of Politics was also significant. Voegelin received the invitation to deliver a series of Walgreen Lectures at the University of Chicago in February, 1950. Four months later the Korean War began and Voegelin was then asked to prepare a series of lectures on Marxism. He declined and indicated that a philosophical discussion of Marxist principles was already to be found in his analysis of political sectarianism and eschatological violence of Medieval European Gnosticism. But so too, in Voegelin’s opinion, was the Western postwar “confusion” an example of Gnostic politics, which he likened to a “spiritual disease” or pneumopathology. This confusion resulted in rapid and extensive military demobilization after 1945 and a reliance on strategic nuclear weapons that in turn amounted to an invitation to the Soviet Union and North Korea to resume hostilities in Eastern Asia and Eastern Europe.

Voegelin understood his analysis in The New Science of Politics to be more than a criticism of spiritual disorders located both in the contemporary West and the East. It was also an account of, because based on, a recovery of political science. In Voegelin’s view, political science was the comprehensive study of human existence understood as the human participation in the structure of reality. For Voegelin, the structure of reality included both the history of human action as well as experiences that transcended human history. The latter experiences were symbolized by him as the “depth” and the “beyond.” Human history was conducted between these two transcendent poles. Voegelin derived his language of the depth and the beyond from Western philosophy and Christian theology though the aim of The New Science of Politics was to transcend the historical and cultural context of its composition. This aspect of Voegelin’s work will give Chinese readers the exciting opportunity of discovering equivalent sources of order from within their own philosophical traditions. Political science as a whole will be enhanced by the addition of Chinese voices to the on-going and ecumenical discussion of political reality.

This excerpt is from the Chinese edition of The New Science of Politics: An Introduction.

“Traveling Bags for Their Trip To Russia”: Canadian Right-Women and International Relations during the Cold War: Expressing Dissident Views

Leadership as a Political Process

The Legacy of Voegelin and Strauss