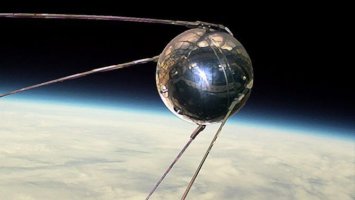 Marshall McLuhan identified our time of postmodernity as the “ecological age” in which technological dominance has become planetary. This undeniable truth is a fact that may be symbolized by the visual image of satellites circling the entire globe. Accordingly, McLuhan liked to use Sputnik as a synecdoche for technology’s global embrace:“To free himself from servitude to his own artifacts has become the main program of the new ecological age that began with Sputnik.”[1]

Today, if we were to update McLuhan’s image, we could say instead something like this: “The Earth that we live on is ‘Google Earth.’” By this we would mean to capture, in a readily understandable image, the planetary slavery to technology that is visible all around us.

Alternatively, we could craft some other kind of saying, one that refers to another manifest technological reality, such as everyone being engrossed in smartphones and status updates: “Click ‘like’ if you don’t want to be a slave to technology.”

In this strange new planetary environment, McLuhan offers us hope with his idiosyncratic brand of innovative analysis. McLuhan’s own brand of Thomist realism affirms that not all reality is socially constructed. After all, McLuhan does recognize that, by way of the senses, we can be in touch with mind-independent realities: natural units, like rocks, trees, and fish.

Because McLuhan’s intuitions and insights are consonant with the deepest wisdom of the scholastic Thomistic tradition, the possibility remains of a fruitful engagement with the human race’s transition into postmodernity. I would argue that, since McLuhan’s discussion of nature transcends the division between nature and culture in an authentically semiotic way, it provides contemporary Thomism with a possible way forward.

McLuhan’s pioneering work clears the way for a living Thomism for the twenty-first century. It goes beyond the realism vs. idealism debates of neo-Thomism that characterized the Thomism from Aeterni Patris to Vatican II. Today, we can now recognize those debates as successfully vindicating mind-independent reality and a philosophical realism. But they did so at the expense of a full account of how mind-dependent reality is woven together with the mind-independent.

Thanks to the latest Internet technologies, which now hold captive the attention of more and more people, human culture is now being woven even more deeply together with nature. This happens in our technologically mediated immediate environmental perceptions: for example, in viewing someone’s new pictures on Facebook.

Because a philosophical focus solely on the realism of the mind-independent is not enough, McLuhan’s project can be seen to exemplify, in a pioneering way, what Pope St. John Paul II spoke of in Fides et Ratio. John Paul recommended engagement with postmodernity, to counteract any of its negative trends and yet build on its positive prospects:

“Our age has been termed by some thinkers the age of ‘postmodernity.” Often used in very different contexts, the term designates the emergence of a complex of new factors which, widespread and powerful as they are, have shown themselves able to produce important and lasting changes. The term was first used with reference to aesthetic, social and technological phenomena. It was then transposed into the philosophical field, but has remained somewhat ambiguous, both because judgement on what is called ‘postmodern’ is sometimes positive and sometimes negative, and because there is as yet no consensus on the delicate question of the demarcation of the different historical periods. One thing however is certain: the currents of thought which claim to be postmodern merit appropriate attention.” (Fides et Ratio #91)

Thomist realism is founded on the distinction among sensation, perception, and intellection (or understanding). Perception and intellection involve mental icons (species expressae), but sensations do not involve mental icons (species expressae, “expressed specifying forms”): sensations are species impressae, since sensation is “actio sensibilis in sensu” (the action of sensed upon sense).[2]

The scholastic argument on this point made by the Thomistic commentators “anticipates, more or less completely, the famous notion of ‘Gestalt’ that would be introduced into scientific psychology in the early decades of the twentieth century” by Wertheimer and Köhler.[3] The notion is that intellection and perception provide interpretations that are not found in sensation: “The field of perception reveals objects in a way and according to properties that cannot be derived from a mere summation of its purely sensory components.”[4]

The key point of Thomist realism is that all other form-processing by cognitive powers (i.e., the processing of environmental forms by formal causality proper to the activity of the organism interacting with the environment)—because they only focus on additional formal objects in order to arrive at the interpretations proper to the action of perception and intellection as distinct from sensation—with this focus, all other form-processing by cognitive powers is founded on the impressed specifying forms of the senses, since the other formal causes involve expressed specifying forms.

The formal causality involved in technological extensions of the human organism, McLuhan realized, can only be founded on the initial sensory inputs of human experience. Therefore the effects upon the balance of perception can be unwitting, unless we are attentive to notice how our percepts are being fundamentally altered by the way technologies adjust the ratio of the sensory inputs; our patterns of perception and interpretation can carry us wherever they will, unless our intellection can perceive those patterns and bring them into awareness and thereby afford us an opportunity for reprogramming and/or reinterpreting our initial perceptions.

McLuhan’s proposal is that we can achieve liberation from technological servitude by making a careful study of pattern recognition in our new planetary environment. It takes spiritual acts of the intellect in order to engage in such activity.

By spotting the patterns of our servitude, we can arrive at not simply a realistic appraisal of the challenges of our new environment; we can also arrive at the sort of meditative thinking, traditionally encouraged by the liberal arts, which will enable us to liberate ourselves from our technological slavery.

In 1977, what McLuhan said about Vatican II is even more recognizably profound for we who are still living today in the twenty-first century: “At the Council of Trent, nobody noticed that it was Gutenberg who made all the problems, and at Vatican II, nobody mentioned the hidden ground of electric information which has created all the moral and theological problems of our time.”[5]

This was originally published with the same title in The Imaginative Conservative on January 14, 2016.

A Response to John Gray’s Seven Types of Atheism: The Relativist and the Missionary (Part II)