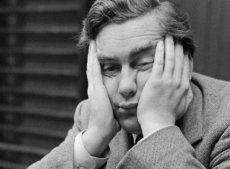 Notwithstanding Valentine’s, there’s not much to be said for February other than that it’s short. February is boring. Boring.

So, let’s talk about boredom.

That boredom is a pain-in-the-behind to its victims, is patent. And there is so much of it! Staff-meetings. Waiting for elevators, waiting in traffic, waiting, waiting, waiting. Paperwork. More paperwork.

And it is a problem to those not themselves bored but who deal with those suffering boredom, as parents with children on holiday know. It is the kiss of death to comedians. Managers — in offices, shops, naval vessels — know the danger of boredom among their crew. Not only does it leads to poor productivity, but even, sometimes, to unwarranted thinking.

Are we more bored than our great grandparents? No, and yes. The percentage of their life that was utterly dull, probably outdid our own, though they had hunger, plague, war, and bears to distract them. On the other hand, we are likely to be more sensitive to this curse. We get a more continual and more intense dose of distraction day-to-day, and our internal thermostat has been re-set. And we are convinced we ought not to be bored, ever. For this your columnist blames, among others, Rudyard Kipling:

If you can fill each unforgiving minute

With sixty seconds worth of distance run…

We expect our lives to be efficient. Efficient! It is the Frank Bunker Gilbrethization of society.

But boredom itself is not…boring. Considerable Research Has Been Carried Out!

A sample from the wiki article:

Boredom has been defined by Cynthia D. Fisher in terms of its main central psychological processes: “an unpleasant, transient affective state in which the individual feels a pervasive lack of interest and difficulty concentrating on the current activity.” Mark Leary et al. describe boredom as “an affective experience associated with cognitive attentional processes.” In positive psychology, boredom is described as a response to a moderate challenge for which the subject has more than enough skill.

But let’s leave theory and focus on praxis.

The primary fact about the irritation of boredom, is that it is, in fact, an irritation. Like any sort of pain, it is unpleasant because a message is being communicated and the message is, if we think about it, that the situation is unsatisfactory, so do something about it.

Your essayist has noticed three species of boredom:

Having nothing to do;

Not having enough to do; and

Having to do things that are uninteresting.

The first case involves all those instances where there is nothing to do except stare straight ahead, such as shopping lines and being put on hold on the phone. What irks, besides the lost time, is the unpleasant sense of enforced passivity, which human nature resents.

Your columnist is not of course in the good advice racket.

Pressed for rules and verities

Give the rich, to please them, riches.

Give to love your hearth and hall.

But do not give advice at all.

But the answer to enforced passivity would seem to be to take action of your own.

Check Google images and find a picture each of ten things that impress you. Put them on a PowerPoint file and run through it about a dozen times. When you are stalled and blocked, run through the images mentally and spend a moment mediating on each of the images.

The author, for example, has ten images

The Golden Gate Bridge at night

“The Raftsmen” by G. C. Bingham

Running through these will kill ten minutes easily. Make your own set. If you like, prepare a list of ten passages of poetry. This will also do, but visual imagery is easier to remember.

This will also work on those short times in the office when you run out of immediate work and it is inconvenient to start something else. Managers hate this. Take out a spreadsheet or a page of figures. Stare at it. Mediate on whatever you have in your mental file. Its better for you than reading Salon.com, and safer.

Having uninteresting things to do is a much tougher proposition.

The only approach that seems to work is to, as it were, go meta. Instead of focusing on the work itself, focus mentally on the fact that you are doing the work. Find ways to automate routine, and run tests with yourself as to how fast or efficiently you can get through the process. In other words, step back from the process. Make the physical person a robot and focus on giving it commands. Instead of just moving the computer mouse, give yourself a command:

That is bad enough, clearly. But the great problem with boredom is that it opens the door to boredom’s big bad brother, Ennui.

Ennui sounds rather glamorous, actually. After all, it’s French! Baudelaire had ennui. Sartre had major ennui and so do his students. The readers of the New Republic suffer ennui, or did till a few weeks ago. The readers of The New York Post are just bored. Ennui presents itself in the shape of boredom as a life-style, meant for those who are so sophisticated that they can’t take anything as serious. Life? Meh. It is all so . . . so tedious, so . . . middle class.

In reality, ennui is a very dangerous condition to be in, and very hard to cure. Ennui has a lot of definitions but we like the formula we heard from the late Dr. E. Bundy that (we are quoting from a distant memory here)

It has sometimes struck the writer, if we may digress for a paragraph, that it is, in a way, lucky that so few people actually examine the principles on which they are operating and follow them consistently. Life keeps us busy enough to avoid self examination. Otherwise our society would be subject to a tsunami of ennui big enough to impress Roland Emmerich were it to roll down mainstreet. The dreadful secret is that our social machinery operates on a set of assumptions that 95% of our citizens do not actually believe. But they don’t think about it.

What to do in this crisis is beyond this writer. If ennui results when the Good goes out of things, perhaps the only way to cure it is to fall in love, with something, someone —Stamp collecting, the lady in apt 2B, or God.

On the other hand, the mere fact of falling in love may be an indication that the cure is already underway. Often a change in circumstances will help – for example, some heat, green leaves and young people in spring clothes going by on the street.

Thank heavens there’s not much left in February.

Hobhouse and Leadership: A Consideration of Liberalism