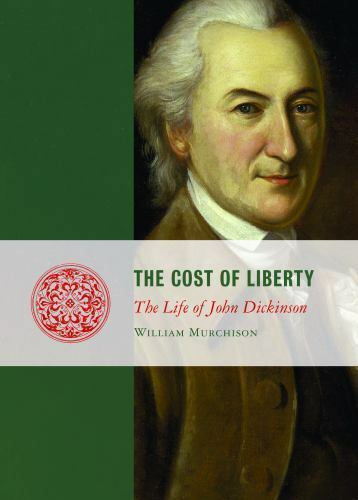 The Cost of Liberty: The Life of John Dickson. William Murchison. Intercollegiate Studies, 2013.

Few habits of speech and thought inhibit our appreciation of those who created the United States of America more than our tendency to refer to them as “the Founders.” Not that the Founders do not form an identifiable group, and not that they are undeserving of the veneration such a term implies. But such usage too often has the effect of herding together a remarkable and unruly cast of characters—men who ventured boldly into largely uncharted territory during a peculiarly fluid and experimental moment in the history of British North America—and seeking to impose upon them an uncharacteristic uniformity, as if they were being shoved into position for an official Olan Mills group photograph.

This in turn has the effect of flattening out the lively and contentious diversity of views in circulation about the shape the nation should take, and it fuels the tendency to regard a handful of texts, such as the articles making up the Federalist Papers, subtle and insightful and influential as they were, as the necessary and sufficient and authoritative expression of the views of “the Founders.”

But the American political tradition is a tradition of debates, and moreover of debates that are rarely entirely settled. Far from being a tradition upheld by massive tomes, its documentary record more closely resembles a patchwork of occasional pieces composed in response to particular circumstances—Tom Paine’s Common Sense, the Declaration of Independence, Jefferson’s Notes on the State of Virginia, the Federalist papers, the Webster-Hayne debates, the writings of John C. Calhoun, the Lincoln-Douglas debates, and more. Most of our greatest political texts were produced in the white heat of political need; none was the product of systematic and detached reflection in the manner of the great treatises of European political thought.

It is, to repeat, a rich tradition of reflection and debate on certain recurrent themes, a political midrash devoted to the endless consideration and reconsideration of such fundamental matters as sovereignty, the separation and division of powers, the meaning of federalism, the sources of political authority, the proper place of religion in public life, and the rights and responsibilities of individuals. If the Founders of the American nation were engaged in the establishment of a “new science of politics,” to use Tocqueville’s term, then one needs to point out that the science was not settled, and still isn’t.

All the more reason, then, to be grateful that the veteran journalist William Murchison has chosen to employ his incomparable pen and vivid historical imagination in the cause of bringing back to life one of the most underrated and misunderstood of the Founders, whose intelligence and courage are badly needed in our time: John Dickinson (1732 – 1808). Indeed, one could argue that Dickinson is not merely neglected but forgotten. There has been very little biographical work on him, and to the extent that present-day readers will be aware of him at all, it will either be from association with Dickinson College in Pennsylvania or from the sour opposite-number portrayal of him in the celebrated 2008 HBO miniseries “John Adams” (or a similarly disagreeable straw-man gig in the less-celebrated Broadway musical “1776”).

Little attention is paid to Dickinson’s eloquent response to the Townshend Duties in 1767, in which he patiently made the case that it was the King and Parliament, not the colonists, who were breaking faith and riding roughshod over the ancient rights of self-governing Englishmen.

Even less attention is paid to his 1797 “Letters of Fabius,” which provided a powerful apologia for the Constitution, though one that was insistent upon the necessity of cultivating virtue in the citizenry—a theme stressed by the anti-Federalists in their arguments against ratification and downplayed by Madison, Jay, and Hamilton in the Federalist. Nor is Dickinson given credit for his tireless work in colonial, revolutionary, and early national politics, including his election to the Delaware and Pennsylvania assemblies and the Continental Congresses, his drafting of the Articles of Confederation, his service in the Continental Army, and his participation in the Constitutional Convention in Philadelphia.

No, he is remembered, when he is remembered, for two things. First and foremost was his refusal in July 1776, despite years of effectively championing the colonial cause, to endorse independence from Britain and sign the Declaration. For this sin he has been made into a Thersites figure, a stick-in-the-mud Founder, or a J. Alfred Prufrock—in any event the perfect foil to play off against the heroic patriots whose spiritedness carried the day at Philadelphia and Saratoga and Yorktown. Left out of this account are the man’s sterling character and consistent record of service to the Revolutionary cause.

Also left out is the fact that his views on independence in 1776, while reflecting an abundance of caution, also reflected a keen appreciation of the enormity of the deed, a realistic sense of the slender chances of success—and a full awareness that his arguments would not carry the day, would be swept aside by the enthusiasm of other Patriots, and the subsequent effects upon his reputation of his refusal to support the Revolutionary cause at that particular moment, in that particular way, would likely be negative and enduring. There is no chapter in books like Profiles in Courage devoted to John Dickinson, but Murchison’s book will convince many readers that there should be.

He knew he would lose and pay a permanent price for it. Perhaps as a consequence, his speech against the act of declaring independence “was not,” Murchison admits, “Dickinson’s grandest oratorical hour.” But who can doubt that he was justified in contending that, absent the intervention of France on the side of the revolutionaries—which was unlikely to occur in the near future, and quite possibly would never happen at all— this revolution could not be won, and the consequences of a succession of bloody and losing battles would be debilitating and long-lasting?

It is further indicative of the man’s character, and also generally left out of the account, that he accepted this setback in stride, saluting smartly, and was not tempted into defecting from the patriot cause by going over to the Loyalists, as some among the defeated did, out of fear or resentment. Instead he chose to take his stand quietly, staying away from the final vote, making his ballot an abstention by absence. He left the Congress immediately, not to go to Canada but to join up with the Continental Army, making him one of the few among the Founders to do so. His devotion to the Patriot cause was total, and it proved stronger than his personal pride.

Murchison gives us a surprisingly riveting narrative, a considerable achievement in light of the relatively economical supply of facts about Dickinson, and he manages to weave into his account a great many quotations from Dickinson that give us a very concrete sense of the man’s mind. Indeed, Murchison shows with especial care and poignancy how much of a loss to the American conservative intellectual tradition, and to conservative ways of reading the Declaration and the Constitution, our neglect of Dickinson has been. Surprisingly, even Russell Kirk chose not to feature Dickinson in his account of American conservatism’s usable past, The Conservative Mind, preferring instead to highlight Dickinson’s frequent foe, John Adams. Had Kirk chosen otherwise, he would have found in Dickinson an even more kindred, if perhaps less loquacious, spirit. As the historian Forrest McDonald has speculated, Dickinson, who was admired even more than Jefferson for the eloquence of his pen and was an older and more seasoned man, might well have been the one invited to draft the Declaration—if only he had signaled a willingness to “swallow his scruples and voted for independence.” Had that happened, McDonald continued, the Declaration “would have been based upon English constitutional history rather than, as was Jefferson’s, upon natural-rights theory—with vastly different implications.”

The traditionalist-conservative tendencies of Dickinson’s mind are made especially evident in Murchison’s account of his approach to the Constitution. The second thing for which Dickinson continues to be known: his words, uttered at the Constitutional Convention on August 13 and transcribed by Madison, that “Experience must be our only guide. Reason may mislead us.” Those words are well-known, but what is less often appreciated is the deeply historical and religious framework out of which they emerged, a framework that is perhaps most clearly visible in the Fabius letters—a text that should be added, along with the “Letters from a Pennsylvania Farmer,” to the canon above, to be read in conversation with the Federalist. Dickinson had high praise for “the judgement of the most enlightened among mankind, confirmed by multiplied experiments,” and accordingly his arguments are not primarily theoretical but based upon historical examples, prudential wisdom, and religious conviction.

Dickinson carried forward into the constitutional era a great deal of the moral concern expressed by many of the anti-Federalists, a concern grounded in classical republicanism, and he thereby provides a good example of a major debate that remained—and, one hopes, remains—contested. He did not celebrate the Constitution as a well-oiled Rube Goldberg mechanism, cleverly designed to make ambition counteract ambition and render virtue optional, but as a “plain-dealing work,” designed to give “the will of the people a decisive influence over the whole, and over all the parts.” He clearly linked the flourishing of political liberty with a high regard for “that perfect liberty better described in the Holy Scriptures.” His sense of history, prudence, and religion all came together in these words, placed in the mouth of Fabius: “History sacred and profane tells us, that, corruption of manners sinks nations into slavery.” The sole antidote to such corruption was “soundness of sense and honesty of heart.”

Not a sophisticated view, perhaps. But a chillingly accurate one. All the more reason to be grateful to William Murchison for bringing this great man back to life and reminding us that he, too, is our forebear, a part of our legacy that we can draw on, if we choose to do so.

This was originally published with the same title in The Imaginative Conservative on February 11, 2014.

Wilfred M. McClay holds the G.T. and Libby Blankenship Chair in the History of Liberty at the University of Oklahoma. He is author of The Masterless: Self and Society in Modern America (North Carolina Press, 1994).

From Big Bang to Big Mystery: Human Origins in Light of Creation and Evolution

Rocky: A Theatre for Heroism