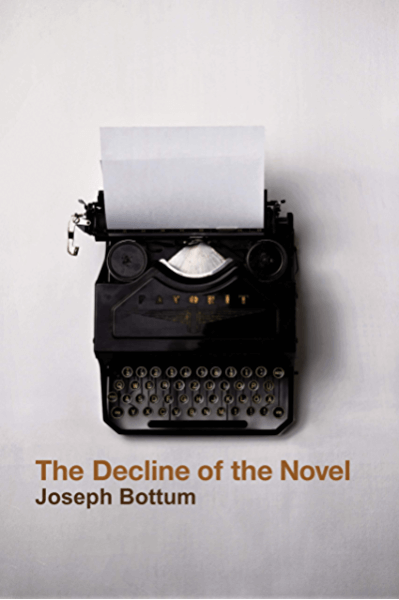 The Decline of the Novel. Joseph Bottum. South Bend, IN: St. Augustine’s Press, 2019.

The advent of the novel and the examination of the interior and domestic life in fictional form coincided with the creation of the modern sense that began with Descartes. In the nineteenth and early twentieth century the novel reached its peak in prestige, rivaling the symphony and motion pictures, as the western cultural art form. However, today the novel is in decline, having been supplanted by Internet chatter and video games, and unlikely to recover its former cultural place in western civilization.

Bottum traces the trajectory of the novel from its origins, rise, and fall. In doing so, he connects the rise of the modern novel with the rise of Protestantism: “the novel was an art form – the art form – of the modern Protestant West” (14). For Bottum, the examination of the interior life, whether in religious conscience or fictional introspection, is the connective tissue between Protestantism and the modern novel. While Don Quixote and Gargantua and Pantagruel are masterpieces, according to Bottum, they lack the interiority of a Nicholas Nickleby, Jane Eyre, or Robinson Crusoe, and therefore seem “unmodern” to contemporary readers.

A second feature that distinguishes the modern novel is that it spotlights the individual rather than the group. In chapter three, Bottum contrasts the Protestant novel with the Catholic one: the former focuses on the individual, like Robinson Crusoe on his island, while the latter looks at the community, such as the transnational group marooned on the island in The Catholic Crusoe. Further differences are Protestant novels see work as something positive and sanctifying compared to Catholic novels where work is reenacting Christ’s suffering. Finally, Protestant novels fail when they become too didactic, while Catholic novels fail when it is at “war with its own form,” meaning that it becomes too allegorical in its telling (40).

The absent of God from the cosmos, the disenchantment of the world, ushers in the modern age where novelists look to class and social manners, the supernatural, sentiments, history, politics, and philosophy to provide answers and direction to human existence. But by the end of the twentieth century, the sense of pretense that pervades throughout the novel has been displaced by the “New Journalism” where fact and fiction intermingle. As mainstream Protestantism has declined so has the modern novel’s confidence in itself as an art form to re-enchant the world in its fictional narrative.

Entertaining and enjoyable to read, The Decline of the Novel presents an account of the art form that is novel. While the book is uneven due to the insertion of preexisting essays, its underlying insight that mainline Protestantism and its corresponding art form, the novel, has lost confidence in itself to make sense of the world, rings true. One can certainly quibble with Bottum’s interpretation of novels and his classification of “Protestant” and “Catholic,” but he correctly points out that the collapse of the interior life not only makes the novel poorer but our own souls, too.