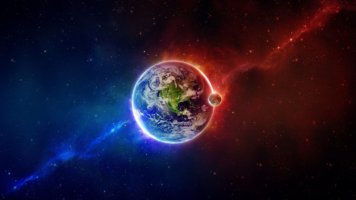 Modern technological innovation has made globalization possible. And globalization’s new social reality is unparalleled in history. Accordingly, it presents politics with new challenges. But it also presents politics with unprecedented technological power to deal with these new challenges. However, the power of these technologies is ambiguous, since they can create two types of experiences: “hot” and “cool.” These two experiences have become intensified, as Marshall McLuhan noticed, in both our cultural and our political realities.

In a fascinating essay on McLuhan’s concepts of “hot” and “cool” media, Eduardo Navas insightfully links the nature of the Cold War to the nature of “cool” media. Dr. Navas illustrates the impact of technology on global politics, noticing that,

“after WWII an understanding for debates to find a middle ground, a cool ground, became the privileged form of political action throughout the world. The Cold War was for this very reason a cooled war, so that the politics could be kept at play at a safe distance by both the United States and the Soviet Union. This cooling was necessary because after WWII the interconnection among countries and cultures that globalization would make even more apparent was obvious to governments and corporations. And something had to be done to make sure there would not be a cultural meltdown.”[1]

In other words, global politics emulated a trend already well underway in culture. It was a trend set in motion by new media. The world needed more cool.

In order to understand this “cooling” in political action, we need first to understand the way that media can “cool down” culture. This becomes apparent once we grasp what McLuhan meant by contrasting “cool” media with “hot” media. By “hot” media, McLuhan meant technologies that enabled a sensory experience of data presented to one sense in “high definition.” Such an experience elicits a “low participation” response because the consequent imbalance (created by the high-definition technological extension of one sense) will overpower the engagement of the other senses. Examples of “hot” media are photographs, film, print, radio, and lectures, which derive their appeal from the promise they offer to one sense in particular.

Conversely, by “cool” media, McLuhan meant technologies that enabled a sensory experience of data presented in “low definition.” Such an experience elicits a “high participation” response from their users, because the relative paucity of data, as presented to one sense, invites the other senses to a more balanced participation in the whole technologically mediated experience. Examples of “cool” media are cartoons, television, and seminars. Relative to other media, we have to fill in a lot more with these types of experiences.

“Hot” media are experienced “like visual space in that they are sequential, linear and logical”, whereas “cool” media emphasize—not the “analytical precision, quantitative analysis and sequential ordering” of “hot” media—but rather a holistic “perception of abstract patterning and simultaneous comprehension of all parts.”[2] McLuhan grounded his contrast between the two types of media (“hot” and “cool”) in the way the brain functions. That is, “hot” media appeal most of all to the left hemisphere, whereas “cool” media instead engage the right hemisphere of the brain.

Using McLuhan’s concepts, Dr. Navas is able to perceive the cultural paradox in which we live. Because of the amount of technology that we engage with on a daily basis, “the level of media saturation at the moment is unprecedented—it is hotter than ever,” observes Dr. Navas. But the paradox is that there has also never been so much cooling happening at the same time. So, why are we able to experience so much “hot” media? “This is possible because media itself is strategically used to make the heating bearable,” he explains.

“Cool” media function socially, to “cool down” culture. The globalization of this experience, created by the new technologies, “has shifted the way people experience the world.” Reflecting on this shift as McLuhan did—namely, as a culturally beneficial “right hemisphere” experience—Eduardo Navas is able to sum up our global situation: “To rationalize is to cool down. To live in the heat of the moment is not. Media has been implemented to make sure these conventions stay in place.”

McLuhan had perceived in the 1960s something that we take for granted today, but that few then appreciated; namely, that electricity has decentralized the world. What makes this decentralization possible is the effect of the new media. Dr. Navas is able to grasp this key point with such acuity because he realizes that McLuhan’s contrast between “hot” and “cool” media is not a binary opposition. Rather, they are essential descriptions of the dynamic effects of media, which today involve unprecedented amounts of “heating” and “cooling.” Thus, when he wrote his essay in 2009, Dr. Navas rightly observed the nature of today’s technologically mediated cultural world: i.e., in this world,

“there is no center or periphery as understood in binary thought; the world has been converted into a grid—a network that allows people to deal with their immediate reality in large part according to the social structures implemented by the pervasiveness of networked culture—this is the ultimate stage of cool. While this cooling may be necessary for people to cope with population and media density, as McLuhan himself notes already in his own time, it is also essential to keep in mind, as I have implicitly argued throughout this text for media, that the cooling has also taken place out of economic interests from media developers who need to find ways to stay productive.”[2]

This mixture of “heating” and “cooling” is an ongoing paradox, because “the cooling of media also pushes for heating to take place.” That is, media need “hotness” to engage people with a compelling sensory experience. And yet that experience cannot be one of sensory overload, otherwise the consequent “noise” that people experience will not engage them in a compelling way.

A “convergence” of hot and cool is therefore what Dr. Navas finds at work in the marketplace of global culture, thanks to the ongoing innovations in mediation provided by technology. As he puts it: “Convergence is the privileged model of media delivery. Convergence cools media and culture with the purpose to attract people’s attention—to turn an item or product hot and be noticed at least briefly.”

The paradox of our technologically created cultural experience is therefore a “constant tension” within the media: We need to experience just enough “coolness” so that we are not overwhelmed by “hotness.” This has now become an ongoing engineering problem for the human race. Our technological devices deliver experiences; and yet these devices must be engineered to provide just the right amount of flow that engages the “attention span” of the users.

The ongoing problem is thus one of balance: to keep the hot, hot, and the cool, cool. But the problem can never admit of a static solution, due the dynamic nature of the ever-changing cultural feedback loop. What’s hot today won’t be experienced that way forever. Yet Eduardo Navas rightly recognizes the merits of precisely this kind of globalized cultural experience. He describes our “networked culture” as a triumph of rational, right hemisphere experience, by which we now live in

“the ultimate cooled place, a virtual non-place that is always accessible in the same way as long as a connected device is available. The network is the place where information flow is best monitored. It is the place where people interact with others more than in physical space. It is also a place where people can work at their convenience or leisure . . .  All this is designed to make sure that the consumer will be reached, and to make sure that products will break through the noise that media itself creates. Networked culture then is the most efficient and best controlled space, and as it has developed it has been cooled, both out of necessity for people to deal with the content it delivers, as well as the sake of making a profit.”[3]

The ongoing challenge, both cultural and political, is thus to preserve the right balance of “hot” and “cool” whenever the “creative destruction” of a new technology disrupts the balance of power in today’s global theater. We need to be able to grasp—not just sensorially, but intellectually as well—the potential “cooling” properties of the latest “hot” new thing. For only then can we safely conduct the new “Cold War.” In this technological balancing act, we strive to transform globalization’s safe space for hot media, into a world fit for human habitation. We want to keep Earth a cool place to live.

This was originally published with the same title in The Imaginative Conservative on August 10, 2016.

Oedipus Rex in René Girard’s Violence and the Sacred