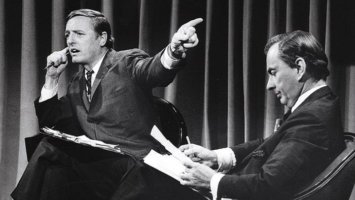 The documentary film Best of Enemies (2015) is not just a compelling chronicle and contextualization of the famous 1968 television debates between William F. Buckley, Jr., and Gore Vidal. As the sequence during its closing credits makes clear, the documentary also aims to provide us with nothing less than the origin story of our current digital age of polarized politics. The trend to polarized debate found its catalyst with ABC’s unplanned ratings success with WFB versus Vidal, as anchorman Howard K. Smith gave the two men the latitude to really rip into one another in a way never before seen on television.

Our polarized digital age has witnessed the displacement of the power of the traditional media establishment as arbiters of public opinion. The U.S. now has a president who openly disparages such traditional media sources as “fake news” and who appeals instead to alternative media tools like Twitter. The significance of this shift can best be appreciated by turning to the thought of Marshall McLuhan, which permits us to appreciate the “formal causality” inherent to the technological tools themselves and their impact on the political and cultural environment.

If we do not reflect on and make deliberate use of our digital tools, we tend to unwittingly favor what McLuhan called “hot” media that excite and stimulate us. The “cool” medium of a television debate can get “heated up” by insults, as with the famous exchange in the ninth episode of Buckley and Vidal:

Vidal: People in the United States who happen to believe that United States policy is wrong in Vietnam and the Viet Cong are correct in wanting to organize their country in their own way politically. If it is a novelty in Chicago, that is too bad! But I assume that the point of the American democracy is you can express any point of view you want to –

Vidal: Shut up a minute!

WFB: No, I won’t! Some people were pro-Nazi, and the answer is that they were—they were well treated by people who ostracized them. And I’m for ostracizing people who egg on other people to shoot American Marines and American soldiers. I know you don’t care, because you don’t have any sense of identification –

Vidal: As far as I’m concerned, the only sort of pro- or crypto-Nazi I can think of is yourself. Failing that, I will only say that if we can’t have the right of assembly –

WFB: Now listen, you queer—stop calling me a crypto-Nazi or I’ll sock you in your goddamn face and you’ll stay plastered!

WFB: Let the author of Myra Breckinridge go back to his pornography and stop making any allusions of Nazism to somebody who was in the infantry in the last war –

Vidal: You were not in the infantry, as a matter of fact —

As we learned back in 1968 from this encounter, the excitement of a “hot” media experience is addictive. Today, there is a similarly visceral satisfaction in unleashing or enjoying “hot” tweets via Twitter that take the heated WFB/Vidal type of encounter to a whole new level of digital polarization.

As the Best of Enemies documentary suggests with its brilliant closing sequence, television political coverage seized upon the “hot” promise of what came as a media revelation with the WFB/Vidal encounter. Given the choice, people would rather watch flat-out conflict and crosstalk rather than a more plodding format of elevated discourse and sober deliberation. Eventually, the television medium (as well as “talk radio”) would develop this trend to its logical conclusion, with separate and decentralized channels made available to deliver the peculiar brand of heated debate most favored by each demographic audience.

But then, what comes after this new type of television and radio? Today we witness the digital technologies unleashed by the Internet that exacerbate the television and “talk radio” trend towards more and more heat. People are given compelling new “hot” experiences over social media that take their eyeballs away from traditional network television broadcasts. The reductio ad absurdum of the whole trend to hotter and hotter media experiences then comes with today’s extremely popular meme involving the characterization of some types of media as “fake news.”

Seen from the standpoint of McLuhan’s media analyses, however, this accusation reveals how thoroughly the formal causality of digital media is now invisibly acting on its users. The heated insults are no longer simply contained within the content of a program, as with the WFB and Vidal exchange, but now they are externalized as the very form itself under which users of the media consume their chosen channels of content delivery. That is, they select which channels they deem “fake” and which are not. Every mouse click is a “like” that declares what is “fake” or not; under this form, the digital medium is thoroughly identical with the message.

Whereas previously it was merely Vidal telling WFB that his claim to have been in the infantry in the last war was, in effect, a “fake” claim, now we have today’s users of media telling each other who is “fake” and who is not. In other words, the medium can no longer simply be confused with its content, such as the argument between WFB and Vidal watched on television that was the memorable content served up by ABC on August 28, 1968.

Rather, the medium itself has become the dominant content trend, as television has now reshaped itself to deliver the type of “heat” that WFB and Vidal demonstrated it was capable of delivering to evident viewer satisfaction. McLuhan’s “cool” medium of television thus became progressively hotter and hotter in accordance with user response. Since then, people have discovered even hotter sources of stimuli on the Internet, as traditional network television now leaves most people “cold” with its comparatively boring sensory stimulation.

New technologies thus tend to have a violent effect on the human environment. In the case of television, we first witnessed the potential of this medium to bring people together. The world used to unite around broadcast television to witness public events like the moon landing or Olympic sports. But now there is a new digital environment, in which technologies have decentralized the delivery of content by the medium. The result of this digital decentralization is that there is a trend to degeneration in the type of content that is delivered.

Again, it is McLuhan’s achievement to have pointed out to us that we should not think only about media content. More important is the media form, which not only shapes the content, but also shapes the users of the media forms. Best of Enemies is able to show us how networks eventually realized that they could harness their media form to have more and more argumentative encounters on television. Not only that, the trend would eventually send users to newer digital technologies that use the Internet to heat up their sensory experience. The users themselves became more and more polarized, which is evident in contemporary political trends.

Admittedly, we have a sensory bias towards the hot. But we won’t be able to cool things down in real political life unless we deliberately make use of technology to temper our penchant for media excitement and hot entertainment. Our tools will control us if we do not control them. But we are incapable of controlling them if we do not even understand, with McLuhan’s help, how the medium brings its own dangerously imperative message of formal causality to us: “If it’s not hot enough, then it’s fake!”

None of us can escape the reach of the media these days. That’s why it’s so important to realize that “We Are the Media” is the most important insight we can have about our own contemporary digital selves. The media, through its formal causality, has so profoundly reshaped us—and yet we are hardly aware of the many ways in which it has.

One example will illustrate. When the Oscar for Best Picture was announced at the 2017 Academy Awards, it was incorrectly announced to be La La Land and not Moonlight because the wrong envelope had been given backstage to the award presenters. The person whose job it was to give the correct envelope had apparently distracted himself from handing over the correct envelope by taking a picture of Emma Stone and posting it on Twitter.

If the compulsion to document and broadcast our lives with smartphones over the Internet had not become so unquestionably ubiquitous, would this have happened? Instead, the addictively “hot” stimulus of digital engagement has reshaped everything from the Oscars to presidential elections. This means that—because the formative imperatives of the media now touch us all and not just people on TV like Vidal and WFB—now more than ever since 1968, we need to learn how to keep our cool.

This was originally published with the same title in The Imaginative Conservative on March 7, 2017.