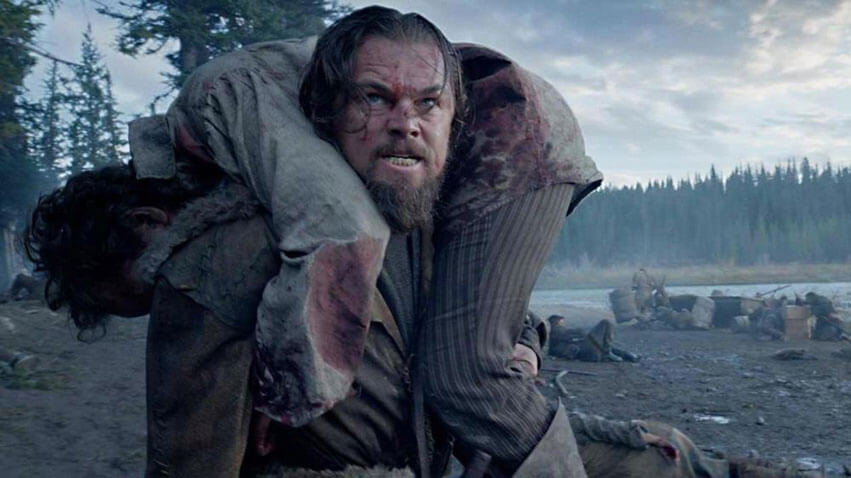 From our moral failings to the vulnerability of the body, humankind’s fallen condition is brought out in brutal clarity in The Revenant. The horror of our mortal existence is amplified in the film, where the aloofness of a Creation that will offer no compassion while witnessing human suffering is made abundantly clear. Life is portrayed as little more than a passage into death, it seems. Some of the scenes of suffering seem contrived unnecessarily, and sometimes the scenes seem deliberately constructed so as to suggest that a meaning to life is indeed elusive if not downright irrelevant. For example, when we see the suffering Hugh Glass emerge naked from the hollowed out body of a horse we may be tempted to search for notions of rebirth or new spirit for the character, when in fact sleeping inside a dead horse is nothing more than a cringe-worthy event required for survival, plain and simple. It seems Glass, and perhaps all of us, are stuck in the mire of physical existence in a nearly chaotic universe. We are only suffering characters unable to realize the freedom of spirit we have been endowed with. The only thing we can do in this life is take on our yoke of suffering and “keep breathing,” as Glass says. Keep your feet moving, endure the pain, and keep living, damn it all anyway.

When we look past the brutal portrayals of lives lived, we can see that The Revenant does in the end recognize the poles of good and evil governing the tensions within which our lives are carried out. However dangerously close life drifts towards meaninglessness, in the end the characters are guided by love and justice, or conversely, entrapped by self-interest and a desire for wealth and power. First is the character of Glass, who is inspired and guided by the loving memory of his departed wife. She is present with Glass in spirit as he continues to love and care for their son. When the tale descends into the dangerous waters of vengeance we see that Glass is still a fallen character, although Glass in the end is not the ultimate deliverer of that vengeance.

Then there is the trapper John Fitzgerald, a deformed but capable bush man with a singular focus on profiteering. Fitzgerald is a supreme pragmatist with his own well-being governing his moral life. God may or may not exist, but if he does, God is far from this fallen world. When explaining the foundations of his understanding of life, he shares with the young and innocent Bridger that his father, starving on a hunt climbed a tree and found religion. God, it seems, came to him in the form of a fat squirrel, and his father shot that squirrel and ate it. Fitzgerald even suggests to the young Bridger that because he saved his life, the young man should look on him as his God. Bridger is an innocent in this tale, and a character who recognizes human suffering and responds with compassion. When seeing a suffering survivor of violence, Bridger leaves food behind for the woman. He is also careful not to reveal the woman’s presence to Fitzgerald, who may well have mistreated her.

In the meantime, Bridger not only asks the morally pertinent questions surrounding the life of the wounded Glass, he acts instinctively for the good while caring for Glass. He also carves a spiral onto Glass’ water bottle, a spiral that will ultimately play a role in revealing the evil machinations of the devious Fitzgerald. The spiral can be seen as a beautiful, almost effeminate design, and it can be recognized as a symbol of eternity placed by an angelic character. This spiral plays a redemptive and a condemning role in the telling of this tale.

In the ruins of a church we also see the tensions governing human life. In a vision, Glass, grieving the loss of his wife and son to human violence and hate, enters the fractured sanctuary beneath a tolling bell. As he comes to embrace his dead son we see the images of good and evil on the church walls, as well as the crucified Christ in the middle of the scene. This world is truly full of suffering for humankind, but we have been redeemed. Meaning and purpose can be found in this life, even in our darkest hour. The dead are free, and the dead can still walk with us and guide us. Glass awakes from his vision embracing a tree trunk, a symbol released into the tale by his wife, who reminds Glass that in a storm a tree may look ready to fall until you see the solidity—the permanence—of the trunk. The suggestion to the viewer of the film suffering their own pain may be to remember the trunk, the eternal permanence of divine presence, anchoring their life. This anchor can inspire a determination to live, and to live well, guided by something good and right.