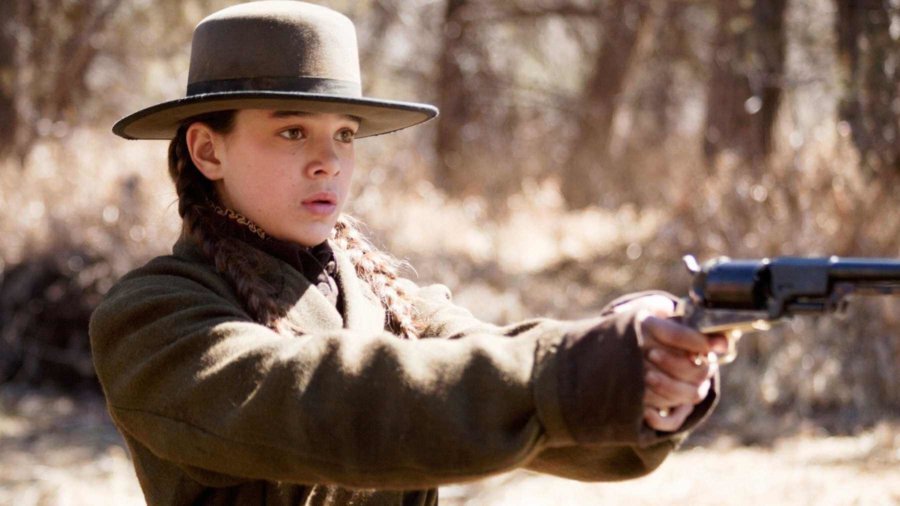 A bible verse from Proverbs 28:1 sets the stage for this movie, “The wicked man flees although no one pursues him . . .” The tale of 14 year old Mattie Ross’ father being murdered in cold blood by Tom Chaney, and Chaney’s subsequent escape into the wilderness, makes the proverb immediately applicable. But then we forget about Proverbs as the adventures of the determined Mattie Ross begin in earnest. She strikes a bargain with US Marshall Rooster Cogburn, and by extension Texas Ranger LaBoeuf, to bring Chaney to justice in a Fort Smith courthouse. While Texas Ranger LaBoeuf strikes one as clownish and inept, in no small part because of Mattie’s cold assessment of him, Cogburn comes across as not only a tough and clever lawman, but also as a broken man. We learn of his loss of wife and child, and his tendency to over indulge in the whiskey is on full display throughout the film. I am not sure if the viewer of this movie concerns themselves with the successful capture of the murdering Tom Chaney as much as in the tenuous relationships keeping the pursuers together as a band in pursuit of justice. We want everyone to be well.

As Mattie’s search for justice continues, we witness the tensions present among the Knights seeking justice. In particular, the foibles of LaBoeuf and Cogburn become too much for either of them to bear, and the group disbands. But when the tension reaches its peak we see how when the chips are down, the righteous bind back together. This, combined with Mattie’s unwavering goal of bringing her father’s murderer to justice, reminds us of the unspoken second half of Proverbs 28:1: “. . . but the just man, like a lion, feels sure of himself.” Chaney is indeed immature and a coward, and so he flees. But those pursuing him, in particular Mattie Ross, are on a righteous mission, and dangers are faced instead of run from, and the discomforts of the trail endured without complaint.

As the story builds to its climax, two pieces fall into place. One is the cost of vengeance. While the original mission into the Territories was to find Chaney and bring him to justice, the unexpected left Mattie alone with the murderer, face to face. With a gleeful shout, Mattie declares Chaney’s guilt and sentence—death. And so it comes, without the blessing of the law. This vengeful act, and the kick of her pistol, throws Mattie into the dark depths of a deep hole in the ground, the land of the dead. Vengeance is a tricky business, and there is a price to be paid when our vision is not led by the unfailing light of justice, but is instead directed by blind passion for personal satisfaction. Once in the shadow of evil Mattie is struck by a rattlesnake. Her soul has been harmed, and the proverbial pound of flesh has been taken as payment for her straying too close to the Temptations. Perhaps the rosy red apples in the Fort Smith boarding house at the beginning of the film are there to remind us of the temptation to play God. In either case, as we observe a mature and rigid Mattie years later, it seems that she has indeed been banished from a happy life, treading alone in the passage of time.

After the rattlesnake bite, we see true grit indeed. If it was exhibited through the story, it was difficult to identify outside of Mattie’s unwavering focus on the mission for justice. But now Cogburn’s true colors come to the fore. Although wounded himself, he becomes utterly focused on the rescuing of his 14 year old partner. He rides through the night, and after running his horse to death, begins to run through the Territories carrying the girl himself. Time spins as the stars trace Mattie’s soulful flight from the depths of hell to the purgatory of an isolated cabin where first aid may be found. In this mystical arc, Cogburn the Rooster (a range of symbolic meanings are attributed to the Rooster, including vigilance, a call to prayer, and Peter’s denial), like a Guardian Angel, disappears from Mattie’s life, never to be seen again. “The only thing free in this world is grace,” says a middle aged Mattie in reflection, and yes indeed, “time does slip away from us.” True grit seems a requirement to deal with time’s disorienting pressure amidst the follies and injustices experienced in our human community.