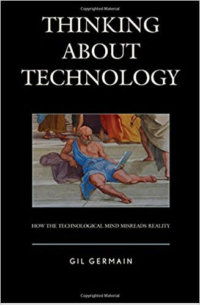 Gil Germain’s Thinking About Technology: How the Technological Mind Misreads Reality argues that modern technology has obscured, and continues to obscure, humanity’s perception of reality. It does so by masking the true nature of human existence, which Germain characterizes as an erotic encounter with the world around us. Germain frames his analysis of modernity’s ails with a close reading of George Saunders’ short story “Jon” (The New Yorker, January 27, 2003) and Plato’s Phaedrus, offering the latter as a counterpoint to the shallow, consumerist life of Saunders’ protagonist. Ultimately, however, the purpose of Thinking About Technology reveals itself in the author’s exhortation to “take the crooked path,” and thereby reject technology’s prioritization of “efficiency” (133). While Germain’s examination of the effect of technology on modern man is certainly welcome, the book itself too often falls to abstract theorizing, or strawman attacks against “we moderns.”[1] Readers already nebulously suspicious of modern science and technology will likely find the book affirming; however, it does not make a significant contribution to the debate about technology, politics, and posthumanism that is urgently needed amongst political philosophers.

Thinking About Technology is at its best when discussing Saunders’ “Jon”, a science fiction story of a man who lives a life determined entirely by advertising and consumption, who nevertheless falls in love with a woman, conceives a child with her, and leaves his sterile world behind. Germain analyzes the story with both style and substance, leading the reader to wish for a standalone piece situating “Jon” amongst the enduring debates of political philosophy. He argues that, “[t]he power of erotic yearning [on the part of the protagonists] stands in stark and uncompromising contrast to a world where everything is treated as an object of actual or potential control” (10). It is, in fact, this desire to control every part of nature that Germain identifies as the primary danger of the technological mind. To understand this will to control, Germain wisely turns to Enlightenment thinkers such as Francis Bacon and Rene Descartes; however, his engagement with their thought is only cursory, abandoned before really engaging with the nuances of their varied, subtle arguments about science, politics, and philosophy.

At several points, Germain indicates his belief that, if we continue down our current technological path, the future of humanity is inevitably posthuman. Yet, he maintains that, “[A]n inquiry into posthumanism cannot start with an analysis of what it means to be human” (44). Confronted with this statement, a reader may well wonder, why not? Germain opposes posthumanism, and transhumanism, but does not offer a coherent argument for his opposition. He clearly believes that something important would be lost in the transition beyond Homo sapiens, but refrains from articulating exactly what that might be. To my mind, what does political philosophy have to offer on this issue, if not the tools to allow us to identify which aspects of humanity we do not want to lose as we evolve away from our current form?

The author acknowledges that technology has allowed humanity to make great strides in correcting horrors such as famine and disease, yet proclaims that “it remains problematic that our humanity is tied to our capacity to rid the world of its ingrained injustices” (45). To do so, he asserts, is to endorse the “risible claim” that each successive generation is “more fully human” than the last (Ibid.). Why is this claim risible? After all, Francis Bacon believed that mankind’s impulse towards universal charity was powerful enough to harness the power of both science and religion. I do not mean to suggest that Germain is correct in saying that to support this argument is to claim we are becoming “more fully” human; but are we not, perhaps, becoming better at being human? To be sure, the modern technological world offers horrors undreamed of in earlier ages; but it also offers undeniably improved opportunities to live a meaningful life for a majority of human beings. This is especially true in the case of women, who, thanks to technological advancement, are infinitely more likely to have the opportunity to: 1) engage in political, intellectual, and economic pursuits, and/or 2) survive childbirth to raise their children.

After several chapters of attributing all manner of unsavory attitudes to “we moderns,” without a serious consideration of the vast, varied opinions displayed by modern thinkers, Germain’s final chapters offer advice for recovering one’s relationship to an erotically charged world.  For the most part, these recommendations, such as meditating, appreciating natural beauty, and reminding ourselves of the limitations of human understanding, are universally beneficial, and would be especially beneficial to college students beginning to develop independent thought and judgment. Ultimately, however, Thinking About Technology is better imagined as a series of lectures delivered to curious undergraduates, than an important scholarly contribution to political thought.

[1] Germain invokes this phrase innumerable times throughout the text, utilizing it as a stand-in for all people living in the modern world.

The Political Meaning of Common Sense

In Defense of the Dignity of Politics: A Review of Tilo Schabert’s The Second Birth. On the Political Beginnings of Human Existence