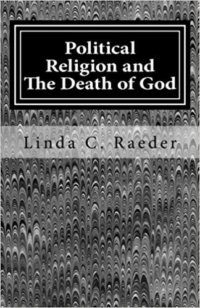 Although it seems more appropriate to call this slender volume an essay rather than a book, it nonetheless contains a dense summary of what political religions are and how they have made so much progress in replacing Christianity in the modern world. Raeder, a Professor of Politics at Palm Beach Atlantic University, bases her analysis on Eric Voegelin’s work on political religions, as well as on his Science, Politics, and Gnosticism and The New Science of Politics, supplementing Voegelin’s analysis with more than forty other authors and her own earlier book, John Stuart Mill and the Religion of Humanity.

Raeder opens her essay with the Social Gospel (and Progressive) leader Washington Gladden’s statement that the state is “far higher and more godlike” than a mere police force. In this modern ideology the “divine” state becomes the immanent replacement for the transcendent Christian God through a process driven by various forms of socialism, particularly Marxism, as well as related ideals of social justice. Because ideologies are actually false or “second” realities their language is corrupted so that in recent years important fundamental concepts such as law, rights, justice, equality, and tolerance have undergone a significant change of meaning. For the past few centuries ideologies have been laboring to eliminate God in order to deify man, a process that in the absence of Christianity probably never would have taken place because it is really, in Voegelin’s and Raeder’s analysis, a revolt against the demands that Christian faith makes on the psyche. The ersatz religions, such as Marxism and Auguste Comte’s Religion of Humanity, have been created to fill the spiritual void, but to the extent to which they have been politically successful they have brought about considerable instability and some of the worst evils in history. By their nature ideologies are relentlessly aggressive, expansionist, and intolerant rival “truths” that cannot coexist with belief in a transcendent God.  The divinized state is their avatar in a dedivinized cosmos, something that is daily apparent in the increasingly emboldened efforts by the radical Left in the United States to silence and suppress, or at least marginalize, Christians and Christianity.

Readers who are familiar with Eric Voegelin’s work will not find much new here. On the other hand, this is such a clear and well written account of the ongoing modern campaign to immanentize transcendence and replace God with the almighty State that it should be quite illuminating for students who have sufficient intellectual preparation to understand it. They will, of course, need a teacher to take them through it almost sentence by sentence and to explain the significance of terms and names such as Joachim of Fiore, Gnostic symbolism, pneumopathology, the balance of consciousness, and the difference between the immanent and the transcendent, because they have had the misfortune of coming of age in a world in which philosophers have been replaced by hordes of philodoxers (which will also require explanation). Anyone teaching a course in the problems or crises of modernity or in modern political thought will find this short work a rich, compact, and entirely affordable (at $5.95) text that, in a mere thirty-nine pages, lays out the origins and development of the major spiritual problems of Western civilization so clearly that by the time they reach the last page students will have acquired a much more profound way of understanding the world.

Game of Thrones and Theories of International Relations