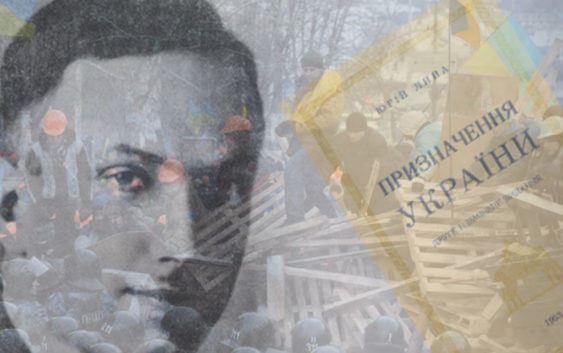 In the mid-1930s, the Ukrainian writer Yurii Lypa compared the Ukrainian nation to an island in his book Pryznachennia Ukrainy (The Destiny of Ukraine):

“The Ukrainian race is an island among its neighbours, an island with its own life, its own holy things and all-human values. Foreign and imposed spiritual values are worthless, and even non-imposed values are adopted in time, only if they pass the nation’s test . . .The Ukrainian race is an island, and this is its worth. All the values of humankind are measured against its own values. For Ukrainians, the most important world-view meridian is the one that runs through Ukraine.”

Now, an important note before we continue. While the term “race” is often connected to notorious legacies—of Nazism, of slavery—Lypa was writing in the legitimate dictionary sense of “a tribe, nation, etc., regarded as of a distinct ethnic stock.” According to Tetiana Podkupko, the usage of “race” was entirely in the spirit of the epoch and was used by many scholars in 1930s. Lypa’s “race” was never limited to a narrow genetic meaning, but rather meant a broad national identity.

What makes the Ukrainian nation an “islandish” one, according to Lypa, is a tradition of perceiving itself “from the outside.” Ukrainians draw the borders of their “island” by self-defining where Ukraine starts as a state. On the one hand, this helps them to regard their nation as a wholistic, territorially bound unity. On the other hand, this allows the Ukrainian nation to be quite decentralized and “patchy” within its settlement territory. Drawing a comparison to the real world, Britain provides a suitable example: a single island with numerous interdependent political and ethnic factions living on it—all of these factions can be called British. Lypa admired Great Britain, by the way, and would compare Ukraine to it.

Another “islandish” feature of the Ukrainian nation is that its identity can be concealed in the face of danger. Lypa states that even if they are conquered by foreign invaders, Ukrainians keep on maintaining their way of life, continue living on their own “island.” This usually misleads invaders into thinking that the Ukrainians have been assimilated, but they are not. They are always aloof, minding their own business, and their true nature can reveal itself at the proper time.

Ukrainians are also very good at what Lypa terms “racial solidarity.” This can be defined as a feeling of national unity and readiness to mobilize around shared objectives. According to Lypa, however, effective mobilizations do not occur as explosions but as a continuity. He warns against explosions, one of which had taken place in 1917 and ended badly. Above all, the feeling of a nation as a balanced and functional organism should be cultivated.

Lypa also emphasizes the insular readiness of the Ukrainian nation to engage in external struggles, which include withstanding external pressures. Under pressure, the nation self-organizes and becomes self-sufficient—or, as Lypa puts it, Ukraine approaches its identity median and introduces order into daily life. Self-organization under pressure is crucially important for nation-building, and it makes Ukrainians very productive, deliberate, and efficient.

In a word, Lypa regularly portrays Ukrainians in contrast to foreign invaders, who do not understand the insular nature of Ukrainian identity and try to change it, but they fail. He also portrays the nation as a holistic unity which may be eroded on the surface, but always stands rock-solid against all odds—an island.

By referring to Ukraine’s island destiny and presenting it as a metaphor to its indigenous identity, Lypa touches upon some very important layers in the collective memory of Ukrainians. In particular, these references evoke the historic images of the island of Khortytsia in the iconic Dnipro River, and the Cossack semi-state of the Zaporozhian Sich that was built upon it. A sovereign fortress on an island in a hostile external environment—it’s the very core of the Ukrainian identity.

Now, one may reasonably argue that metaphorical writings from the 1930s are too naïve and have little to do with real-life Ukrainian conditions. But is it really so? Here we have a couple of examples which prove that Lypa might not have been that naïve. In point of fact, the structure and values of the Zaporozhian Sich, as well as its “islandish” modus operandi, have reinstalled themselves in numerous political and cultural landmarks in contemporary Ukraine. Because of their wide-scale social resonance, these reinstallations have led to the construction of what Lypa called the meridian of the Ukrainian nation.

Let us, for instance, take the EuroMaidan Revolution of 2013–14. This is how Aleksei Levinson described the protesters’ camp on Independence Square. Please note, this report was made by a Russian scholar—a foreigner who was observing the events “from the “outside”:

“Prototypes of the form of organization they set up can be found . . . in the history of Ukraine—specifically, in the organization of Cossack units at the Sech [Ukr: Zaporozhian Sich] and, later, in partisan formations during numerous wars on the territory of Ukraine in the twentieth century. Such forms are still preserved in the collective memory as things that are accepted as natural and reasonable in the given situation. The participants were deployed in squads and platoons representing specialized groups . . .Eventually, these units were assigned to particular locations on Independence Square (Maidan) and nearby blocks . . . Among the others who came to stand watch there was also a highly developed organization in action. Hundreds of people took upon themselves the logistical functions of supplying the Maidan with essential provisions, equipment, and food. The Maidan had a kind of distinct economy of its own.”

This quote by Levinson prompts us to make a few deductions. First, the camp on Independence Square was clearly a reminiscence of the Zaporozhian Sich. The camp resembled the fortress on the island of “freedom” that struggles to survive in a hostile external environment. The latter poses an existential threat to the core values of the fortress. Second, the camp was constructed and maintained by Ukrainians who self-mobilized around shared objectives. Here is a fine example of Lypa’s “racial solidarity”: a social explosion under pressure that leads to immediate forms of productive coexistence. Third, the shared objectives and sense of purpose of the people on the square materialized regardless of the prevailing expectations. Against the forces of Ukrainian President Yanukovych and his Russian backer, President Putin—which should be regarded as foreign invaders—who did not foresee any wide-scale protest to take place, the “insular” identity of the Ukrainian nation revealed itself. Demonstrating their dissent, the people proved that the countless Russian imperial, Soviet, and post-Soviet denationalization programs had failed, in the same way that Lypa had argued they would. Fourth, the camp on the Maidan had its own specific values, structures, and modus of existence. It was a state within a state, which perceived the outside world through the lens of its survival interests. Here you may recall Lypa’s statement that the values of humankind are measured by national criteria. Or that the only meridian which matters to Ukrainians is the one which runs through Ukraine. Finally, the EuroMaidan experience refined the Ukrainian national and civic identity. A new generation of citizens and leaders was born on Independence Square. Moreover, a fundamental reassessment of national priorities and objectives took place—in particular, a re-evaluation of Russia’s role in Ukrainian political life. Again, this is what Lypa wrote about: national refinement under pressure.

Actually, this was not only the camp during the EuroMaidan Revolution that resembled the Cossack Sich. If we look at all three major Ukrainian revolutions—in 1990, 2003–04, and 2013–14—they invariably included “identity fortresses” constructed on “islands of freedom” (usually Independence Square, or the Maidan, at the centre of Kyiv). The events which took place within the “walls” of these “fortresses,” and especially their outcomes, were groundbreaking for Ukraine’s nation building process. In the aftermath of the revolutions, the events spilled over into greater Ukraine and led to reboots of the state system. These revolutions surely varied in effectiveness and continuity, but they always took place.

Today, the dynamic and bright cultural phenomena that we can observe in contemporary Ukraine also reflect an “islandish” identity and “fortress” values. In cinema, for instance, a major box office success in the history of Ukrainian cinematography is the film Cyborgs: Heroes Never Die. It’s about a group of highly motivated soldiers from different backgrounds who defend Donetsk Airport from Russian attacks, and their dramatic experiences. Another promising film, still in production, is Cherkasy, about sailors whose minesweeper was blockaded in Donuzlav Bay during the Russia’s annexation of Crimea, but the crew nevertheless heroically tries to break through into the open sea. Or the historical fantasy Storozhova Zastava (Stronghold), about a garrison’s guard outpost that helps to protect the lands of Rus’ from Cuman raids (Polovtsians). In all these films, as well as in numerous others, we clearly see the same leitmotif: a comparatively small group finds itself in a very hostile environment and struggles to achieve its survival objectives. On the way to achieving their objectives, the people withstand enormous external pressures and confirm the rightfulness of their values. They also discover new forms of cooperation and become more productive, purposeful, and efficient. This is exactly what Lypa wrote about, quite prophetically indeed!

Therefore, regardless of its metaphoric nature, the perception of the Ukrainian nation as an “island” and Ukrainian identity as a “fortress” can be quite productive. This perception may not wholly explain all political and social situations, but it is still worthy of consideration and needs deeper study.

The results of my research on Ukrainian national identity are presented in my book Ukraine and Russian Neo-Imperialism: The Divergent Break. I will also have the opportunity to engage in deeper research as a John Kolasky Research Fellow at CIUS this year.

This was originally published with the same title in The Forum of Ukraine Studies on February 15, 2019; Also see “Lysiak Rudnytsky’s Prescience: Ukraine’s Political Turbulence and Trauma of a ‘Non-Historical’ Nation.”

Ostap Kushnir is an Associate Editor of VoegelinView, Assistant Professor of Political Science at Lazarski University in Poland, and Lecturer at Coventry University programmes in the United Kingdom. His academic interests include geopolitical and identity-forming processes in Central and Eastern Europe, specifically in Ukraine and the Black Sea region. He is the author of Ukraine and Russian Neo-Imperialism: The Divergent Break (Lexington Books, 2018) and editor of The Intermarium as the Polish-Ukrainian Linchpin of Baltic-Black Sea Cooperation (Cambridge Scholars Publishing, 2019).

Teaching in an Age of Ideology: Eric Voegelin

Grace in the Garden: The Fall of Man and the British Pastoral Tradition