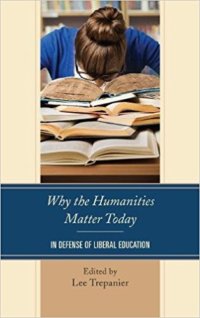 The prospect of reversing this trajectory in academic employment is not promising, as these disciplines’ self-studies have pointed out that budget cuts have eliminated faculty positions, senior scholars off-putting retirement, and university pressure to increase class size, adopt online courses, and hire part-time or adjunct instructors to reduce costs. Furthermore, an emphasis on the STEM fields (science, technology, engineering, mathematics) has not only attracted more students but also more resources from the university, government, and private sector at the expense of the humanities.[4] The attraction of STEM can partly be explained by its utilitarian appeal of employment, an undercurrent that always has existed in American society’s understanding of higher education. Other factors that have led a support to STEM are Americans becoming more self-conscious of their increasingly dependence upon technology as well as their anxiety of their nation’s perceived economic and military decline in an age of globalization.

There are several accounts of this recent loss of confidence in the humanities. For instance, the conservative critique claims that the decline of humanities is due to faculty being preoccupied with theory, particularly postmodern theory, and popular culture at the expense of mastering the content and tradition of classic works, such as the “Great Books.”[5] Instead of learning literature, philosophy, or history, students are exposed to water-down versions of leftish politics with its esoteric jargon that is neither aspiring nor attractive. The conservative critique also perceives a general moral and aesthetic decline in the standards and values of society which only makes it more difficult for the humanities to justify their value.

Coincidentally, the conservative critique of the decline and fall of society is shared by the liberals in explaining the demise of the humanities.[6] However, the barbarians at the gate are not postmodern professors and leftist political activists but economic elites and the structural problems inherent in a capitalist society. According to the liberal critique, the decline of the humanities is due to the dominance of capitalist values in society where students see professional success and well-being only in economic terms. The values of the humanities are not recognizable in such an environment and therefore are discarded.

Finally, the professional critique continues this line of reasoning from its liberal counterpart but applies it to the university itself.[7] The introduction of capitalist practices and values into academia has led to underfunded humanities departments, an overcrowded job market, and pressure to publish for job security, no matter how trivial the topic. Because the humanities are resistant to standardization, whether in administrative rule or in disciplinary analysis, they are unable to compete with those disciplines (e.g., STEM) that are suitable with capitalist practices and values. The result is the humanities are displaced from a position of prominence in the university.

In response to this loss of confidence, the humanities have presented several arguments and coping strategies about their values, although it seems that they have little influence today. The first is an appeal to the tradition or moral values of the humanities themselves: these disciplines are important intellectual endeavors in their own right and therefore should be valued and protected as such[8]. This argument also is made by those who advocate liberal education. However, this argument has little appeal except to those who already agree with it, for clearly other disciplines, such as STEM, also have their own tradition, moral values, and are considered important intellectual endeavors, in addition to providing employment and material and scientific advancement. Appeals to tradition and proclamations of moral worth are essentially religious arguments which are effective only if you happen to believe in them first.

The second and more accepted argument about the value of the humanities is that they foster skills critical to being a good human being, worker, and citizen[9]. The study of the humanities leads one to think critically, write clearly, and communicate well. Thus, it is not a surprise that courses in the humanities tend to be overrepresented in university’s general education programs because they supply students the skill set before they specialize in their subjects. But is this really the case? Surely other disciplines, like the STEM fields, can teach students how to think, write, and communicate well – it is difficult to imagine the humanities are somehow uniquely suited for this task.[10] Perhaps the STEM fields can even do it better than the humanities in teaching students these skills.[11] By relying upon the “critical skill” argument, the humanities may inevitably have accelerated their own demise in the university when other and more popular disciplines may be able to accomplish the same thing.

The third response is to change the nature of discipline itself in order to make it more relevant and attractive to students: instead of reading the novels of Jane Austen, a literature student can watch film adaptions; rather than learn Wittgenstein or Aquinas, a philosophy student can be taught the ethics of business; in place of studying World War I, a history student can learn about 1960s popular culture.[12] Although all disciplines have to evolve and change over time, the incorporation of latest trends and fashions can strike one as desperate, the seeking students at any price, and a loss of confidence about the value and relevance that used to constitute the core of one’s discipline. This change in the nature of the humanities also does not address the problem of value when compared to other disciplines. Although the humanities may now be able to attract students because of their more popular appeal, it is not clear what new or additional values they bring, especially when compared to the STEM fields.

We have invited a mixture of established and young scholars to contribute to this book to show what philosophy, literature, foreign language, history, and political theory can contribute to their own discipline’s self-understanding and their relationship to liberal education. By addressing these central questions, these contributors bring a thematic unity in the book while, at the same time, provide a pluralism of perspectives from their own discipline on these topics. Hence, the book delivers a much needed viewpoint in the current literature on the humanities and liberal education.

In “Is Philosophy Impractical? Yes and No, but that’s Precisely Why We Need It,” Kristopher G. Phillips argues for both the practicality and impracticability of studying philosophy. Phillips contends that the impracticability of studying philosophy can lead people to actually be more practical. Philosophy provides people freedom and flexibility to approach topics that in turn may have practical but at that time unknowable implications. Descartes and other early modern philosophers are examples of this where their philosophical studies did not have any discernible practical effect because they were not concerned about such matters, although these studies ultimately laid down the foundations for the more practical disciplines of modern science.

In the third chapter, “Comparative Literature: From ‘Crosswords’ to the Humanities to ‘Rhizome,’” Nozomi Irei examines the difficulties that comparative literature confronts in securing a place within English departments because of its emphasis on “theory.” To response to these challenges, Irei calls for the discipline to be more interdisciplinary and globalized in its scholarship and teaching. Drawing from the works of Nietzsche, Deleuze, and Guattari, Irei invokes the metaphor of the “rhizome” as a way for different disciplines to cooperate and re-interpret their value to themselves and the public.

The fourth chapter, “The Limits of Language as a Liberal Art and Hugo von Hofmannsthal’s ‘Letter to Lord Chandos,’” is James W. Harrison’s defense of foreign language. Studying languages is a way for people to subject themselves to the rules of grammar and syntax in order to discover how one can represent and connect with reality. But what about realities that evade expression in language? Looking at “Chandos Letter,” Harrison shows us the limits of language in revealing certain realities; and yet language is still necessary for liberal education, and for human being to study it, because it provides a framework in which they can navigate and make sense of the world in which they live.

In the next chapter, “Ancient History’s Contribution to Liberal Education,” David Lunt examines how Isocrates’ account of history is a rhetorical exercise, too. This understanding of history would be further supplemented by the rational approaches of Herodotus and Thucydides. History consequently is a rhetorical art to articulate ideas, themes, and arguments that have present value. Students of history therefore are to be trained and encouraged to think for themselves and develop arguments for current concerns by drawing upon the past.

Like all books, some things are missing. There are some disciplines in the humanities that are neglected, such as religious studies or theology, but we see this volume as a way to spark conversation about the need for the humanities in American higher education. The humanities must discover new ways to demonstrate their value to students, colleagues, administrators, and the public if it wishes to remain relevant. We hope this book is a step in that direction.

[6] Kronman, Anthony. 2008. Education’s End: Why Our Colleges and Universities Have Given up on the Meaning of Life. New Haven: Yale University Press; Roche, Mark William. 2010. Why Choose the Liberal Arts. Notre Dame: University of Notre Dame; Nussbaum, Martha. 2012. Not for Profit: Why Democracy Needs the Humanities. Princeton: Princeton University Press.

[11] Some scholars have argued that the humanities follow too closely the natural sciences and therefore lose what is unique to their disciplines. Bod, Rens. 2013. A New History of the Humanities. Oxford: Oxford University Press; Bod, Rens and Julia Kursell. 2015. “Introduction: The Humanities and the Sciences.” The History of Science Society. 106: 337-40.

[13] Perhaps the best example of the public not seeing value in the humanities is the holiday ritual of The New York Times to run a mockery article about the topics presented at the annual convention of the Modern Language Association.

This is from Why the Humanities Matter: In Defense of Liberal Education. Also available is Kirk Fitzpatrick’s “The Third Era of Education” and Lee Trepanier’s “The Relevance of Political Philosophy and Political Science.” Our review of the book is available here.

Voegelin and the Scandal of Luther: Philosophy, Faith, and the Modern Age

Heidegger and Kierkegaard: Conception of Aesthetics and Art