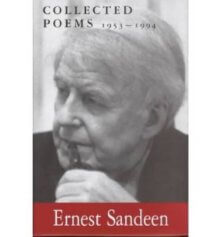 Ernest Emmanuel Sandeen wrote a half dozen or so volumes of poetry in his long life.  He earned his first fame with this very poem, “Parked Car,” which was published in The New Yorker in 1938.  I looked it up and realized that although he was rather young, his work was appearing alongside such luminaries as S.J. Perlman, Ogden Nash, and Wolcott Gibbs—that was in the late ’30’s when the life of the arts was the best life and much of it flowed through that essential magazine.

At Notre Dame In 1960 I took a course in Chaucer from Professor Sandeen but was then unaware he was a poet (like most poets he had to earn a living doing something else).  Subsequent courses included Old and Middle English literature and modern British poetry.  Eventually he offered me a job correcting exams, etc., and not too long ago I found my copy of Children and Older Strangers and on the titlepage there is this inked inscription:

In gratitude for our happy associations

and with warmest regards,

I suppose I was not very appreciative at the time.  Perhaps I thought some professors’ openness and generosity meant I belonged in their company.  I knew “Ernie” (Only the faculty called him that!) when he was in his early fifties. He was a rugged looking man with a bulldog square face and a brush top haircut that belied his gentleness.

Twenty five years later I made an oil painting called “The Parked Car.” There was no conscious connection because I had forgotten his poem by then.

The poem is certainly superb; the last four lines are a perfect combination of original imagery, profundity and economy.  The poem more or less summarizes much of my own youth in a way that nothing else approaches.  Let us just say that if I wouldn’t talk about my teen years I could at least point to this poem.

Today there is a biennial Ernest Sandeen Prize for Poetry, awarded to a poet who has also published at least one previous volume of poems.  In fact a search for his name on the Web mostly produces pictures and biographies and collections from the winners of the prize named for him.

Truth as a Democratic Project