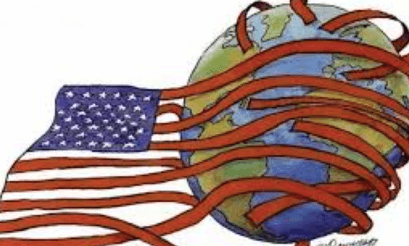 Writing recently in Spectator USA, the estimable Dan McCarthy pointed out that the recent failures of American foreign policy are not simply errors in prudential judgment.[*] There is something deeper bubbling underneath American culture that led our elites to launch misguided military crusades to promote democracy in the Middle East and to engage in other imperial adventures. As McCarthy wrote: “Our foreign policy does need new thinking—but that thinking must go much deeper than foreign policy.”

If one wishes to understand how imperial ambitions can be fueled by a certain kind of cultural imagination, one needs to look no further than Napoleon. How did the nation that produced Descartes, Voltaire, Diderot, and other legends of Enlightenment “reason” come to be ruled by an obscure artillery officer with an undistinguished education? Napoleon himself had a ready answer: “Yes, imagination rules the world. The defect of our modern institutions is that they do not speak to the imagination.” Successful political leaders rule not from cold reason or through appeals to reasonable policies, but by stirring the imagination.

The evidence that American foreign policy is not guided by reason is overwhelming. Trillions of dollars have been spent on unending wars that have caused countless deaths based upon idealistic dreaming. After our overthrow of the Iraqi dictator unleashed a hell storm on the people of Iraq, we adopted the identical strategy toward dictators in Libya and Syria. Our foreign policy elites display a bizarre obsession with Russia, a weak power that is being ruled, not by a totalitarian monster, but by an authoritarian dictator resembling the czars and who is restoring Russia’s great Orthodox tradition. And, despite China’s role starting a global pandemic and its reeducation camps, many members of America’s elites retain a decades-long sycophancy towards a genuinely totalitarian regime. These errors are failures of imagination, not reason.

This is not because they have low IQs or are lacking information but because their imaginations are stirred by a desire for a global American hegemony, of a glorious imperium in which they set the world’s rules. The imaginative appeal of imperial rule has been one of the most powerful motivators in all of human history, from ancient Rome to Great Britain, the Third Reich, and the Soviet Union. A fundamental obstacle to a more sensible foreign policy is that it is nearly impossible to argue American elites out of their views on foreign policy, no matter how much evidence one can assemble proving that our strategies have had a terrible cost.

The great political philosopher Eric Voegelin once wrote an essay titled: “On Readiness to Rational Discussion.” In that piece, he argued that it is of course very valuable to have the freedom to discuss various things, but for progress to occur, the interlocutors must have a readiness to discuss. And, those who have been infected with ideology, with a polluted imagination, will not be open or eager to engage in rational discussion.

Voegelin cited certain tactics used by ideologues to avoid genuine discussion. One of those tactics he called “classification.” “The speaker evades the point at issue by asserting that his opponent’s argument can be classified as being the result of a definite ‘position’. . . the ‘position attributed to it is always selected with pejorative intent.”

The foreign policy establishment employs this tactic of classification regularly and with relish. Those who criticize America’s tragic imperial overreach are classified as “isolationists,” and those employing this label assume that their opponent’s argument has been destroyed by this classification. Or, realist thinkers who argue that power may well be the operative unit of analysis in world affairs are classified by idealistic dreamers as immoral “Machiavellians.” Or consider Tulsi Gabbard’s sensible, yet unconventional, foreign policy views. The Atlantic did not host a symposium to consider the pros and cons of her positions. No, the establishment simply classified this combat veteran as a “Russian asset” and moved on. The use of this classification tactic, Voegelin pointed out, is a sure sign of an unwillingness to engage in a genuine discussion, and this unwillingness makes real progress impossible.

Dan McCarthy is right: the problem goes deeper than an error in judgment by our elites in selecting the “wrong” grand strategy. American foreign policy has gone off the rails because there is something in American culture that has gone off the rails. American culture and education, for example, have the effect of detaching young people from reality, to alienate them from their traditions, and to inform them that character and virtue are not related to personal behavior but are bound up with sympathy for “humanitarian” causes. The older classical and Christian tradition instructed us to reform ourselves, to find the “golden mean” in our own behavior or to conform our own will to God’s will. The new morality instructs us to reform not ourselves, but the world. The embrace of this sentimental humanitarianism is nowhere more evident than in foreign policy.

As Irving Babbitt pointed out, the two most powerful social movements of the last three hundred years have been scientific and sentimental humanitarianism. These movements have not tended to exert a check upon leaders with imperial ambitions, but to flatter and arouse them. The ambition of scientific humanitarianism is to exert power over nature, and the ambition of sentimental humanitarianism is to exert power over other people. Humanitarianism is simply indistinguishable from imperialism. As Babbitt wrote: “The humanitarian would, of course, have us meddle in foreign affairs as part of his program of world service. Unfortunately, it is more difficult than he supposes to engage in such a program without getting involved in a program of world empire.”

When people raised in our current cultural milieu hear that America is on a crusade to democratize the Middle East or that we are unleashing the power of the American military to bring human rights to all the world, they are not appalled at the staggering impracticality of such a scheme or the brutality it would require. They do not raise the obvious cultural objection that republican government arose in America due to important religious and other historical factors and that it cannot be exported like cheese. Instead, the dreamy imaginations of our elites are stirred by the idea of reforming the whole world, and their eyes well up with tears of joy for all the Arabs who will soon be experiencing “freedom and democracy.” The raw power of the American military is put into service of this dream.

When people are living in such dream worlds, it is quite difficult to argue them out of them. The errors of American foreign policy in recent decades have deep cultural and, dare I say, spiritual roots. We have embraced what Irving Babbitt called a “sham spirituality” that equates virtue with sympathy for “idealistic” causes. This has made American foreign policy both unwise and intractable.

Many activist conservatives and libertarians believe that the solution to this errant foreign policy is simply to crank out more policy papers, establish more think tanks, and pen more editorials and opinion pieces. With reason and discussion, we can chart a more reasonable course for American foreign policy.

While one should always welcome sensible policy ideas and transmit them to policy makers, the evidence that relying solely on this strategy of persuasion will alter the course of American foreign policy is quite thin. Proponents of American hegemony simply do not wish to be persuaded by facts and arguments. The unending evidence of the tragedies they have caused are all around them, yet they do not reconsider. They make the same mistakes over and over.

The only remedy is of course to go upstream from policy solutions and to address the deeper, primordial motivations of human behavior. Only through a cultural and educational renovation can future leaders be taught that temperance, self-restraint, and moderation are the proper American virtues. The desire for hegemony derives from intemperance, ambition, and immoderation.

The problem of American foreign policy is the eternal problem of humanity. As Babbitt said, it is the problem of how to exert “a power of control over impulse and desire.” The task of renovation is a difficult but necessary one. It involves a struggle that has always been apparent within each of us: the effort to master our passions so we do not desire to dominate others.

This was originally published with the same title in The Imaginative Conservative on May 26, 2020.

William S. Smith is Research Fellow and Managing Director at the Center for the Study of Statesmanship at The Catholic University of America. His recent book is Democracy and Imperialism (University of Michigan Press, 2019).