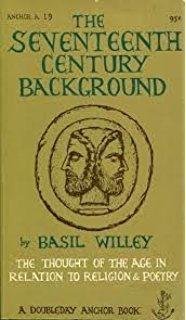 .  . . the changes of this modern climate ever since the seventeenth century have become the subject of Basil Willey’s perceptive and extensive Background studies, beginning in 1934.

Who was Basil Willey, what were his Background studies, how good were they, and how, beyond pietas ad mortuos, can we profit by them?

Basil Willey was born in London in 1897. After surviving the First World War as an infantry officer, he took a first in history at Cambridge and the next year a first in English. He rose through the academic ranks until he succeeded Sir Arthur Quiller-Couch as the King Edward VII Professor of English Literature at Cambridge, a position for which he beat out C.S. Lewis.

From there, he rolled on steadily, gathering honour and adding titles to his name until he retired in 1965.

The Background studies in question are the best known of his many books. They include:

The Seventeenth-Century Background: Studies in the Thought of the Age in Relation to Poetry and Religion (1939).

The Eighteenth-Century Background: Studies in the Idea of Nature in the Thought of the Period (1940).

This is lot of material, and in these remarks we will limit ourselves to the volume on the 17th century. This will give us a reliable taste – Willey was as consistent as good cheese.

There is Penguin Peregrine edition of The Seventeenth Century Background on our desk, and according to the dust jacket photo, Professor Willey was a dead-ringer for the late Basil Rathbone.

His authorial voice often reminds one of Sherlock Holmes.

Hobbes belongs to that class of thinkers, usual in periods of rapid scientific advancement, to whom a ‘naturalistic’ type of explanation seems completely satisfying. (p. 91)

Bacon’s great service to ‘science’ was that he gave it an incomparable advertisement, by associating with it his personal prestige, his ‘Elizabethan’ glamour and his great literary power. The feeling of ‘rightness’ with which English and other scientists proceeded in succeeding centuries must have been due, in part, to his persuasiveness. (p.31)

However, leaving aside that issue and the question of whether such a tone is an accident, or a property, or even part of the essence, let us look at the book itself. Willey arranges his material into twelve chapters, beginning with “The Rejection of Scholasticism,” and ending with “Wordsworth and the Locke Tradition,” and touching upon, among others, Sir Thomas Browne, Descartes, Hobbes, and Joseph Glanville. There is a crew fit for the Walrus.

That is the structure. The timber is the set of intellectual notions available to English writers and thinkers over the 1600s and the changes in this set. The book’s theme, its utrum sit, is the steady erosion and corrosion of the mythological element in literature under the influence of a materialistic or “scientific” attitude. Voegelin might have called it the loss of spiritual substance, and it is no wonder he took note. We might also paraphrase the point by saying that the transcendent, that sense of personality behind the mask of phenomena, was leaking out of the universe.

This presented writers of that period with two problems.

First, the overwhelming bulk of the English population remained conservatively religious, attached to the mythological element in religion (like Christmas and miracles), and were sometimes even pious. The official church operated on these principles.

The elite, on the other hand, at least the advanced, progressive, scientific elite – all those who would have subscribed to the New York Review of Books, had it existed – were on an express track to atheism.

What if the servants found out? What if they adopted scientific, progressive attitudes?

So, one had to keep up appearances. The question was how to save as much of Christianity as the elite could stomach.

Second, it became clear, bit by bit, that human beings, alas, needed, wanted, some spiritual substance. Science was handy, but as a day-to-day philosophy, materialism was thin soup. If traditional religion was, well, icky, a substitute had to be found. The old drug no longer worked, but the effects were still desired.

The theater in which this struggle went on was literature, especially poetry. Could poetry be maintained without transcendence? How could the poetic “charge” be kept under a materialist logic? The answer was romanticism, which offered pathos uncut with reason.

These questions would naturally interest Eric Voegelin. And these questions have, in fact, never been solved. At the end of Victorian era the same problem arose, and the kulturkampf goes on to this day.

So the issues the book addresses are alive.

Is Professor Willey’s analysis worth our attention? Is The Seventeenth Century Background a good book? Is it worth $7.00 hardcover or $2.86 paperback (plus shipping)?

The first thing to note is that Professor Willey knows his material. He really, really, knows the texts, all of them, clear through.

Second, in spite of a de haut en bas style, he gets his points across in order and with dead clarity. No seven sorts of ambiguity here.

Third, as a man from the old school, he has the virtues of material that is not up-to-date, and is, to that degree, liberating.

Fourth, by and large, he seems to be right in his thesis. Not up-to-date or fashionable. Just correct.

Which is not a small thing.

The book, in fact, has so much good in it that one wishes it were better.

What interests Professor Willey is narrow and then some. A lot more was going on in the 1600s than he mentions. He ignores Asia, Africa, and America, Europe, except for few side remarks, and 98% of the English people. Did not they have an occasional thought?

It may be objected that the aim of the book is not global currents of thought, but the intellectual background to literature, specifically English literature.

Fine. Were all these excellent fellows, Descartes and so on, living on the moon? Did none of them notice what was going on? μη γενοιτο!

This was a century of climatic change and civil wars, the century when the Atlantic slave trade blossomed, a century of global crisis, when, according to Geoffrey Parker, author of Global Crisis: War, Climate Change and Catastrophe in the Seventeenth Century, a third of the human race perished.

In blithely ignoring the planet beyond “his crowd,” Professor Willey does not speak untruth, but he makes his range narrower than perhaps it could have been, and he strikes more shallowly than he could have.

Yet having written this, caution strikes back. The book is as he wanted it, not as we might imagine it. And Professor Willey, and his audience, in 1939, had certainly seen enough of lacrimae rerum to know how the world works. Can we censor them for wanting something entertaining, edifying, and untragic?

It is a very sound book, therefore, but not a masterpiece. But that is no great fault. Not every book has to be the Republic. We can salute Professor Willey and second Voegelin’s judgement, at least as far as the seventeenth century, without asking for a heroic effort. Not every author has to point at the stands before he bats.

Marcus Aurelius and The Dying Wisdom of the Gladiator