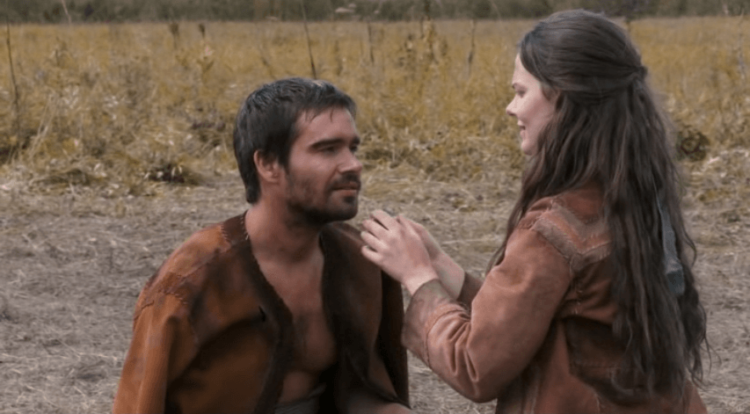 The year is 1907. Revolutionary fervor sweeps Russia, and the most common punishment for political subversives and revolutionaries is exile to Siberia. Those who try to escape their exile and return are hunted down by Cossacks. Their ears are cut off and traded for bounties. The first feature film by the recent genre-film director Rustam Mosafir, the 2014 joint Kazakhstani-Russian production Begletsy (or Fugitives), follows the story of one of these revolutionaries as he tries to escape from Cossack bounty hunters.

Begletsy is, essentially, an Ostern. We may even call it, with perhaps a bit of irony given the revisionist nature of the Ostern genre itself, a “revisionist Ostern.” For the most part, it’s played straight – but the “revisionist” marks on it are made clear throughout. Mosafir calls us to a reflective self-criticality. There are elements in it of a tale of sin, suffering, redemption. There are also questions the film raises for us about the nature of wealth, our desire for this-worldly freedom and security, and the agonistic relationship of both to our religious strivings. It is also, much like Kelin or Shal, a survival film. But it is obvious that the vision of the film is a Russian one, albeit a Russian one that “faces east.”

Pavel (Pyotr Fedorov) is part of a group of escaped prisoners that are being hunted by a band of Cossacks led by the cruel and cynical Kudim (Sergei Tsepov). Kudim and his men manage to kill all of them except Pavel, who escapes by jumping into a raging river and swimming to the other side. However, Pavel is the one they’re really after since, as a political prisoner, his bounty is largest. The escapee takes shelter with a prospector, Vasilii (Valerii Grishko) and his mute, illiterate wife Ustya (Elizaveta Boyarskaya). Vasilii’s father, whom Pavel comes across as he is dying, informs Pavel of a cache of gold hidden in a pit he dug outside, and asks him to help Vasilii retrieve it. They recover the cache, but Vasilii is killed by the Cossacks after they discover he is sheltering Pavel. After that, a three-way game of cat-and-mouse ensues in the wooded taiga between Pavel and Ustya, the Cossacks, and an enraged bear which is trying to find her lost cub. Pavel winds up shot and falls into a bear trap; after that he has to be taken into an Evenki shirangju to be healed.

The Evenki hunter (Seidulla Moldahanov) who heals Pavel is actually also the one who introduces the story. He reflects on the strange ways of the white man – who hunts for gold and then tries to speak to God, thinking that God will hear him and heal him. In so doing, he sets in play the central dilemma of both Vasilii and the Cossacks – as well as Pavel, to some extent. To what extent is chasing wealth, or ease, or security, worth giving up parts of your own soul? The film demonstrates to us, intriguingly enough, that even hateful blackguards like Kudim and his henchman Skandyba, after all, have souls and desire union with God. They have just mired themselves in such a mad scramble for gold such that they cannot hear or rightly speak to God. Pavel, too, doesn’t seem to be going about “healing his soul” in the right way. We get glimpses – both in his own flashbacks and during the Spirit Dance of the Evenki hunter – that he feels a certain degree of remorse for his assassination attempt that clearly went awry. But by the end of the film he doesn’t seem to have dealt with that, and the Evenk says as much. What is truly intriguing to me, though, is that, despite the Cossacks crossing themselves and praying to Christ and despite Ustya chasing after her lost baptismal cross, Mosafir puts the religious, Orthodox perspective on these questions into the mouth of a shamanistic Evenki hunter! There is no question but that this was a deliberate choice on his part – hence my application of the term “revisionist.”

As a meditation on the conflict between wealth and religion and the tension between a desire for a secure life and a desire for God, the film doesn’t quite work. The moments where it comes closest are the moments of tension among the Cossacks when they start to betray each other over the bounty. But for the two main characters, it doesn’t quite work. Ustya is too simple in the positive Russian sense, and Pavel, despite his chequered past – too altruistic. It is probably best to think about Begletsy more as a survival film from their perspective.

The acting in this film is remarkably decent. Petr Fedorov’s acting gives us certain shades of a young Michael Biehn; he has a similar resilience combined with physical and emotional vulnerability. He’s a “fish out of water” when it comes to the taiga, but also clearly not wholly helpless. Elizaveta Boyarskaya really carries the day here, though. By turns wild and demure, domestic and tough, despite her character having literally zero dialogue, she manages to convey a particularly redoubtable emotional subtlety and range, in addition to being easy on the eyes even when covered in blood and grime. Little wonder indeed that the relationship between Pavel and Ustya takes the turn that it does. On the other side, the Cossacks are a delightfully well-done motley crew, from the unprincipled Skandyba (Aleksandr Samoilov) to the reluctantly-conscientious Ignat (Juris Lauciņš) and the naïve and cowardly Mihei (Kirill Anisimov). They are also shown to be expert bounty hunters and survivalists, which keeps the stakes high and allows Mostafir to build up some excellent dramatic tension.

The film is, by the way, incredibly well-paced, and holds the viewer’s interest throughout. The one thing about Begletsy I wasn’t too appreciative of was the soundtrack. Maybe it’s just because I’m coming off watching some minimalist art films with fairly sparse soundtracks that I’m saying this, and so my opinion here ought to be taken with a grain of salt. Even so, I found the soundtrack too bombastic and ostentatious for a film like this. I’m not saying we necessarily have to have another Shostakovich doing the score, but the big dramatic swells or the tense musical passages that accompany various beats of the plot do seem a bit much. It seems to me that less, and more judicious, here could have meant more.

The cinematography dwells lovingly on the rural taiga. (In the humble opinion of yours truly, it’s prohibitively hard to make an ugly movie in Kazakhstan. Cameras are attracted to the Kazakhstani landscape like magnets.) We have some nice atmospheric shots of mountainscapes and forests, some animal photography of eagles and especially bears. And it was clear they used live brown bears for most of the takes rather than animatronics or puppetry, but that also meant some awkward takes and edits for the action scenes where the bears were involved.

Overall, Begletsy is a fun, enjoyable movie with some typical Ostern flourishes. Even though (as he seems to intimate from his interviews) this wasn’t quite the movie that Mosafir wanted to make for his debut, it’s still a strong start to a career.

Apparitions of the Gods: A Voegelinian Meditation

Did You Ever Wonder What the World Would be Like without You in It? An Introduction

On Behalf of Ignorance: Stefan George