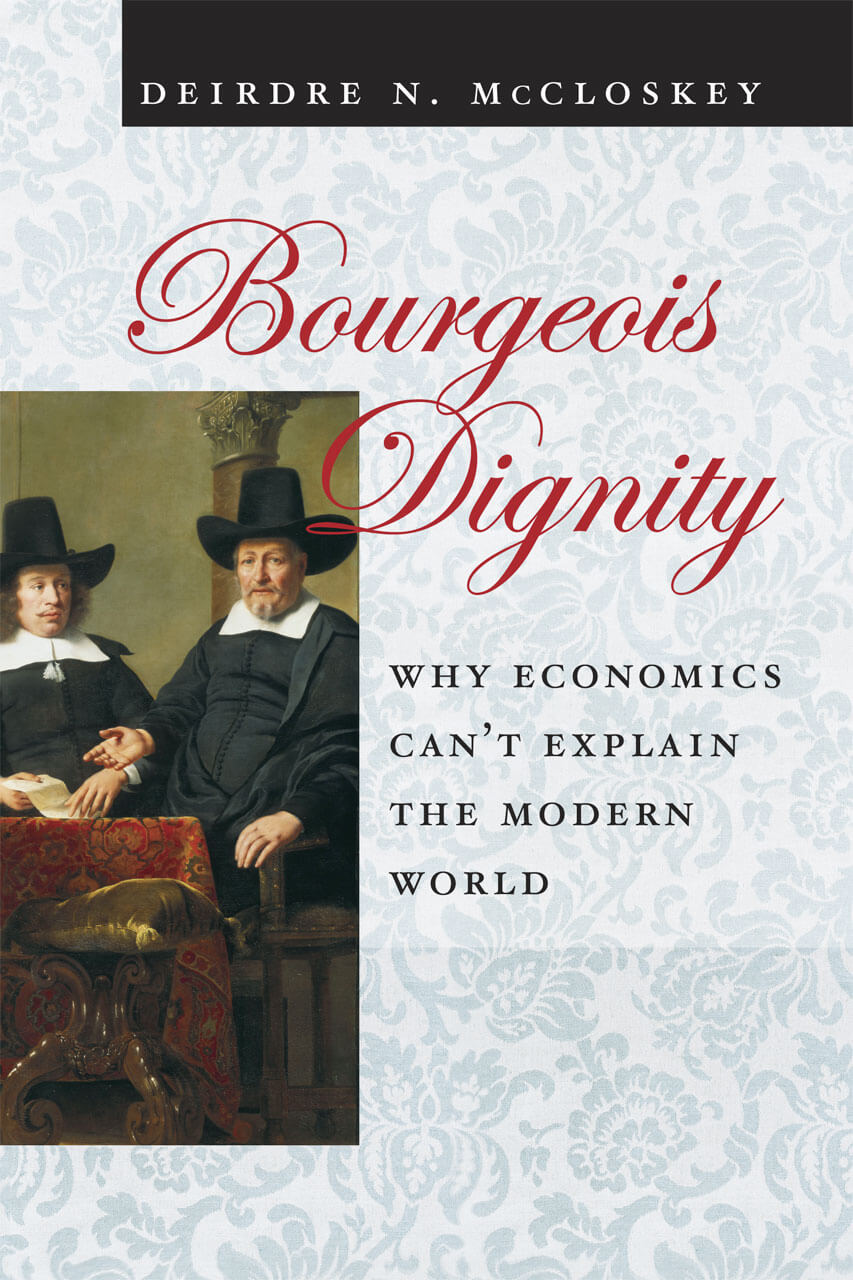 According to McCloskey, a change in the common opinion about markets and innovation during the seventeenth and eighteenth centuries in Holland, Great Britain, France, and the United States caused the Industrial Revolution and, in turn, ushered in the modern world. For McCloskey, ideas, particularly the rhetoric of ideas, is the driving force of economic improvement with bourgeoise dignity and liberty playing key roles.

For McCloskey, dignity is being accorded the respectful opinions of others while liberty is concerned about freedom in behavior permitted by law. These two ideas led to innovation and the acceptance of the free market among the populace of northwestern Europe. The bourgeoise were reevaluated as the class that not only made themselves rich but also increased the welfare of the poor. It would not be until the late nineteenth century, when the bourgeoise were firmly entrenched in western political, economic, and cultural life, that artists and intellectuals began to criticize the bourgeoise and their virtues.

McCloskey provides a number of studies to show that economic betterment did occur, contrary to claims of Marxists and other critics, because of bourgeoise ideas, like dignity and liberty, led to innovation and productivity. For instance, the real costs of cotton textiles was halved by the end of the eighteenth century and again twice more by 1860 because of innovation in organization and machinery. Other textiles imitated the innovations in cotton and significantly cheapen their products, thereby benefiting everyone.

For McCloskey, innovation, not the sheer pilling of productive investment, is what drives economic growth. In a series of chapters, he refutes theories that capital, the Protestant work ethic, Neo-Darwinism, science, expropriation, institutions, geography, transport, foreign trade, imperialism, and other factors caused capitalism. It was bourgeois dignity and liberty within the context of the Enlightenment that made capitalism flourish. Bourgeoise society was pragmatic and nonutopian and its ideas in rhetorical form made innovation respectable, especially among non-aristocratic countries like the United States.

However, the economic lead that was once Britain’s and later Europe’s and America’s is only temporary as followers could leap over stages in economic development and surpass the West, whether China or India. As McCloskey writes, the biggest economic story of our time is not the Great Recession – or even COVID now – but how China in 1978 and India in 1991 began to assign dignity and liberty to the bourgeoisie. Learning from the West, these countries can leapfrog over the West into the future of economic development and material betterment.

Bourgeois Dignity is a contrarian account of economic development that addresses and disarms its opponents. While not every reader may be persuaded of his thesis that ideas drive history, McCloskey provides a useful correction to those who rely upon materialist reductive explanations to account for a complex phenomenon. For those who wish to know about how the West had economically developed and how the East may soon be, Bourgeois Dignity is the book to read.

In My Mother’s House: A Daughter’s Story
Cosmopolitan Political Thought: Method, Practice, Discipline
In Pursuit of Civility: Manners and Civilization in Early Modern England
A Companion to Joachim of Fiore