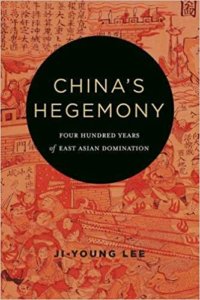 In spite of its status as the sole great power of East Asia, China suffered a series of setbacks during the fourteenth to seventeenth centuries: Korea, a tributary of the Ming Empire (1368-1644) since 1370, sent its military against the Ming; Japan invaded Korea in attempt to conquer China; Korea supported the Qing during China’s transition from the Ming to Qing (1644-1912) Empires; and Japan later created a self-proclaimed tributary order centered on itself, treating Qing tributaries like Korea as its own. During this period, these less powerful East Asian state challenged and defied China as the sole superpower of the region. Why?

China’s Hegemony: Four Hundred Years of East Asian Domination answers this question by arguing that Chinese hegemony was accepted by its neighbors because it provided political legitimation in domestic power struggles. To understand the nature of Chinese hegemony, one must look at the ways political leaders of China’s neighbors manipulated external recognition from China in the form of symbolic politics to enhance their legitimacy at home. This perspective runs contrary to the (western) conventional understanding of the tribute system: the tribute system was an imperial tool to project Chinese culture and power onto other East Asian states. Instead, Lee argues that the Chinese tribute system was shaped to a significant degree that it was accepted, ignored, and challenged by China’s neighbors. The key to understand the tribute system lies in examining why some states complied and others did not at various times.

Lee selects Korea’s and Japan’s relationships with China that represent the full continuum of compliance, defiance, and challenge to Chinese authority. Korea usually complied with Chinese hegemony because of its geographical proximity and relatively weakness when compared to China but also Korean leaders needed to legitimatize their rule through reference to Chinese symbolic authorization. In contrast, Japanese leaders needed to legitimatize their rule through their own imperial institutions and symbolic authorization and could hurt their legitimacy by identifying with the Chinese ones. Thus, Japan defied and challenged Chinese hegemony not only because it was distant from Chinese power but, more importantly, for domestic political reasons to remain in power.

The book consists of five chapters with an introduction and conclusion. The introduction situates Lee’s argument in the international relation’s literature of Chinese hegemony in early modern East Asia and emphasizes the importance of domestic politics to understand the varying degrees of receptivity to Chinese hegemony. It also provides a brief illustration of the Chinese hegemonic order under the Ming and Qing Empires, showing that its hegemony rested upon symbolic domination where weaker states gave gifts to China and China in return bestowed titles, official recognition of their authority, on the givers. Chinese hegemonic power therefore should not be understood as the extent that China could get a neighboring state to do something; rather, it should be seen as making some activities permissible while ruling others out of order.

The first chapter, “Understanding the Tribute System,” reviews the six school of thoughts of how to understand the tribute system – the Fairbankian model of Sinocentric hierarchy, the New Qing perspective, the transnational economic history school, China’s borderland studies perspective, the investiture model, and the tianxia system (“all under heaven”) – and examines the evidence of the official reports and personal essays written by Korean and Chinese envoys about their tributary missions. The sending and receiving of envoys, the exchange of gifts, and the receiving and granting of titles reveal that, instead of the six-above mentioned theories, a “practice-oriented approach” should be used to understand the tribute system. The tribute practices structures how actors conducted their relations with China and with each other. Also being a reservoir of Confucian cultural hierarchical authority, it also determined what was socially acceptable behavior in the conduct of diplomacy.

Chapter two, “Chinese Hegemonic Authority,” reviews how the international relation’s literature thinks of hegemony and why its practitioners need to take into account domestic political needs when theorizing about the tribute system. Lee develops the domestic legitimation argument by explaining that hegemony needs to be understood in a sociological manner to understand the role of less powerful states. Furthermore, scholars should focus on the connection between legitimatization and hegemony and how domestic politics is linked to the variations in the way states comply with hegemony.

In this chapter, Lee defines her terms: challenge is a direct military challenge to China; defiance is a refusal to follow Chinese “rules of the game” in tributary practice; compliance is to have official tributary relations with China and abide by its rules and practices. Korea complied with the tribute system during Ming and Qing Empires and during the Imjin War (1592-98), while Japan tentatively compiled during the Ming Empire, challenged it during the Imjin War, and defied Qing hegemony. This variation between these two countries raises question about the realist’s theory of power politics to explain international politics and gives credence to Lee’s domestic legitimation approach.

Understanding how the Ming hegemony worked is the focus of chapter three. When a neighboring state did not comply with the Ming Empire, it withheld recognition of a newly enthroned leader, ignored defiance happened, or sent the military to enforce its demands. Lee shows how the domestic need for legitimatization led the new ruler in Korea, Taejo, who founded Joseon dynasty (1392-1897), to comply with Ming tributary practices as well as for Yoshimitsu (1358-1408) who was building a new political order for Muromachi Japan (1336-1573).

The next period, the Imjin War, is examined in chapter four. The war marks Japan’s outright challenge to Chinese hegemony by mustering the largest military force known to the contemporary world at that time to invade Korea. Hideyoshi (1537-98) desire to unify his nation and build a Japanocentric world order was the motivation for starting the war. The invasion of Japan was not simply to challenge Chinese military power but to challenge the symbolic authority of the Ming Empire itself in order to enhance Hideyoshi’s domestic authority over his rivals. In contrast, the Korean King Seonjo (1522-1608) highly complied with the Ming hegemony but less so for appreciation for the Ming’s military assistance in expelling the Japanese from the Korean peninsula rather than to compensate for his debilitated legitimacy due to his failure in the war.

The collapse of the Ming Empire and the beginning of the Qing one is the subject of chapter five. The Qing enjoyed less authority than the Ming in the tribute system: it had to invade Korea twice in order for it to become a tributary state and Japan ignored its authority entirely, forming its self-proclaimed miniature tributary system. Because the Manchus were considered barbarians by the Han Chinese, Koreans, Japanese, and other East Asians, their rule was seen as violating the boundaries and norms of diplomatic practice. As Lee shows, both the Koreans and the Japanese used this perceived cultural inferiority of the Qing Empire to their own domestic political advantage. Korea continued to support a declining Ming against the growing Machu threat because the new king needed legitimacy from the Ming Empire to cement his rule, while Tokugawa Japan (1603-1868) claimed itself the new center of East Asian politics to unify the country and enhance its own domestic legitimacy.

China’s Hegemony is especially critical today with the current rise of China. In 2010 China surpassed Japan to be the world’s second largest economy, has increased its military spending the past two decades, and has flouted American-established international norms and behaviors. To understand China, we must not only account for the relationship between the United States and China but also examine Chinese notions of legitimacy and how Chinese leaders challenge, defy, and comply with the international system for its own domestic political purposes of legitimatizing the Chinese Communist Party.

China’s Hegemony shows that we need not only western-informed theories of international relations but Asian-aspired accounts of how these states understood themselves. Lee’s book accomplishes this task, showing the limits of western theory and possible alternatives that exist and need further exploration. If we are to understand Asia, and particularly China, China’s Hegemony is one of the first book that western leaders, scholars, and analysts should consult.

The Public Intellectual: Between Philosophy and Politics

Review of Cowboy Politics: Myths and Discourses in Popular Westerns form The Virginian to Unforgiven and Deadwood

Understanding Love and Marriage with Rousseau

Pierre Manent: The Past, Present, and Future of Political Life in the West