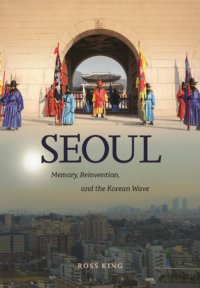 Seoul: Memory, Reinvention, and the Korean Wave examines the history of the South Korean capital by combing the perspectives of architecture and historiography. It traces the history of the city from the Japanese colonization to today with a look at how the city continually reinvents itself as it faces new and different challenges. With photographs and diagrams to illustrate its points, Seoul: Memory, Reinvention, and the Korean Wave provides an account about Seoul that is both rewarding as it is enriching.

The book itself is organized in a pair of dialectical relationships that runs throughout it: on the one hand, destruction and creativity, and, on the other hand, the local and global (or what King calls “hyperspatial”). The first, destruction and creativity, is akin to Schumpeter’s idea of “creative destruction” where disruption and erasure sets the conditions for an explosion of creativity and invention. The second, the local and the global, is where the local character of a city is expunged by the global flow of capital, information, and ideas where it becomes post-urban and post-national.

This set of relationships unfolds in four interlinked themes in the book: 1) ancient Seoul which was conquered and distorted during the Japanese colonialization and Korean War but whose memory continues to haunt its citizens today; 2) the reimagination of the city, and the nation, after the Korean War and its later success of economic modernization; 3) how to understand the city today with reference to its past that has been obliterated by war, colonization, and modernization; and 4) how to understand the city of the future with its digital contents, cyberpolitics, and Hallyu (the Korean Wave).

Chapter one, “Contested Memory,” reviews the contested historiography of Korea and how memory is sanctioned, distorted, and forgotten by various parties for multiple purposes. The first section looks at the debates of how to interpret the 1910-45 Japanese colonization of Korea: failed tradition versus advances of modernity, nationalism versus foreign domination, collaborationists versus resistant fighters, colonial exploitation versus Korean modernization. These themes emerge at different times in Korea’s history depending upon who was in power and what they wanted to project at that time. The second section briefly discusses how memory is socially produced, while the third and fourth sections lay out the themes that will be discussed in the rest of the book.

Chapter two, “Erasure and Reinvention: Korea to 1945,” analyzes the history of Korea from 2333 BC to 1945 AD. Of architectural significance was the construction of the royal palace Gyeongbokgung which was based on the geomancy principle of pungsu (the theory of negative-positive, or yin-yang in Chinese) and the neo-Confucian principle of finding the proper place for the guardian shrines of the state. The palace was built north of the city but under the south slope of the north mountain, with the royal ancestral temple east of the palace and shrine to the guardian spirits to the west. Because it was built according to these principles, the palace was seen as a “natural city” – nature and spirit reigned together in harmony – and Taejo’s rule, who founded the Goryeo dynasty (918-1382), was viewed as legitimate.

Although the it failed in its first attempt to conquer Korea in the Imjin War (1592-98), Japan was successful in its second try, beginning informally in the Japan-Korea Treaty of 1876 and formally in the treaties of 1905 and 1910. The Gyeongbokgung Palace was destroyed in 1592 but was rebuilt in 1867 until it was destroyed again by the Japanese in 1910. In 1926 the Japanese Government-General headquarters building was built on the site where Gyeongbokgung once stood. This building violated the cardinal principles of Korean architecture: harmony with the natural setting, simplicity and plainness, moderate and elegant lines, and human scale. As one scholar puts it:

“Among reasons for the Japanese to build the colonial government building in front of Kyõngbokkung [sic] was a theory that they wanted to crush the national spirit of the Korean people by interfering with the geomantic layout of the Choõson [sic] capital, which was centered around the palace. By blocking powerful natural forces which emanate from the palace site located between Mts. Pugaksan and Namsan, the Japanese hoped to make Korea their eternal servant” (quoted on p. 59).

Chapter three, “Re-Imag(in)ing the Nation: Seoul and Park Chung-Hee,” traces the history of Korea from 1945 to the 1997-78 Asian financial crisis. The defeat of Japan in World War II saw the partitioning of Korean into North and South with each side claiming Korean authenticity. In 1948 the United States installed Syngman Rhee as president of South Korea and two years later the Korean War broke out, ending with an armistice in 1953. Interesting the Japanese Government-General building continued to be used but this time by the American military (1945-48) and the South Korean government (1948-50) until it was set on fire by North Korean forces in 1950, being left unused until it was demolished in 1995-96.

The installation of Major General Park Chung-hee in a 1961 coup was the start of the “Miracle on the Han” when the South Korean economy modernized. What was forgotten during this period was Park had served in the Japanese colonialist army, maintained close contact with Japan, and modeled the Korean economic miracle after the Japanese one. During his dictatorship, Park committed sizable resources to cultural programs that exceeded most developed countries to legitimatize his rule. The state promoted King Sejong, who designed the Korean alphabet in the mid-fifteenth century, and invested in repairing historical remains associated with earlier Japanese invasions, such as the statue of Admiral Yi Sun-sin (1545-98) in 1967.

Park was assassinated in 1979 and was succeeded by General Chun Doo-hawn. Students protested against the regime, most notably in 1980 in Gwangju and 1987 in Seoul, with the government succumbing to the demands for a transition to democracy in 1987. New buildings were constructed, and ancient ones rebuilt: a new presidential office was built in accordance with geomancy principles in 1991 and the rebuilding of Gyeongbokgung Palace started in 1995 after the demolition of the Japanese Government-General building. Mixed-used housing skyscrapers also were rapidly built to house the massive population of Seoul, making the city appear like rows of nondescript boxes from the air.

Chapter four, “Erasure as Heritage: Reading Seoul,” examines how present Seoul is experienced as disaggregated places. It briefly discusses how images and ideas intersect in urban space and then views Seoul as a multiplicity of fragmented places, each distinct visually and functionally. It spends a great deal of time analyzing Jongno’s back streets; Insadong’s traditional alleys; the markets of Namdaemun, Myeong-dong, and Dongdaemun; the Cheonggycheon stream; the neighborhoods of Itaewon, Hongdae, and Gangnam. The chapter concludes with a look at the above-ground neighborhoods of two subway lines and the new cities of Songdo and Paju. In his descriptions, King uses the idea of assemblage to describe how to experience Seoul: materially, expressively, and whether these two ideas stabilize or de-stabilize a particular place.

Chapter five, “New Culture: Seoul in the Korean Wave,” examines Korea’s preoccupation with the Korean Wave as a global cultural phenomenon and how digital media may create a new urban landscape for Seoul. 95 percent of South Korean homes are connected to cheap, high-speed broadband Internet (its nearest rival is Singapore at 88 percent). This infrastructure allows a digital culture to develop with Korean cinema, online gaming, pop music, and television dramas being produced and exported around the world, cultural colonizing countries like China. Design and architecture also is reconceived as to be applied to the digital world where digital content and images are to be beautiful as well as functional. Ross concludes this chapter by speculating whether Seoul and the Korean Wave will enter the space of the imagined cities of New York, Tokyo, or London that is not defined by geography but ideas, images, sound, and stories.

Chapter six, “Imaging the Nation,” takes a step back from its detailed look at Seoul and South Korea to underscore the book’s key themes: the obliterating of colonial memory, the recovery of antiquity, the naturalizing of material culture, and transposing of reality from colonization and tradition to autonomy and modernity. Each theme shows the tension between destruction and creativity and the local and the global in the history of Seoul and South Korea. It is only by understanding that its memory has always been bitterly contested that one will be able to understand and appreciate Seoul.

And yet for all its progress, King believes that Seoul is not ready for an ironic, anti-nostalgic view of its own history. Seoul still is nostalgic with reconstructed palaces and an unreflective modernist with its homogenously-looking tower blocks. But why this is undesirable is not made clear in the book. Are we to assume to that the apex of civilization is a western-styled irony and cosmopolitan-informed detachment? Perhaps it is but a case needs to be made for it rather than just being asserted.

Nevertheless, Seoul: Memory, Reinvention, and the Korean Wave is a unique and exciting approach to understand the contested memory of cities by looking at their historiographies and architecture. Theoretically grounded but written for the public, Seoul: Memory, Reinvention, and the Korean Wave provides insight into the history, urban design, and memory of the South Korean capital. To understand what Seoul once was and where it might be headed, King’s book is an essential book to read.

Your Kin-dom Come: The Lord’s Prayer in a Global Age