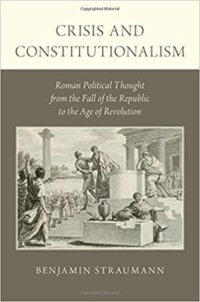 Crisis and Constitutionalism: Roman Political Thought from the Fall of the Republic to the Age of Revolution. Benjamin Straumann. Oxford: Oxford University Press, 2016.

This argument that the Romans had an understanding of constitutionalism is contrary to the civic republican school of thought: works by Philip Pettit and Quentin Skinner which argues that non-domination, not being subject to arbitrary power, was more important among the Romans than a constitutional mindset. In fact, in chapter one, Straumann acknowledges there was not a constitution in the first-century BC and instead focuses on the constitutional thought and arguments about various the legitimacy of various emergency measures. By examining first-century and second-century Roman political and legal thought, Straumann argues that the Roman understood that pre-political rules existed to constrain their politics, with one favoring the assemblies’ sovereignty and the other the senate, and that this constituted a constitution in their minds.

These accounts were most articulated in response to various emergency legislations (e.g., dictatorship, the senatus consultum ultiumum), which Straumann describes in chapter two. Concerns about these emergency legislations in turn prompted debates to limit popular rule, questioning the status of private property, and recognizing the importance of the right to appeal which is discussed in chapter three. To justify these privileges, there needed to be a pre-political account of them, which Cicero developed in his natural law theory and Straumann outlines in chapter four. The result is a type of constitutionalism, which Straumann defines and argues in chapter five, and is distinctive Roman.

What is most controversial about Straumann’s book is his interpretation of Machiavelli and his dismissal of the civic republican tradition (e.g., Skinner, Pettit). Vickie B. Sullivan already has written a critical account of Straumann’s book about his interpretation of Machiavelli, questioning some of his findings. Another controversial aspect of the book is the projection of the Roman constitutional tradition in the early modern period (e.g., his language of “proto-Hobbesian,” “proto-Lockean”). It is one thing to show how a tradition has influenced a thinker’s theory, which Straumann persuasively does with Ptolemy of Lucca, Salamonio, and Bodin; but it is another to suggest that these ideas are part of a Heglian account of history.

Because it challenges our conventional interpretations of Machiavelli and the civic republican tradition, Straumann’s Crisis and Constitutionalism is a critical book to consult about Roman political and legal thought. It uncovers a Roman constitutional tradition and how that tradition was received in the medieval and early modern period. Whether one agrees with Straumann’s account, he does show that the Romans were distinct and different from the Greeks and therefore the Roman tradition should be recognized for its importance in the development of modern constitutional theory.