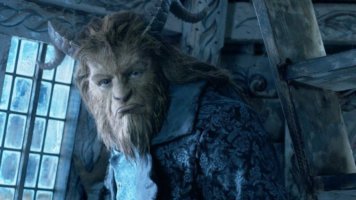 When I was growing up, there were two films the pater of my familias forbade his brood from seeing until we reached the age of 35: A Clockwork Orange (1971) and Bambi (1942). With a smirk and some curiosity, we obeyed.

This loyal filia no longer wonders why Bambi—instead she wonders why not Beauty and the Beast?

Politicized critiques abound, but they miss the film’s crucial theological background. This may seem hyperbolic, but read on: Beauty and the Beast is not just stupid but dangerous. It forgoes showing the effects and difficulties of the different types of love — eros and agape — in order to present romance as possessing godlike, transfigurative powers. The delightful score and charming characters prop up—let’s be kind—a morally obtuse tale.

The version of this tale that Disney made in 1991 is a classic, but only by virtue of its music. Alan Menken and the late Howard Ashman — and the actors who performed their songs — deserve credit for the rebirth of the animated musical, with Disney’s trilogy of Little Mermaid (1989), Beauty and the Beast (1991), and Aladdin (1992).

Beauty, surely the best of these, retells La Belle et la Bête, the 18th century fairy tale in which Belle falls in love with a cursèd Beast who had imprisoned her father and now imprisons her. Her love breaks the spell and turns him back into a prince. Disney has just released a live-action remake — a near duplication — of its 1991 classic, updated to seem more relevant, more avant-garde.

The trouble with Disney’s avant-garde, of course, is that it always arrives after the battle. A few decades ago, the depiction of mixed race couples (the remake shows off a good number) could really have meant something coming from Disney, but only by costing something from Disney: courage.

The same is true, more or less, when it comes to the much publicized (split-second and humorous) homosexual dance coupling that’s in the new version. The belated attempt to be daring is rather cloying.

It’s true in spades for the film’s faux feminism. Feminists hate classic Disney princess films. The heroines are too beautiful, often in an ultra-vanilla Barbie Doll way, and their lives resolve into wedded bliss with some boring prince charming. The Beauty and the Beast of 26 years ago already did something to correct this—first, by emphasizing that true beauty “is found within,” and second, by having the bookish Belle reject the advances of the village’s Ken Doll, Gaston.

Also, the film exaggerates and vilifies stereotypical male traits in Gaston (that hairy, hunting, Don Juan of an ex-soldier), and then caricatures men further in the Beast (who is violent, commanding, and even more hairy than Gaston). The taming men need from women, the film suggests, must de-masculinize them, and in his transformation the Beast not only grows soft and gentle, but also grows flowing locks on top of his head even as he loses hair everywhere else.

Evidently Disney wanted credit for going further this time, hence the remake is more loudly women’s lib. Belle is “ahead of her time,” “is not ready to have children,” and announces, “I’m not a princess.” Now an amateur inventor, she shows spunk and prowess in the STEM cognitive areas.

Both films, nonetheless, ultimately fall in line with the patriarchy as Belle, by definition beautiful, wins her prince. Stock feminist complaints about this should be dismissed. After all, feminism has become more broadly attractive since growing less hostile to both beauty and men. No — there are better reasons to be disturbed by Disney’s story.

Recall what the girl under his spell wishes to forget: The Beast imprisoned her and threatened her with starvation for not playing nice with him. And it is not merely Belle whom the Beast mistreats. In Disney’s most insightful move, the servants have been transformed into their master’s use-objects: a coatrack, a duster, an armoire. Some try to maintain their cheer and kindness, particularly the teakettle Mrs. Potts and the candelabra Lumiere (voiced in 1991, respectively, by Angela Lansbury and the late Jerry Orbach, who steal the show). The clock Cogsworth displays the typical psychological costs of living under the thumb of a domestic despot. It may seem ridiculous for a reviewer to diagnosis the animated timepiece with Battered Contraption Syndrome, but it does become a little creepy when this Disney character’s anxiety is played for laughs.

The new movie adds, unawares, another typical feature of the abused: self-blame. Mrs. Potts rationalizes that the servants have been punished, made mere things, quite justly — for did they not stand idly by when, after his mother’s death, his father spoiled the prince rotten? The remake adds this backstory to extort sympathy for the monster. (Poor Gaston gets no sad backstory.)

One might defend the film by emphasizing the moral of the story: love is blind, and the Beast shows he isn’t really bad on the inside. In the turning points of both Disney films, he saves Belle from wolves as she tries to escape. But if we thought about it for a minute, we’d realize he is saving her from a danger he himself has caused — another abusive pattern.

She nurses his wounds and falls in love — in a mixture of the Florence Nightingale effect and (according to a viral feminist diagnosis) the Stockholm Syndrome. Victims of the latter often are taken in by kindnesses from their captors, believing they know a side of the captors that would redeem them in society’s eyes if it were known. “There’s something in him I simply didn’t see,” Belle sings. We may fall for it, too, because it sounds so good. She sings, “I wonder why I didn’t see it there before,” but again, if we stopped to consider, we would wonder at her wonder. Belle, any friend would say, exasperated, remember the imprisonment and starvation thing?!

In the end, a feminist Stockholm Syndrome reading of these films does not suffice. But for one reason only: as Belle explains, “He’s different now. He’s changed somehow.” And this only gives us a better reason to object to Disney’s versions of the tale. We should ask, how did he change? This question, plus a little theology, provides the key for understanding the story.

By way of comparison, there’s another well-known movie about a beast under a curse seeking a belle’s love to save him. But Groundhog Day (1993) illustrates how people, by nature, actually do change: habituation. The endlessly repeated day in the life of weatherman Phil Conners (Bill Murray) as he visits the town of Punxsutawney, Pennsylvania, traces his development: from a mean, ambitious user into a man who learns that both happiness and true romance must elude a bad person. Now filling his days with beautiful and noble action, he lifts the curse.

Groundhog Day hints that it took the weatherman thousands of years in Punxsutawney to perfect his character. The woman (Andie McDowell) is inspirational, and she comes around to him in the end, but her love is a side-effect, a reward, not the cause of his transformation. Contrast this with the Beast’s change. When he feels nice feelings of love, he is tamed; when Belle reciprocates, presto, he is fully human.

One might be tempted to defend Beauty and the Beast from the domestic-abuse chorus by retreating into clichés like, “People can change” and “With love all things are possible.” It may even seem unforgiving, unethical — even unchristian — to resist believing such clichés, which contain some truth. Yet, it is important (and difficult) work to distinguish between Christian doctrine and the post-Christian imaginaries it has spawned. As Robert Sokolowski notes, such work “is like trying to distinguish a voice from its echo.”

In theological terms, the Disney story confuses the infused and the acquired virtues. By nature, human virtues of character are accumulated by repeated voluntary action, as in Groundhog Day. But according to Christianity, virtues can also be infused by grace, that is, by God’s love, agape. (A vivid example: Saul, engulfed in light, thrown from his horse — Acts of the Apostles 9.)

In Beauty and the Beast, it is not God who infuses the virtues, but the love of a woman. Disney conflates agape, not even with the more energetic eros, but with milquetoast romantic feelings. These warm sentiments now wield God’s power to convert character, however monstrous. Far from being part of the faith, this belief in the salvific power of love is, from a Christian point of view, hubris.

It gets worse. Both films end in the Beast’s physical transformation, secularizing the doctrine of the transfiguration according to which our bodies, by the power of God’s love, are to be raised and remade in heaven. Brilliance is, by tradition, one of the features of the glorified body. It’s said to glow. Belle has romantic feelings and — zap! — the object of those feelings is raised up, engulfed in light. The Beast’s body shines. Beams shoot from his fingers as he becomes a new man.

Mrs. Potts tells both Belle and our daughters, “Somewhere deep in his soul is a prince waiting to be released.” Maybe. But it is beyond any mortal’s power — even a woman’s — to liberate it.

Although many reasonable people believe in agape and many don’t, human romantic feelings cannot effect such transformations. Surely most adults wouldn’t say they can, but Disney’s original is meant for children, and the remake targets ’tweens. Such ideas maintain momentum in the imagination even after the intellect has dispelled them. Their naivete isn’t just lame; it’s bad for women and girls. One needn’t be a Freudian to recognize the Beast as symbolizing the darker sexual forces sometimes at work, in some people, of possession, control, and use.

It is not just Christians who should reject this Disney doctrine, this secular sacramentalization of the sentimental. And it is not just feminists who should mock this insouciant portrayal of abuse. What the film complacently endorses—a mélange of babe-in-the-woods spunky feminism, wimpy waxed men, and romantic wishful thinking—is no match for the monstrous potentials of human nature.

This was originally published with the same title in Law and Liberty on March 31, 2017.

Molly Flynn is an Associate Professor of Philosophy at Assumption College in Massachusetts. She is co-editor, with Robert Anderson and Scott Lee, of Who Are We? Old, New, and Timeless Answers from Core Texts (UPA, 2011).

Decentralism and Subsidiarity: Applications to Society and Culture