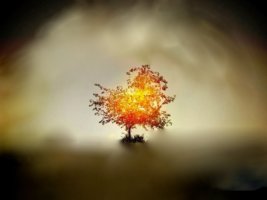 Let us begin our inquiry with the following datum: The human experience of the Divine Reality has often, though not always, been an encounter with a personal God, a God who is a Person.

Yahweh speaks directly to Abraham and Moses, Samuel and Jeremiah and others.

Jesus prays to abba, which is an intimate term like “papa.”

In the Itihasa (“sacred history”) of the Hindus, Krishna is both the God of the Universe and, incarnated in personal form, a friend to the royal family of ancient Bharata. A personal relationship with worshippers continues in the tradition of bhakti or devotion.

Zoroaster reports, in words that may well be his own original testimony, a personal encounter with Ahura Mazda – literally, the Lord Wisdom – the supreme god who seeks him out and recruits him as a messenger.

To speak personally, my own encounter with God is certainly with a personal God, one who hears and answers prayers.

In fact, when I pray, I often receive an answer in words, as if “a still small voice” were whispering in my ear. Voegelin clarifies what is happening when one has such an experience: “When in the revelatory process the hidden god . . . lets himself become manifest in visionary and auditory experiences, or in the ‘sound of gentle stillness,’ or in the meditative probing of the seeker, and thus be known against the background of his unknowability, the man who responds to the presence becomes conscious of his response as an act of participation in divine reality.” (The Ecumenic Age [EA] 52-3)

When I read a sacred text, I pray in a kind of lectio divina, and write down the answer I receive. I don’t take it to be the last word, but I do take it to be a clue, and I try to follow these clues as best I can.

Two of these clues are relevant here, and I quote them verbatim.

The second clue added: “I am also more than a Person.”

I take this to mean that God is a Person but that this symbol does not exhaust the Divine Reality. Other, quite different symbols, may capture other aspects, and all together may not exhaust the totality.

Receiving these clues several years ago prompted me to go back to Voegelin, to see what light his approach might shed on my own and others’ experiences of the Divine Reality as Personal. As it turns out, the two clues I received compare interestingly with two of Voegelin’s central insights:

(1) The In-Between is an ontological field that has two poles, the human and the divine.

Although Voegelin sometimes calls it Consciousness, the divine-human encounter is not just a subjective experience; it is the Divine Reality actually presenting itself in the In-Between. The very basis of Voegelin’s phenomenology is “the experience of participation, meaning thereby the reality of being in contact with reality outside myself.” (Autobiographical Reflections [AR] 72) “Movements of divine presence,” he says, are “not located in man’s stream of consciousness . . . but in the In-Between of the divine and the human. The experience is the reality of both divine and human presence. . . .” (AR 73) “. . . reality enters into the experience from both sides . . .” (AR 73-74)

(2) The presentation of Divine Reality and the symbolization with which it presents itself are not two different things – as if first there is a presentation and then it is articulated symbolically.

According to Voegelin, “The language symbols expressing an experience are not inventions of an immanenist human consciousness but are engendered in the process of participation itself. . . .A symbol is . . . engendered by the divine-human encounter and participates, therefore, as much in the divine as in human reality. . . . symbols do not simply signify a divine reality beyond consciousness but are somehow the divine reality in its presence itself.” (AR 74)

But what are we to understand by this symbol? What does it mean for God to be a Person?

A third clue I received in prayer is relevant here: “I could not become a Person without there being other persons. The personal is essentially interpersonal.”

1. As I later discovered, this is the central thesis of John Macmurray’s Gifford lectures, Persons in Relation: “Persons are constituted by their mutual relation to one another.” (PR 24) The personal is a relational reality. A thing, such as a rock, is not a relational reality in the same sense. A lone rock could actualize its full being in an otherwise empty universe. A lone person could not. A person, whether human or divine, must have a mirror, a suitable other, someone who can look back. When God says of Adam, “It is not good for man to be alone” (Genesis 2:15), He might as well have been speaking of Himself. In the Mayan sacred text, Popol Vuh, God seeks to make creatures who can “walk and talk and pray articulately.” His first efforts are failures and he persists until he succeeds.

2. The personal is interpersonal, and the interpersonal is particular. It is not a relation to the bare fact that other persons exist. It is a relationship with particular individuals, like Abraham and Moses, like Zoroaster and Arjuna, like you and me. And sometimes to groups, like the Pandavas, the royal family befriended by Krishna, and the People of Israel – “I have called you by name, you are mine” (Isaiah 43:1). The relation is not abstract – if it were, it would not be personal.

3. God is not just in a distant – impersonal — relationship with people; He cares about them. If you care about someone, you are affected by what they do and by what they undergo. Before the Flood, God is so disappointed in his creatures that “he was sorry that he had made man on earth, and he was grieved at heart.” (Genesis 6:6) He loves people – “I have loved you with an everlasting love” (Jeremiah 31:3) — loves them so much that they often make him so angry that “at his wrath the earth quakes” (Jeremiah 10:10). On the other hand, when Jesus is baptized, God declares himself “well pleased” with his Son (Matthew 3:17).

There is a theological doctrine of divine impassibility based on the belief that affects are incompatible with divine perfection. But even those who hold this doctrine do not deny Paul’s insight that “God so loved the world.” There may be dimensions of the Divine Reality that are devoid of affect, but the personal God is not and cannot be.

5. The great French personalist, Emmanuel Mournier taught that to be a person is to be in the process of becoming a person. (Personalism, passim.) By relating to other human beings, not just as means to one’s own satisfaction, but as autonomous centers of action and desire, as bearers of rights and as members of a community, one becomes a person. To be a person is not just a fact, but an achievement. Through our relationships, latent traits become actualized. Through loving and befriending, we become friends and lovers.Through relationships, including our relationship with the Person who is God, we move toward our fullness as persons.

According to another clue I received, prior to reading Voegelin or Macmurray or Mournier, this is true not just of human persons but of the Divine Person as well: “Can’t you see that [in these later scriptures] I am manifesting Myself in a more differentiated, more fine-tuned, multivalent form? This is in part because of their capacity for receiving such a communication, which enabled Me to differentiate in response. . . . It was not just them. It was My development as well.”

Mournier’s insight and the clue I received suggest that, as the Divine Reality articulates itself in the In-Between as a Person in a relationship with specific human persons, God for the first time fully becomes a Person. God’s latent capacity to be a Person – and a Lover, a Ruler, a Judge, a Savior, and so forth – is thereby actualized. When Abraham persuades God to save Sodom if there are ten good men there, God actually becomes more just – He lives up to his role as law-giver and judge. With the advent of Christ, God has a new relationship with human beings, adding a new, intimate dimension to his divine personhood. One might say the same about Krishna when he incarnates.

As Voegelin explains: “. . . when the word moves from the Beyond into man’s consciousness, it reveals itself through language. And in this revelatory language, the [divine] I-am becomes a subject that acquires predicates. On the side of the subject, the god who reveals himself is absolute Being; on the side of the predicate, he is what he lets be seen of himself concretely in the revelatory event. In the Thornbush episode, he is the I-am who sends Moses to his people.” (EA 61, italics added) Through his revelation in Jesus, he becomes the I-am that is “the way, and the truth, and the life.” (EA 61) Critical doubts about such revelations presume, Voegelin says, that “the critic knows how God has a right to let himself be seen.” (EA 307)

When Voegelin writes about “reality becoming luminous to itself,” it is not only that human beings are becoming enlightened; the other pole – the Divine Reality – is also becoming luminous to itself: “… the reality itself … becomes luminous for its movement toward transfiguration.” (EA 386) Or, as I received in prayer: “The learning for man is also a learning for God.” Just as we are becoming more fully human, the Divine Reality is becoming more fully divine. This process Voegelin calls “the process of transfiguration” (EA 387), “the movement of reality beyond its structure.” (EA 386)

6. In The Ecumenic Age, Voegelin discusses three areas of Reality: the world, the In-Between, and the Transcendent. The world has time but not meaning. Human existence takes place within the world but achieves its meaning through the divine-human encounter.

I want to suggest that the same ontological structure applies to the other pole of the encounter. The Divine Reality, appropriately symbolized as eternal, “realizes itself in time” (“Eternal Being in Time,” Anamenesis [A] 116) in the In-Between, in the “. . . mutual encounter and mutual penetration of temporal and eternal being.” (A 132) It is through participation in the divine-human encounter that the Divine Reality achieves its meaning.

Jerry L. Martin held held senior positions at the National Endowment for the Humanities in 1988-95, including acting chairman. From 1967-82, he a Professor of Philosophy at the University of Colorado at Boulder, where he also served as the Director of the University's Center for the Study of Values and Social Policy. He is author of God: An Autobiography, as Told to a Philosopher (Caladium, 2016) and currently is chairman emeritus of the American Council of Trustees and Alumni.