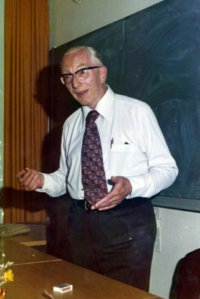 Tilo Schabert’s wonderfully vivid description of Eric Voegelin’s work habits and his life in Palo Alto brings back many memories of my own during the years when I lived in Plato Alto, 1975-76, and the years following that initial time, when I was either spending my summers there or was a guest at Sonoma Terrace for shorter vacations. I kept a journal during that time from which I later excerpted all those passages that reported conversations, either at the Voegelins or over the phone when I lived in Boulder, right up to that January morning in 1985 when Paul Caringella called me to tell me that death had come.

When I look at these notes of our conversations, I always see them as stimuli for further thoughts of my own, often of a breadth and magnitude that would require at least an article, more often than not, a whole book to do justice to them. Voegelin was a superb listener. Leaning back, puffing on his cigar, he would not avert his eyes from his guest, by no means intimidating so at least it would seem to me after a bottle of Cabernet and a couple of cognacs.

Voegelin as a teacher, that means to me first of all, Voegelin as a keen observer of the person with whom he was having a conversation and as someone who visibly thought your thoughts with you, which my by no means meant that his thought processes would arrive at the same end as your own. This is when things would become extremely interesting; for then you knew that something important was going on, something that embodied to me the essence of Wissenschaft and philosophy. Voegelin never had any need to interrupt, except to interject “what do you mean. I do not understand,” when I had once again failed to express my thoughts clearly.

It is the sign of a sovereign thinker that he has no need to mention his own writings on a particular subject and that he does not chew the cud of old accomplishments. When Voegelin invited you to read something he had written it was, as Tilo Schabert points out, “work in progress.” Voegelin invited you to think with him, not about him, not against him, but about the subject matter. Criticisms were welcome and would be seriously debated, until they could be either shown as valid or lacking in substance. What I personally valued more than anything else in Voegelin’s thinking was its analytical power. He was the only man ever from whom I would accept statements about what cannot be proven, because I knew that if anyone ever had, he had thought it through and had not relied on intuition.

Even as a young beginner in 1964/5, I somehow managed to take notes in Voegelin’s lectures and seminars that are actually coherent and still make sense today. Those days of the week when I attended a lecture or a seminar of his were holidays for me, moments of complete attention, as I have only experienced in listening to music that is very important to me. But my attention was never what I would call worship-generated; I rather experienced it as time spent in great ease, as an enormous enjoyment, to put it the way I actually felt at the time.

I have had two magnificent teachers, Eric Voegelin and Gregor Sebba, and thus I have actually points of reference for comparison. Sebba’s style was completely different from that of Voegelin’s and reflected his way of thinking just as well as Voegelin’s style reflected Voegelin’s thinking. I used to call Sebba my Settembrini and Voegelin my Naphta when I was writing my dissertation on Thomas Mann’s Magic Mountain. Today I am not so sure any more. Sebba invited his students into dimensions of thought and reality that Voegelin tended to eschew as a teacher, even though he was quite capable of entering them in his private thought. Ultimately, when you followed each of them, you could, even by taking different paths, suddenly understand what both of them called “transcending,” something I like to visualize as reality becoming transparent for something that is also reality – only different.

To me those were moments of clarity that have provided me with joy and direction in my life and thinking.

Thomas Hollweck (1943-2011) was chairman of the Department of Germanic Languages and Literature at the University of Colorado, Boulder. He was one of the four members of the Editorial Board that oversaw publication of the Collected Works of Eric Voegelin and he himself edited three of the volumes.