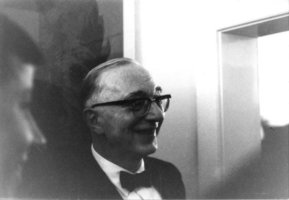 Eric Voegelin (1901-1985) was one of the greatest political theorists of the twentieth century. Along with Hannah Arendt (1906-1975) and Leo Strauss (1899-1973), he is usu-ally named as one of the three most outstanding representatives of neo-classical political philosophy. Born in Cologne, Voegelin moved to Vienna in 1910 where he received his intellectual formation, especially during the 1920s. At the time, Vienna was a kind of intellectual center of the world, home to scholars like Ludwig von Mises, Friedrich von Hayek, Othmar Spann, Georg Simmel, Hans Kelsen, Sigmund Freud, and others. In his Autobiographical Reflections, dictated and transcribed in 1973, Voegelin reflected on these early, formative influences.

The publication of in 1938 of Voegelin’s The Political Religions, which was critical of mass ideological movements like National Socialism, forced him to leave Austria—which, that same year, became part of the Third Reich after the Anschluss (or annexation). He settled in the United States and between 1942 and 1958 was professor of political science at the Louisiana State University in Baton Rouge.

It was during this period that some of Voegelin’s most important books were published: The New Science of Politics in 1952 and the first three volumes of his five-volume Order and History between 1956 and 1957. Voegelin spent the next eleven years back in Europe, where he founded the Institute for Political Science at the University of Munich. His inaugural lecture there was on “Science, Politics, and Gnosticism,” which took up his thesis from The New Science of Politics—namely, that large parts of modernity have been characterized by a Gnostic (gnosis = knowledge) trait. According to Voegelin, Gnosticism refers to the conviction of certain thinkers that having access to the “right” knowledge will permit them to transform the world through political action.

After retiring in 1969, Voegelin went back to the United States, this time to the Hoover Institution at Stanford University in California, where he remained until his death in 1985. His time there was spent researching and writing extensively. Volumes IV and V of his Order and History were authored there, as well as parts of his eight-volume History of Political Ideas. In the past decade, the University of Missouri Press has published Voegelin’s Collected Works in 34 volumes.

The most crucial of Voegelin’s ideas are best introduced by referring to three of his principal works: The Political Religions, The New Science of Politics and Order and History. In The Political Religions, Voegelin strove to show that politics has a dimension often neglected or ignored by politicians and scientists: a religious one. That dimension has become increasingly apparent not only during the last several centuries, but especially during the twentieth century: Russian Communism, Italian Fascism, and German National Socialism were, in the end, nothing but expressions of distorted religious ideas turned into political ones.

With regard to such forces, Voegelin stated that “there is evil in the world and . . . that evil is not only a deficient mode of being . . . but also a real substance and force.” Thus, the desire of Communist, Fascist, or National Socialist leaders to “redeem” the world revealed an evil—and sick—understanding of God, man, and society.

Much like today, the world at the time that Voegelin wrote was experiencing a serious crisis. He thought it was important to acknowledge “that recovery [could] only be achieved through religious renewal.” He wrote that since “[h]umans live in political society with all traits of their being, from the physical to the spiritual and religious [ones],” neglecting, ignoring, or even eradicating any one of these traits could have disastrous consequences.

In The New Science of Politics, Voegelin made the strong and provocative assertion that modernity is essentially characterized by Gnosticism. He did this in a sweeping analysis of human history. In contrast to antiquity, where the world was experienced as being full of gods, Christianity reduced this multiplicity of gods to one single God and transferred this one God from the sphere of immanence—of the here and now—to the sphere of transcendence—the beyond. The consequence of this was the “dedivinization of the temporal sphere of power.”

Although the world was thus seen as having been emptied of gods, people continued to strive for meaning and acquire a deeper understanding of their earthly existence. In the course of the development of the modern world, thinkers began to fill that “divine emptiness” or void by declaring earthly beings— like man, society, or even history itself—absolutes. In this way, spatiotemporal things were effectively extracted out of their time and space, and made into absolutes.

Voegelin therefore designated modernity as a process of the “redivinization of man and society.” In other words, the world, formerly emptied of gods during the Middle Ages, was again filled with gods—human-made ones (which humans know how to create and venerate).

In his Order and History, Voegelin further elaborated the manner in which man articulates his own nature in history. He differentiated between three insights gained by humanity. First, in the Ancient Near East (Israel), man discovered his existence as determined by the rhythm and the secrets of the all-encompassing cos-mos (i.e., “cosmological truth”).

Second, in antiquity (Greece), man detected the central position of himself in the cosmos and realized his intellectual and spiritual qualities. The human soul was identified as a “sensorium of transcendence,” which allowed man to escape the narrow confines of his bodily existence and advance to areas far beyond it (the so-called “anthropologi-cal truth”).

The third step was taken by discovering the close connection be-tween man and God in Christendom. Unlike the anthropological truth, which maintained that men lived in accordance with a higher power (the Greek nous), Christendom accentuated the experience of “mutuality” in the relation between God and man.

In other words, man turns to God in a similar way that God reveals himself to man. Voegelin designated this insight as the “soteriological truth” and stressed that beyond the pure mutuality between God and man, there was also the aspect of man’s salvation through man’s belief in God.

The centrepiece of Voegelin’s thought, however, consisted in his philosophy of history. The three types of truth mentioned—cosmological, anthropological, soteriological—are all of fundamental importance in this context. For Voegelin, the comprehensive picture of history displayed a “civilizational cycle of world-historic proportions.” He wrote: “The acme of this cycle would be marked by the appearance of Christ; the pre-Christian high civilizations would form its ascending branch; modern, Gnostic civilization would form its descending branch.

Voegelin thought man had descended in various guises from the high level of insight and self-realization obtained in ancient times, and had attempted—through access to allegedly secret or higher knowledge (Gnosticism)—to rescue himself and redeem society. Gnosticism had thus distorted and destroyed the relationship between God and man; and, in this way, it had prompted man to take destructive actions. Thus, it was Voegelin’s firm conviction that human life and human history can only evolve in a natural (and sound) way on the basis of the profound insights obtained in antiquity and early Christendom, and that man needs to develop a balanced life which encompasses the physical as well as the spiritual and religious spheres of life.

Over the years, Voegelin’s thought developed into a very comprehensive and detailed philosophy of history. The very kernel of his thought was the thesis that, after achieving the three decisive leaps of insight into the nature of God, man, and society during the various pre-Christian “high” civilizations, the path of humankind was “derailed” from this high intellectual and spiritual level.

The spread of Christianity in the Middle Ages had helped people lead a more genuine life; but with the advent of modernity, new worldly philosophers had laid the basis for societies to move increasingly toward political ideologies—and, in the twentieth century, toward mass political movements. Only by acknowledging the insights of classical and Christian civilizations, Voegelin admonished, could people once again lead a genuine human life.

This was originally published with the same title in The European Conservative.

Harald Bergbauer is a Board Member of VoegelinView and a Professor of Business Ethics at the University of Applied Sciences in Munich, Germany.

A Popular Defense of Our Undemocratic Constitution

Gnostic Rebels Trapped in Prison of Their Own Mind

Joan of Arc and the Challenge of Spiritual Discernment