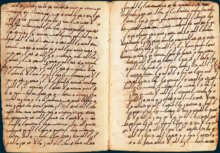 Acme is not a name used very much anymore, but as one goes around Toronto, one may see an Acme bar, or an Acme laundry, and imagine these as the last traces of the once powerful Acme Corporation, widely diversified, famous for supplying weapons, all useless, to the Coyote in his pursuit of the Roadrunner.

Someone might say that Latin and Greek answer this description, but perhaps not so. Latin did not die, after all; Latin rolled right on, changing as it went, and became Spanish, French, Romanian and that sheaf of languages known as modern Italian. Just so the dinosaurs dropped the sixty-feet-long-and-stomping-about part of their business and refocused, prioritized! on feathers and flying. Any Greek will affirm that modern Greek is a thing as continuous with ancient Attic as English is with old English or Coptic with Egyptian.

But behind these familiars, lies a real ghost language, Aramaic. Aramaic was a world language, a default language, much as English is now, and its case is worth a little contemplation.

Aramaic began to make itself felt about the year 1000 BC as the speech of the Aramaeans, a fringe group in the Mesopotamian world. Over several hundred years Aramaic displaced Akkadian, the official languages of Babylon and Assyria. Why, it is not clear. Perhaps the Aramaeans, as an outsider group, were more mobile. Or pushy. Perhaps Aramaeans were willing to take scut jobs like mowing lawns and standing all day in fast food restaurants. At any rate, Aramaic became the working language of the Neo-Assyrian empire, the Neo-Babylonian empire (which lasted as long as Neo-Coca Cola) and then the Persian empire, and for hundreds of years after the Persian empire.

This gave Aramaic a truly impressive range of use, from Hadrian’s wall down to Arabia and deep into central Asia. It was everyone’s second language. And this state of affairs went on until the Islamic conquest, and probably for a good while after. Longer history than English has.

If it was so great, what happened?

Aramaic was in a sense a victim of its own success. Widely used, in every locality it sharpened into a local dialect and these drew apart. What Arabic had going for it, aside from being the language of new and energetic and armed elite, was a standard text, a universally studied text, to serve as a control on linguistic diversity. So now, all over the Arabic speaking world, everyone uses the local dialect, Moroccan Arabic, Levantine Arabic, Bug Tussle Hollow Arabic, and everyone understands a standard speech, nice Arabic aye az doo tha quality talk on thay radio, aarrrr.

Again, the comparison with English is striking. English too has split into dialects, Glasgow, Thames Valley, Alabama, Mumbai. What keeps  us together or roughly together is electronic communications. Modern Standard English is now BBC English or NBC English.

Well, things pass. Aramaic is not the first language to disappear and will not be the last. Even now minority languages are going out of business at a terrific rate; we will come back to this  in a moment. .

At last report, Western Aramaic was spoken in three Christian villages in Syria.  Whether these villages, or the villagers, still exist, is anyone’s guess. Eastern Aramaic continues in the Assyrian communities of North Iraq. Yes, there are still Assyrians, really.  Prospects not good. The Syrian Orthodox Church keeps Syrian Aramaic as a liturgical language and there is a lot of classical Christian Syriac literature. We are getting rather low on Syrian Christians, of course. Biblical scholars learn enough Aramaic to read certain chapters in the Book of Daniel. Archaeologists read Aramaic in cuneiform. Lastly and most significantly, Talmudic scholars learn Babylonian Jewish Aramaic to read the Gemara.

None of these groups really communicate with each other. So, if the impulse drives one to tackle Aramaic, the first question is, which variety to learn? The writer is still struggling through BJA.  By the way, it is tough enough, though no tougher, we suspect, than Hebrew. There is the lack of vowels, of course, in the script and the collapsing verbs that appear in most Semitic languages.  But how much of this will be of use in the other kinds of Aramaic, or one might say in other Aramaics, it is difficult to say. The case of Talmud Aramaic seems to us to have a certain piquancy to it:  the World language is now studied to clarify issues in Hebrew, the language of a despised minority.

Such are the facts, but what can we make of them?  We could try some classification:

Genus: languages as good as dead.  There are lots of others and more and more every year.

“Dead” has several aspects, but the one we like is that when one only uses language X to illustrate language X itself, that language is defunct. Thus all poems composed in Latin today have as their topic “look, this is a poem in Latin.”

What do we lose when a language dies?

The Neo-Whorfian’s, a declining band, would say that we lose a particular model of thought processes. If Apache disappears (don’t worry, it’s fine for now) we lose Apache patterns of thought.  That is, the way Apache think, not what they think. What they think, of course is their business, and they do not welcome curiosity.  But the Whorfian hypothesis seems to be largely exploded.

The nationalists complain that to lose one’s language is to lose group cohesion and national identity. All Quebecoises should speak Quebecois French. Or else.

This seems a little closer, if one could discard the aggression. The words in a particular language, “dog”, “chien,”  “currus,” “ναυσ,” “melek,”  are not so much references as evocations of the community experience of those using a particular word.  “Dog” is a creature seen by an Anglophone.  The person who notes a “chien” in the street is someone for whom “street” signals a place inhabited by les maudits Anglais.

What we could say on this point then, is that having “lost” Aramaic we have lost the Aramaic world, or an important part of it.  There doesn’t seem to be much remedy to this except to recognize the fact. To have learned something, says St. Thomas, is one of the remedies for sorrow, (along with a good cry, the sympathy of friends, indulgence in some modest pleasure, and a hot bath).

What about Aramaic as vanished world language, the subspecies?

Contemplation here may lead to gloomy reflections about the English language. But while reflection may be merited, gloom at impending loss of status is not necessary.

It may be that many of us are more pleased with the worldwide use of English than is justified by its practical advantages.  We are linguist chauvinists under the skin. This is not a virtue. It is a virtue to love and respect one’s own language and be happy for what it provides us. How nice to be able to read Wallace Stevens with empathy! But it is not a virtue to consider that English is better than what those bloody foreigners talk. Its not better, it’s as good.  We should remember the b.f. think the same thing.

Remembering Aramaic on this grounds can go a little way to giving us some philosophical distance. Languages come and go. That is a reality and a truth, and to understand it is a step to happiness.

A postscript: There is a problem that puzzles your columnist, and perhaps the learned may respond.

A language so widely used, used for so long, and by so many people, ought to have left us a literature at least as large and varied as classical Greek. Human beings will write if they can and they will write to be read.

Where is all of this literature? Syriac literature is rich, but it is only one area. The Talmud is extensive, but the business of a minority. What is left in Aramaic must be a ridiculously small fragment of what was produced. What happened to it?

Is it possible there has been, unrecorded in history, a literary genocide?

The Resentful Politics of Populism

The State of American Liberal Education These Days

The Shape of Water: Non-Potable