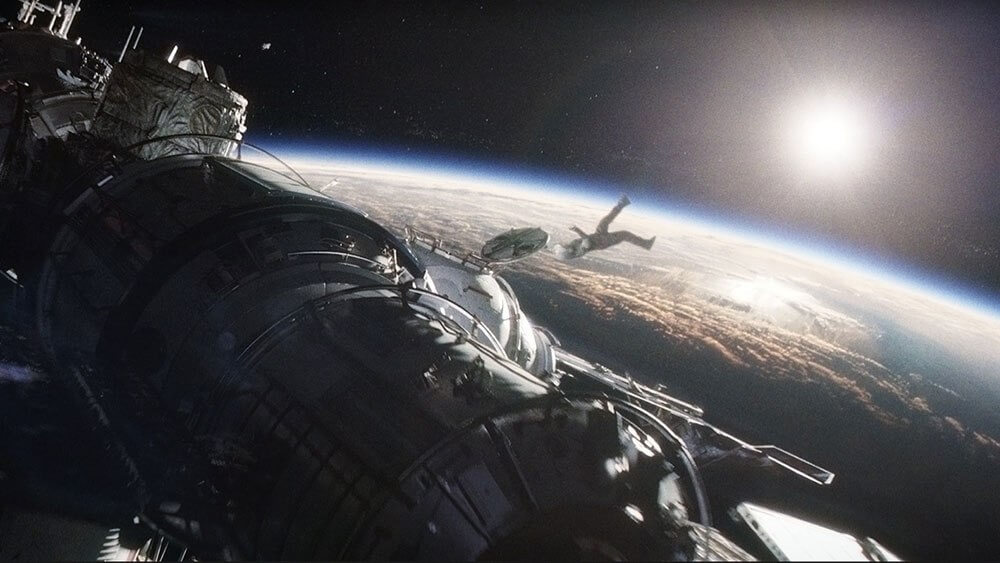 There are innumerable ways in which the modern soul seeks to transcend or escape the vicissitudes of reality as we now experience them. From new age prayer forms with crystals to pseudo-yoga meditation to drug abuse, from consumerism’s delights to immersion in technology, or even desiring to leave the earth altogether to live in a colony on Mars, people are trying to rise above the suffering body and the dissatisfactions of Creation. The movie Gravity brings us back to earth. The human person—body and soul—are rooted to the earth, regardless of eternity’s place in our experience, or Creation’s eternal origins. To separate ourselves from our earth or our body in any way is to remove something sacred from under us.

There is much to celebrate about being human in Gravity. One only has to observe the opening scene to witness the wonders of our scientific and technological achievements that allow us to exist for even a moment in the vacuum of outer space. Added to that is the fact that human beings in a hostile environment are able to not only work together in a mature manner but to enjoy themselves playfully. We can truly amaze ourselves, can’t we? We also witness the fallen nature we are encumbered by. Dr. Stone, whose story becomes central to the movie, is physically ill, the Russians have recklessly destroyed what in all probability is a spy satellite, and the fragility of what we build, to say nothing of our physical lives, is destined to exist for only a short time in the grand scheme of things. The question can be asked, what is the point? Yet there is a point, it would seem, because no one wants to give up life and learning willingly.

After disaster has left Dr. Stone and her commander, Matt Kowalski, alone and drifting in the zero gravity of space, the viewer’s attention settles on Stone. We experience her disorientation and the futility of trying to survive an out of control spin with no gravity there to settle her on a point of reference. Kowalski now becomes a friend and a firm, settling presence. He lays down his life for her, doing everything in his power and more to help direct her back to safety on earth. As they drift together Kowalski urges Stone to share something of her life, and we learn how Stone has been drifting through life for years since the death of her young daughter. Life can be terrible for its uncertainties and cold, unexplainable endings. There is no acceptable explanation to offer a parent who has lost the love of their life. And without firm lines to guide her mind and heart, Stone is drifting through her life in a type of spiritual zero gravity. Her physical drift in outer space is not influencing her state of being as much as this painful matter of the heart.

Gravity reminds us of the foundational role Creation plays in our consciousness. Through the movie, earth, in all her splendour, gleams like a gem in the background, an orb glimmering with life in contrast to the anti-life that is the vacuum of outer space. In a Russian spacecraft we see an icon of St. Christopher. In the Chinese space craft an icon of Budai. The glimpse of these icons is enough to call on the viewer to reflect on these small glimmers of faith in the technological marvels of a space craft in orbit far above the earth. How can religious faith ground us firmly in a life that remains frustratingly beyond our control and comprehension? Does a religious icon in space remind an astronaut of where they come from and the meaning to be found in their experiences, no matter how anxiety filled certain moments in a hostile environment may be? Can a human being remain in a featureless landscape or space-scape without being rooted in a comprehensible faith? How else can one avoid the dangers of nihilism? A radio conversation Stone has with an Inuit man far below further underscores the wonders of our earthly home. The intimacy of the radio communication draws on the simplicity and beauty of relationship with another soul. Life is about our relationships, and it is about having the opportunity and privilege to reveal our soul to another. Stone feels this so acutely that it breaks her. She realizes what she is missing, and that missing part of her seems irrecoverable. “Who will pray for me,” she asks herself. She cannot find an answer.

The Mystery of Being is further enhanced in Gravity by the angelic visitation of the presumed dead Kowalski to the slowly dying Stone. This scene reminds us that even in our own experiences, we as rational beings are not the final arbiter of meaning in our lives. We are visited by dreams, signs of a mysterious origin are revealed to us through the course of our lives, and we are guided by insights and second sights that baffle the rational control we like to exert over reality.

Upon being reinvigorated by the angelic vision of Kowalksi, Stone continues her fight for life. She wants to dwell in Creation once more, and goes to extreme lengths to get there. And upon plunging into the waters of earth, shedding her space suit she emerges from the embryonic waters to shore in an infant like state. She feels the soil and smells it. Stone realizes she is surrounded by a miracle. Crawling forward and slowly bringing herself to stand, Stone begins. She has been reborn in every way. Heartfelt pain has not been relieved for her, but she has stepped back into Creation with new eyes. She will live life fully with a new reference point to guide her, a reference point that cannot be pointed to but which grounds her nevertheless.