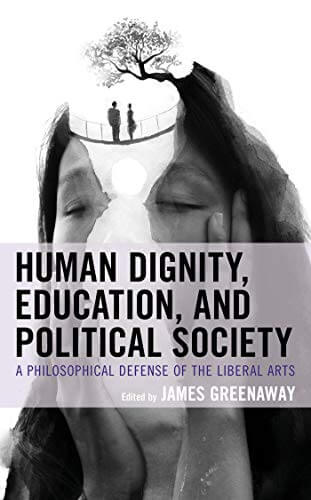 This is James Greenaway’s presentation about his book, Human Dignity, Education, and Political Society: A Philosophical Defense of the Liberal Arts, at the 2020 Eric Voegelin Society Meeting.

A life of liberty and responsibility does not just happen, but requires a particular kind of education, one that aims at both a growth of the human soul and an enrichment of political society in justice and the common good. This we call a liberal education. Forgetfulness of liberty is also a forgetfulness of the multi-dimensional nature of the human person, and a diminution of political life. Keeping in mind what can be lost when liberal education is lost, this volume makes the case for recovering what is perennially noble and good in the liberal arts, and why the liberal arts always have a role to play in human flourishing.

Human Dignity, Education, and Political Society: A Philosophical Defense of the Liberal Arts was published in July 2020. It features contributions from Alex Ambrose, Carol. B. Cooper, John von Heyking, Glenn “Chip” Hughes, Rebecca LeMoine, S.F. McGuire, Lee Trepanier, Ann Ward, and myself. The chapters of the book were originally papers written for presentation at a conference in San Antonio, TX, which I organized in May 2019. The idea was to bring together political philosophers, each familiar to some degree with the work of Eric Voegelin, to discuss the intersection of three themes (dignity, liberal education, and politics), and to discuss what that intersection looks like, and what it means. What happened was that, although unplanned, a very happy clustering of papers occurred: there were papers on the nature of liberal education; there were papers on the history of liberal education; and there were papers on practical issues related to liberal education; all of which clusters were unpacking the significance of human dignity and the impact on political society in the course of their discussions.

At the meeting of the Eric Voegelin Society in September 2020, the theme of the book was discussed at a roundtable panel. The following are my remarks, drawn from the introduction to the book. I reflected on the work of the liberal arts in prison, which is something like a pure educational experience in the sense that it is education only for its own sake and not for the sake of specific skills or jobs or other outcomes.

Since the spring of 2017, I’ve been teaching philosophy courses centered on the topic of human dignity to inmates in one of our Texas State Prisons. I would say that what liberal arts education offers to the prisoner is itself a snapshot of what it has always offered the world more broadly: the invitation to contemplate meaning, fulfillment, and happiness. Let me quote one of my student inmates. In a written assignment on Viktor Frankl’s Man’s Search for Meaning, he commented:

When I am learning, I feel alive, I feel free. Mr. Frankl reminded me of a simple yet powerful truth: the truth that love is the ultimate and highest goal to which man can aspire. In prison, you cannot escape the truth. The truth of your personality and temperament, the truth of your physical stature in comparison with other men, the truth of your skills and your shortcomings, the truth of your strengths and weaknesses. In prison, you live amongst victims and perpetrators, amongst predators. Thanks to the poetic words of Frankl, I was assured that my search for wisdom was not in vain. [Frankl wrote] “The salvation of man is through love and in love.” [This] is a quotation that sums up survival in prison. It resonates in the whole world.

So, truth, consolation, love: this is what a liberal education meant to my student. Some inmates told me at various times that, had they been exposed to texts and engaged in discussions like these earlier in their lives, their lives may have gone very differently. That’s quite a claim. Of course, it’s impossible to measure its veracity, but it surely means something when such claims are made. Finally, one man in his fifties hung back after we wrapped up the first course. He had been extremely quiet and had not spoken during the discussions, but his written reflections had been consistently penetrating, candid, sorrowful, and full of luminous self-presence. He wanted to tell me that the course had taught him something for which he was grateful: that he could think. He said that he never knew this about himself. He had conceived his thinking to be merely an instrumental “figuring out,” and had gauged his ability to do so against the “figuring out” abilities of others, finding himself to be lacking. What philosophy had revealed to him was that he could think in the noetic sense, in the existential sense. As Voegelin himself wrote:

Noetic experience renders the tension toward the ground of being conscious by differentiation, thus disclosing it as the core of all searching for the origins of order. … Noetic experience does not yield knowledge of a reality hitherto unknown, but makes possible a differentiated insight into a reality that hitherto has been experienced compactly.[1]

My inmate-student’s gratitude conveyed to me that philosophy had presented him to himself in a new way, had opened up in him a way to reconcile himself to himself. This man had undergone a differentiation of his own consciousness, or a growth of his own soul, through engagement with the noetic reasoning of philosophy. Isn’t this restoration of the prisoner to himself surely the beginnings of restorative justice? (To be restored to one’s own dignity as a person must be the precondition to realizing the dignity of one’s victims, and self-forgiveness as the necessary requirement to seeking forgiveness from others. In the absence of forgiveness and love, there is nothing but punishment.)

In effect, teaching in prison was something like a test of liberal education’s invitation to become a better person, in the very place where the failure to live out what is highest in one’s personhood is punished for the harms it willfully inflicted; and the result, I venture to say, was philosophic friendship. Ultimately, the prisoners and I found we were talking about what we loved in common. Theirs were the insights into a common humanity that I, the professor, did not have, but which were shared through the willingness of the inmates to appropriate and discuss the material. And while theirs are the lives which I have not lived, they nonetheless echo Terence’s reminder, “I am human, and nothing human is alien to me.”[2]

Perhaps then the first condition of a liberal education is humility. After all, one does not “teach” human dignity, and one does not “teach” liberal education, in the sense of transmitting data. To educate liberally means to invite the student and one’s own self to think seriously about one’s life and the things we love in common in the context of some of the most profound insights into the meaning of being human that great texts lay before us, and to be attentive to insights that emerge from one’s own soul as one ponders these texts in conversation with others. Liberal education, properly conceived and conducted, can restore a sense of one’s own dignity as a human being, a human being who belongs: who belongs in the cosmos, who belongs with others, who belongs both to the times and to the horizon of history, and who belongs with one’s own self in forgiveness and truth. A liberal education can give the student the eyes to see the dignity of others who, in their own way, share one’s own human predicament.

Liberal education amounts to what we can call soulcraft. Soulcraft is the hard work of thinking for oneself in a noetic sense. It’s the root remedy to the sort of echo chamber non-thinking that the modern university risks becoming. The reason we need the liberal arts to flourish now, perhaps more than ever, is that, although political society is always more turbulent than either the technocrat allows for, and always more complicated than the ideologue is willing to tolerate, we are living in times when turbulence and complication have become more ever more amplified. To affirm a robust politics of liberty is to affirm the dignity of persons that politics must serve; and it is only a genuinely liberal education, only genuine soulcraft, that can help the student to find his or her existential bearings amidst the slogans, turmoil, manipulation, shaming, and other cultural and political crises and sophistries of the day.

The nine chapters in this collection arrange themselves into three loose clusters on the basis of scope or topic. The first cluster, under the heading of “Liberal Education and a Life Well Lived,” focuses on the nature of liberal education in the context of political society. The themes of dignity and friendship, of truth-telling and thinking, of liberty and equality, are pervasive and seek to establish for another age the case for liberal education. The second cluster of chapters is entitled “Thinkers on Dignity and Education in History.” These take an historical perspective of the development of liberal education in connection with philosophical developments in thought related to the intrinsic worth of individual human beings and political community. Neatly, the chapters focus on ancient, medieval, and modern education, through a discussion of the philosophical thought of primary thinkers. “Contemporary Topics in Dignity and Education” is the name of the third cluster, which works as a snapshot of the contemporary scene in our educational landscape. Chapters here present issues of dignity, education and political status as related to women, children, and identity politics.

These three clusters are, as mentioned, only loosely arranged. Each of the chapters complements and extends, or occasionally challenges, the arguments set forth in other chapters. A fortunate characteristic of the original symposium was a cohesiveness that bound each of the contributors, and this was centered in a commitment to think about the convergence of dignity, education, and politics. This collection then is no “grab bag” of unrelated or only marginally connected topics, but is genuinely an extended conversation about a set of thematic concerns that weave the chapters together as a book. None of the chapters are intended as anything more than a philosophical contribution to the broader renewal and appreciation of liberal education. Individually, each of these chapters makes a unique contribution to some aspect of liberal education, while dove-tailing with, and elaborating upon, topics discussed in other chapters. Each contribution makes its own argument for liberal education in its own way, but the thematic threads that unite this collection into a whole are both real and substantial, and the book itself, composed in friendship and hope, is offered in the same spirit.

[1] Eric Voegelin, Anamnesis: On the Theory of History of Politics, in The Collected Works of Eric Voegelin, Volume 6, ed. David Walsh (Columbia: University of Missouri Press, 2002), 375.

James Greenaway is the Chair and Associate Professor of Philosophy and the Charles H. Miller M.D. Chair in Human Dignity at St. Mary's University in Texas. He is author of The Differentiation of Authority: The Medieval Turn toward Existence (Catholic University, 2012) and Belonging, Communion, and Being (Notre Dame, forthcoming).

Proust and the Truth of the Novel

The Crisis of Our Time: Revisiting Natural Right and History by Leo Strauss and the Critique of Historicism

Transcultural Writers and Novels in the Age of Global Mobility

The Face of Love: Beatrice as Type of Christ