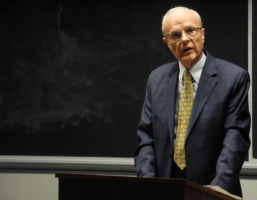 Why did you choose the path of the independent scholar as opposed to a university professor?

In 1975, when I was on the job market for my first college/university teaching appointment, a foundation in Iowa invited me to write a definitive, scholarly, and – as it turned out – multi-volume biography of Herbert Hoover. I was offered a full time contract that respected my academic freedom. This arrangement (which ultimately lasted twenty years) led me out of conventional academia and made me an “academic without portfolio” – a niche I have occupied ever since.

I do not know enough independent scholars to generalize. I do know that some conservative scholars have ended up in think tanks as refugees, as it were, from liberal academia.

What have you found most advantageous about being an independent scholar?

Independence: freedom to pursue my professional interests without irritating pressure from academic bureaucracy, faddishness, and groupthink.

What has been most challenging about your career path?

The need to make a living without the usual institutional support (e.g., tenure); also, the need to create one’s own social and professional network. Fortunately, I live in a region with many nearby academic institutions where I have friends and access to research facilities. And ISI over the years has become a congenial “alternative university.”

You were raised, educated, and have written about Massachusetts, not a particularly conservative state. How do you account for being conservative?

My New England Yankee parents were politically and culturally conservative and taught me to be “inner-directed” rather than “other-directed.” Around the age of eleven, I became interested in World War II, the Cold War, and current politics, and in ensuing years discovered more and more conservative literature. In high school (as a member of the debating team), in college, and in graduate school, my upbringing and grounding in conservative writings helped me to resist the leftist conformism and temptations of the Sixties.

Which state or place in the United States do you think best represents conservative values?

Of the places with which I’ve become acquainted, the Big Sky Country-especially Wyoming, which I have visited often-seems to exemplify still the spirit of freedom, self-reliance, and common sense realism that conservatives cherish. And the Grand Rapids, Michigan area, which I have seen something of in recent years, seems unusually influenced by a fusion of entrepreneurial drive, philanthropic voluntarism, and faith-based, social conservatism. I have the same impression of the area around Charlotte, North Carolina, where I have been a few times.

I am not sure; it is one thing to “understand” something verbally, another to understand it inwardly and intuitively.  If there is to be another Reagan, he or she will need to recognize (as Reagan did) that American conservatism is not univocal but a coalition of many diverse strands of thought and protest. And then he or she will need to represent this fact, not just in plausible words and contrived gestures but with ecumenical authenticity, which Reagan possessed.

Of the presidential libraries you have visited, at which one did you find the staff most helpful and friendly?

Archivists and librarians are the unsung facilitators of scholarship, and I have benefited greatly from their help and courtesies wherever I have traveled. But the presidential library where my personal friendships and professional ties are strongest is the Herbert Hoover Presidential Library in West, Branch, Iowa. I have happily drawn upon its resources–and have been aided by its splendid staff–for nearly 35 years!

What do you think about the future of libraries in this country?

I suspect that libraries will become increasingly important not as as repositories of books but as holders of databases. I do hope libraries manage to flourish the old-fashioned way. We can search online all we want to, and often to great effect, but nothing has quite replaced the ambience and usefulness of open stacks.

What book(s) would you recommend young teachers to read?

As a historian, I have always been struck by the fact that historical scholarship, especially biography, is fundamentally detective work and that (in B.H. Liddell Hart’s words) “nothing can deceive like a document.” So if you are a historian, I recommend two books that will, I think, appeal to you: 1) Hugh Trevor-Roper, Hermit of Peking: The Hidden Life of Sir Edmund Backhouse, and 2) for recreation, A. Conan Doyle’s Complete Sherlock Holmes.

What are some recent books you have read?

This interview was conducted on January 27, 2010 at the Intercollegiate Studies Institute.

Art as a Via Negativa: A Note on Larkin’s High Windows

Wonder Woman: A Movie About Men

Individualism Waning in the West

Servile Oblivion and the End of Education