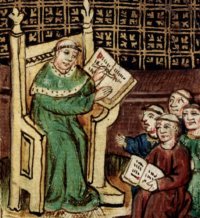 John of Salisbury not only depicts the thorough and balanced measure of the education of the ideal scholar, but he also points to the deficits within our modern educational system. Like his antagonist Cornificius and his followers, our educational culture of today appears shallow, showy, and in many ways, one-dimensional in its thinking. Many students see their education as a means to the job or prestige they desire and do not embrace their education as a lifelong preparation, a how-to for thinking.

Much misunderstanding of how to cultivate critical thinking and logic stems from this modern factory system wherein a student is one of thousands training en masse to get what he wants as his single goal. John of Salisbury would liken this culture to that of Cornificius’ thinking. Salisbury roundly tears into Cornificius’ ideas, exclaiming that “he undermines and uproots all liberal studies, assails the whole structure of philosophy, tears to shreds humanity’s social contract, and destroys the means of brotherly charity and reciprocal interchange of services.”[1] In The Metalogicon, Salisbury vigorously defends not only a way of study, but also a way of life as one pursues a liberal arts education.

For Salisbury, logic is his most valuable player. In Book II, he states, “Every branch of philosophy therefore has its own questions. But while each study is fortified by its own particular principles, logic is their common servant, and supplies them all with its ‘methods.’”[2] It is a tool for argumentation and also a skill to use in all learning throughout life. Since “logic is exercised in inquiry into the truth,“ its use can lead to wisdom and all its fruits as well.[3] This advantage lends to a lifestyle of learning, much more than most modern students could appreciate in the moment. Salisbury also points out that logic carries power, a force. By its proper use, it not only exercises our minds, but also can stir us and others to action. It is here that Salisbury advocates methods of learning, practicing our logic and reasoning skills.

Any modern learner can relate to Salisbury’s views on how to reason and how to choose and use his own words. Salisbury exclaims that he is “not interested in verbal hair-splitting”[4] or a legalistic way of addressing how to learn or interpret. To make his point, Salisbury cites the power of words as used by past philosophers and scholars. “Like a whirlwind, they [the words] snatch up those who are ignorant of them, and violently lash such persons about or dash them to the ground, stunning them with fear.”[5] But this isn’t mindless pathos. This isn’t being strung along by riotous speech or news bites. This is the truly effective use of all the rhetorical appeals where they are “veritable thunderbolts” of power. That’s why Salisbury encourages learners to use these arguments for their own proofs and refutations. Why waste time creating your own arguments or examples when the philosophers and scholars have done it for you? Salisbury’s unintimidating point here is that part of the learning practice is to use or mimic the greats because their reasoning and ideas bear “wide applicability.”[6]

Along with logic and reasoning, John of Salisbury persistently addresses the clear use of words and their force. Without clarity and context, we judge or misread in error: “The meaning of words should be carefully analyzed, and one should diligently ascertain the precise form of each and every term… that would otherwise obscure the truth.”[7] This is a step that many of us might ignore. If the reader or audience doesn’t understand wording and intent, they attack and argue, just like Salisbury’s opponent Cornificius, who “assails with bitter sarcasm the statements of everyone else… in the effort to establish his own views and overthrow the opinions of others.”[8] With these details, Salisbury points to those who are quick to argue, those who reflexively combat any idea with which they disagree. They use words as weapons of retaliation, evidencing the vice of impatience, a prevalent issue both then and now. Words then become meaningless without clear intent, and Salisbury’s ideal of force or power is neglected.

Salisbury further cites Aristotle’s standards for clear word choice and predication: “For they either deter or impede, or foster and expedite the work of those who are endeavoring to proceed.”[9] The motive behind word choice is distinctly black and white. This involves definition[10] and what Aristotle would describe as dividing words accurately.[11] We might call it understanding denotation, connotation, and context. Take, for instance, Salisbury’s investigation of the use of “true.”[12] An opinion is “true” if it reflects reality because it can be defined as a thing itself or its influence upon things. “A being is a true man if this being has true humanity… true ‘whiteness’ is that which makes white; true ‘justice’ is that which makes just.”[13] By examining and using a single word with care, misunderstanding can be avoided. But perhaps, most importantly in our day, an author’s meaning “should not be discarded by quibbling over a word.”[14] We are all guilty of jumping to conclusions, but to glean a truth from an author or speaker when he does misspeak or misuse words requires a mature learner.

For those who bemoan the plight of our contemporary educational system, let them take heart in Salisbury’s admonitions and advice. Salisbury did not allow misinterpretation of himself or his words because he countered Cornificius directly in person and offensively in writing. His legacy of The Metalogicon exemplifies a practice that we must champion to change our learning systems—to address the failings directly and to see that one educator can transform the world in which he teaches. Salisbury’s learning philosophy can become our own as we advocate a conscious effort in ourselves and our students, by which a student is both trained and trains himself to analyze how words are used and how he himself reasons. For “Reason, the mother, nurse, and guardian of knowledge, as well as of virtue, frequently conceives from speech, and by this same means, bears more abundant and richer fruit.”[15]

This was originally published with the same title in The Imaginative Conservative on November 28, 2018.

The Illogicality of Determinism – Further Considerations