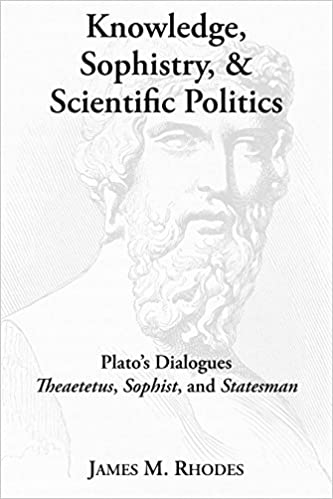 Rhodes wants to see whether Plato’s Statesman can “teach us noble and useful things about politics” (1). To accomplish this, he looks at the three Platonic dialogues – Theaetetus, Sophist, Statesman – and interprets them according to the rules that Plato himself wrote about the nature and form of writing. According to Rhodes, one should interpret the dialogues not as philosophical doctrines or theories but as existential searches for the truth whose findings are ineffable and thereby only can be pointed to or partially conveyed by language. We therefore should follow the logic of the dialogues as closely as possible to guide us to aporia. From this, Rhodes believe that the Platonic dialogues have different purposes which he classifies “entirely aporetic,” “refuting implicitly aporetic,” “reasoned implicitly aporetic,” and “apparently dogmatic” (8-12).

The other rules that Rhodes adopt for interpreting Plato are to recognize the importance of the dramatic structure of the dialogue (13), to select the interpretation that is most compatible with the dialogue’s logic and dramatic setting (14-15), and to avoid exegeses based on the dates of the dialogues (15). Or, as he summarizes at the start of chapter two:

“If the rules for reading Plato are correct, students of his dialogues have five tasks. They must get the logic of the arguments and the meanings of the myths right. They must determine how the reasoning is valid and invalid and allow themselves to be plunged into bafflement. They must get the action of the plays and the characters of their personae right. They must understand the logic of the arguments in light of the drama. Conversely they must interpret the drama in light of the logic. They must do all that in hope that Plato’s flashes of leaping flame will come to them, or that Socrates’ god will permit their souls to bring forth fair things” (22).

Rhodes treat the Theaetetus, Sophist, and Statesman as a single drama and are also connected with Euthyphro, Apology, Crito, and Phaedo. In the second chapter, Rhodes gives a summary of each dialogue following his own interpretative rules. He concludes that these dialogues ultimately are studies 1) to illuminate the scientific, religious, political, and philosophical causes of Athens’ debacle and Socrates’ death; 2) to describe Socrates’ ascent from death to eternal life; and 3) for Plato to mediate on his own mythical and spiritual voyage inside the soul of Socrates.

In chapter three, Rhodes explores the possible answers to Socrates’ question, “What is knowledge?” in the Theaetetus: materialism, immaterialism, an operation of the mind, or a condition of the soul that is aware of logic and evidence. After exhaustingly examining each option, Rhodes concludes there is no reason to prefer any one answer over the other, suggesting that Plato wanted to show that those who claim to know are those who do not know. Rhodes’ analysis also shows how the logic of the dialogue corresponds to its dramatic setting. The Theaetetus is not Plato’s failed attempt to understand knowledge which he later will works out in the Sophist and Statesman; rather, it is to illuminate the limitations of scientific knowledge and how this was a remote cause for the fall of Athens and execution of Socrates.

In the next chapter, Rhodes’ continues his analysis with the Sophist by departing from analyses by Eva Brann, Stanley Rosen, Seth Benardete, Kenneth Sayre, and Kenneth Dorter. According to Rhodes, the stranger’s diaeresis (dividing one concept into sub-concepts until a desired definition is reached) is rhetorical rather than philosophical. Furthermore, the stranger’s account of the soul is defective because it neglects reason ruling thymos and desire and it ignores the link between vice and ignorance. Rather than equating the noble sophist with Socrates, the stranger is pointing out that Socrates is conducting elegchos (the search for evidence or proof) the wrong way and therefore is producing wrong outcomes. The stranger is the noble sophist while Socrates is the wolf who only looks like the noble sophist, the “beast against whom we must stand on guard, meaning the whole point of the diakritiken diaresis seems to have been to negate the malignant effect that Socrates had on Theaetetus yesterday” (209). Although the stranger’s argument is philosophically inadequate, it is rhetorical successful in pinning the label of sophistry to Socrates.

Rhodes continues his analysis of the Sophist in chapter five by exploring the dialogue’s “logical metaphysics” (213). In the dialogue, the stranger has developed several definitions of the sophist: a disputer, one who teaches the art of disputation, one who pretends to know all things, a type of wizard who enchants his students, one who claims to make all things, one who create word images of originals to deceive the youth, one who forsakes the original only to make beautiful copies, one who defends himself against the charge that he is an image-maker. These various accounts point to a metaphysics of “nonbeing” meaning “not being that” (261) rather than “nihil absolutum. Thus, “the interpretation of nonbeing as otherness has come as a letdown. As an ontological theory, it is unimpressive” (261). Rhodes consequently concludes that the Sophist is not a triumph of Platonic logic and metaphysics, as some interpreters have claimed, but instead is an exercise of equivocation and obfuscation.

In the last two chapters, Rhodes examines the Statesman (or, as he calls it, Politikos) and argues, contrary to accepted interpretation, that Socrates is among enemies rather than friends in this dialogue. Theodorus has recruited the stranger to prosecute Socrates and is representative of the political class who will later judge Socrates guilty and sentence him to death. In the exchange between Socrates and the stranger, the myth of the ancient gods is presented to save the logos from shame. In this myth, we can draw the lessons that reality is in constant flux, the gods are irrelevant to humans, and human beings are weak and most are incapable of philosophy. From this and the subsequent exchange between Socrates and the stranger, Rhodes believes that the stranger is not engaged in a Socratic enterprise because he confuses science (episteme) with wisdom (Sophia) and equates statesmanship with tyranny. The stranger’s account of politics as weaving therefore rests on unSocratic premises.

Knowledge, Sophistry, & Scientific Politics is a mastery account of Plato’s Theaetetus, Sophist, and Statesman that presents a unique interpretation of these dialogues while at the same time navigate the scholarly literature. As part of the seven-dialogue drama about the life and death of Socrates, Theaetetus, Sophist, and Statesman can be understood in a new and original light. Even if one is not persuaded by Rhodes’ analysis of the dialogues, he offers a fresh way to understand and interpret Plato. It is tragic that his life was cut short too soon before he could complete his project, but Knowledge, Sophistry, & Scientific Politics points us into a new direction in Platonic scholarship that hopefully will inspire future scholars to continue Rhodes’ good work.

Why Liberals and Conservatives Will Never, Ever Agree

The Soviet Union of 1944–1991 in the Historiography: Representation of a Polyethnic Political Society

The Soul of Statesmanship: Shakespeare on Nature, Virtue, and Political Wisdom