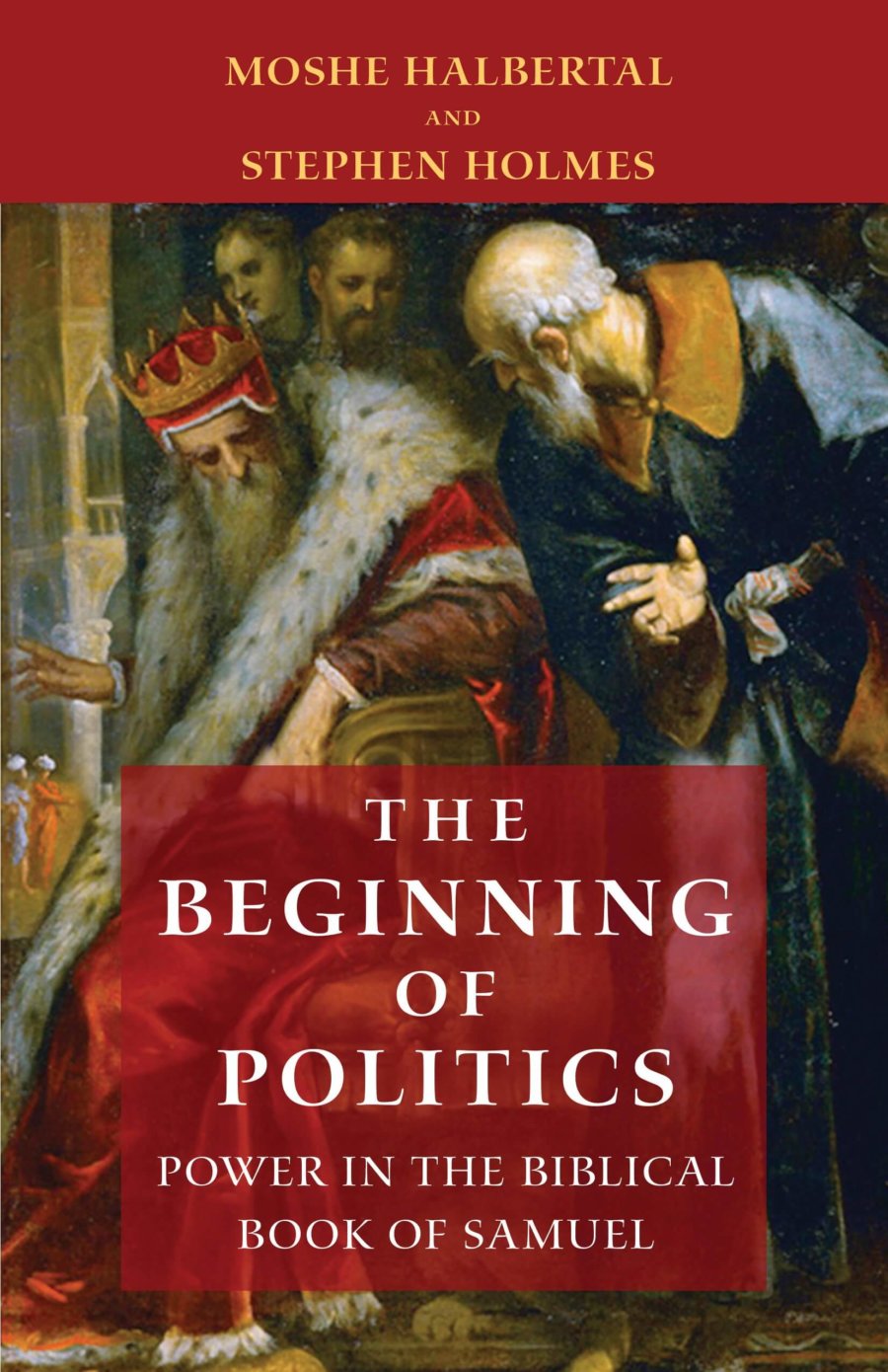 The Beginning of Politics: Power in the Biblical Book of Samuel. Moshe Halbertal and Stephen Holmes. Princeton: Princeton University Press, 2017.

Despite the contemporary trend to exorcise any and all religious sentiments from the public sphere, it remains an unavoidable reality that religious belief plays a significant role in how we understand politics. Religion attempts to provide a blueprint for humanity’s relationships amongst both itself and more importantly, the divine, and in doing so becomes an integral aspect of culture. Moral obligations between fellow human beings are established as an aspect of the overarching theological relationship between man and God. Because religion defines these ethical commitments as real and eternal truths, it is impossible for the serious believer to suspend them while engaging in public life. As such, when engaging in a serious study of political theory scholars would do well to look for the origins of political ideas in religious texts. In doing so, it is important to read them as fundamentally religious in nature, primarily concerned with making theological claims. Any political observations and theories that can be derived from these texts are entirely dependent upon the theology presented therein. These theories and observations become baseless in the absence of an overarching divine connection.

Moshe Halbertal and Stephen Holmes recognize the possibility that religious texts may articulate political truths, but fail to recognize their primarily theological nature. Their goal in The Beginning of Politics is presumably to show that the Author of the book of Samuel writes not a work of theology, but rather an astute observation of politics.[i] In doing so, Halbertal and Holmes claim that the Author does not defend any particular ideological position, nor does he present a theory of his own. Instead, Halbertal and Holmes maintain that the work is purely one of observation, albeit one that perceives and articulates certain political truths. According to Halbertal and Holmes, the key recognition made in this text is that “Whenever retaining hold on high office, rather than realizing an ideological vision or implementing a political program, becomes the dominant aim of politics, sovereign power becomes for its wielder an end in itself…”[ii] Throughout the book therefore, Halbertal and Holmes painstakingly analyze every action taken by Saul, David, and David’s children, in an effort to demonstrate how their actions are intentionally portrayed by the Author as being attempts to turn “intrinsically worthy ends” into “disposable means,” so as to maintain their political power.[iii]

Halbertal and Holmes’ understanding of Samuel paints both David and Saul as shrewd Machiavellians, who upon achieving sovereign power, are almost immediately corrupted by it, and become willing to employ any means necessary to retain that power when it is threatened, including violence and the unscrupulous abuse of religion. God is himself almost entirely absent from Halbertal and Holmes’ interpretation of Samuel. They declare that by granting the Hebrew people’s request for a King, God “renounced his exclusive supremacy in the political domain,” and in doing so, extricated himself from any further involvement in Israel’s political affairs.[iv] God therefore, becomes merely an observer of Israel’s political affairs, with Halbertal and Holmes presenting any acts of divine intervention in the political as passive, with God passing judgement but leaving the fulfillment of that judgement entirely in the hands of human actors.[v]

Halbertal and Holmes’ central contention therefore, is that the book of Samuel observes a world in which politics necessarily involves the sublimation of all things to the end of preserving sovereign power. The vision of politics herein presented is not so much characterized by a surrounding violence as it is itself intrinsically violent. Referring to an “inversion” of sovereign power from a means of “repelling foreign conquest and attaining other collective goods,” to an end in and of itself, the authors declare that all other “worthy ends” are consequently sublimated to the end of maintaining sovereign power.[vi] Indeed, Halbertal and Holmes make only halfhearted attempts to suggest that politics can be anything other than a series of violent attempts to achieve or maintain sovereign power. By stating that sovereign power becomes an end to itself only when “retaining hold of high office… becomes the dominant aim of politics” Halbertal and Holmes hope to absolve themselves of the accusation that they ascribe authoritative claims about the nature of politics to the Author of Samuel. This is of course undermined by the fact that far from being a rare occurrence, the inversion of sovereign power is constructed as essentially inevitable. Without exception, all actors within the narrative who obtain power of any kind understand their power as an end that must be preserved at all costs. Not even David, a man supposedly after God’s “own heart,” is capable of resisting the allure of sovereignty.[vii] The political theory that Halbertal and Holmes derive from their reading of Samuel is one in which politics cannot be understood as a means to truly advance the common weal. Any good that results from political action is collateral to the maintenance of sovereign power, and thus political order is framed as an extremely unlikely means to advance public virtue.

Halbertal and Holmes’ presentation Samuel’s Author as a sort of proto-Machiavellian figure implicitly de-legitimizes all theological readings of the text. The sentiments ascribed to the Author seem to more closely mirror those of 19th century political scientist Max Weber, who declared that “whoever becomes involved with politics… has made a pact with satanic powers.”[viii] Indeed, such a dismal view of the nature of politics cannot coexist alongside serious religious convictions. Any attempt to reconcile religion and politics from this point of view inevitably results in the total separation of the religious and political spheres. Separation of this sort undermines the legitimacy of the truth claims made by religion and reduces religion to little more than a quaint set of inconsequential private beliefs. While such a view of religion may be commonplace now, it is particularly difficult to justify the idea that it was held by any Jew of the ancient world.

Hebrew national identity was inseparable from their religious self-understanding, in a very real sense, their religion was their political theory. This idea persisted despite the fact that the institution of the monarchy was undoubtedly a deviation from established religious tradition. Indeed, what began as a deviation from tradition quickly became the context for a renewal of Israel’s political and spiritual reliance on God. Through the prophet Nathan, God declares that the source of David’s power is not his political acumen, but rather the unambiguous result of God’s own will.[ix] What follows this is a series of promises made by God to David that, by virtue of David’s political position, extend to encompass the whole people of Israel.[x] Thus, the establishment of the monarchy does not indicate the origination of a strict demarcation between the public and private spheres, but rather serves to reframe but still emphasize the integration of religion and public life present in Israel.

It would of course be absurd to say that there is no merit to the observations made in this book. The ability of sovereign power to corrupt the motives of those who hold it is well documented. Furthermore, even the most generous reader of the text cannot help but to identify a certain level of political maneuvering by David and his court. To assert that politics in and of itself is only indirectly capable of good however, is a gross overstatement. As Aristotle says, “every community is established for the sake of some good,” and that the political community possesses the “most authority” precisely because it is established for the purpose of achieving a higher good.[xi] To eschew the idea that politics is capable of good at all is not realism, but pessimism. A proper political theory of power must understand its tendency toward corruption alongside its natural ordering toward the common good. To focus only on the potential evil of politics is to invite the calamity of a self-fulfilling prophecy.

[i] Moshe Halbertal and Stephen Holmes, The Beginning of Politics: Power in the Biblical Book of Samuel (Princeton: Princeton University Press, 2017), p.3.

[v] Although a motif throughout the book, Halbertal and Holmes’ presentation of God’s passivity is exemplified in their account of David’s rise to the throne found in pages 28-66. While God is the one who ultimately declares Saul unfit for the throne and chooses David as a replacement, David’s rise to power is presented as the sole result of his own cunning and ambition. After selecting David as Saul’s replacement, God once again vanishes from Halbertal and Holmes’ narrative.

Joseph Natali is a graduate of Saint Vincent College in Politics and History. He is currently a faculty member at Chandler Preparatory Academy, a classical charter school in Arizona, teaching 12th grade Humane Letters and 11th grade Economics.

Rocky: Boxing and the Meaning of Life

When One Sex Attacks The Other, Both Lose

The Wisdom of Lyric: Deryn Rees-Jones

Learning to Love Again: Dante’s Descent in the “Inferno”