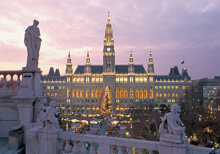 In Banes, a hole-in-the-wall along Köllnerhofgasse and only a block from my flat, I see people meeting for drinks every evening.  Some of them  appear to be rather disgruntled government servants and others have a manic-depressive aura about them.  It is there that I can almost feel the darkness of spirit of which the early 20th century Austrian writers wrote. It is not merely something seasonal that comes with the early dusk that in winter descends on the city; it is something that wells up from an ever present source.

There are of course many Austrian writers waiting to be read. I’ve in fact had an opportunity to pick and choose among them, in no particular order, and I agree with those who say there seems to be a pervasive gloominess and, some would say, morbidity,  in their manner of writing, a gloominess that in fact preceded the crumbling of the Austro-Hungarian Empire.

Consider Franz Grillparzer (1791-1872), author of Der arme Spielmann (The Poor Musician, 1848), for example. A famed dramatic poet and playwright, unhappiness seemed to mark both his public and personal life. Grillparzer is variously described as brooding, pessimistic, often times bitter–“making him peculiarly adapted to express the mood of Austria in the epoch of intellectual thralldom that lay between the Napoleonic wars and the Revolutions of 1848.” In general, critic William Johnston notes that Grillparzer’s plays “depicted death as a great reconciler.”FN In other words, in the 19th century Austrian world of rigid social and class distinctions, it was understood that hierarchy ruled the world. The response to this was renunciation, resignation and the occasional fascination with death and the afterlife that, to this day, is considered a hallmark of the Austrian mind.

I’ve also read the gripping novella, Sterben (Dying, 1895), by Arthur Schnitzler (1862-1931), the son of Hungarians who grew up in Vienna. The book tells of a rich young man, Felix, who is dying of an unknown disease. He cruelly pressures his fiancée, Marie, to fulfill her impulsive promise to end her life upon his death, while she increasingly has her doubts. It is a dark book full of despair and bitterness. It is no surprise that Johnston calls him one of the most celebrated “poets of death” as many of his works focus on or explore how death “assuages the wounds of the living.”

Then there is Hugo von Hofmannsthal (1874-1929) who wrote Andreas, Oder die Vereinigten (Andreas, or, The United, 1932), a moving but unfinished novel about a young Austrian nobleman who embarks on his Grand Tour and picks up an unsavory man-servant along the way who corrupts Andreas’s first experiences. Much of the story takes place in dark alleys along the canals in Venice and there are mystifying encounters with a Knight of Malta as well as with women of both high and ill repute. It is a story of the loss of innocence and the corruption of the idea of noble love. The end of the novel is a frustrating collection of notes, fragments, thoughts and ideas of how the story would have ended.

Hofmannsthal is particularly interesting because in addition to being a poet, novelist and librettist, he was one of composer Richard Strauss’s first collaborators, working on the librettos for Der Rosenkavalier and Ariadne auf Naxos, among others.  And I was understandably pleased to read that Princeton University Press has published an anthology of Hofmannsthal’s poetry, short stories and essays, The Whole Difference: Selected Writings of Hugo von Hofmannsthal, edited and translated by J. D. McClatchy. The book includes both new translations and other works long out of print.

Authors like Hofmannsthal and Stefan Zweig are said to have written many of their works while sitting at one of the many famed Vienna cafés in the city. Sometimes, the cafés even served as the primary mailing address for the writers who spent their days there. Young authors and bohemian poets would meet, for example, at Café Griensteidel at Michaelerplatz (next to the magnificent Hofburg palace). It was there that a young Hofmannsthal met with Schnitzler, Zweig and others–and where many of them began or developed an education in aesthetics. In my own visits to these cafés, I have  looked for their contemporary equivalents; if they are there, I don’t see them. Sadly, one gets the feeling that there is no longer a Wiener Kreis like before–perhaps a casualty of the Modern Age. Perhaps that is why it is so comforting to disappear into the pages of these turn-of-the century books.

There were other interesting writers born or educated in Vienna. Three in particular–because of their role in the development of modern literature and their contributions to philosophical discourse–are of special interest: Robert Musil (1880-1942), Hermann Broch (1886-1951) and Heimito von Doderer (1896-1966). They wrote about people who escaped unbearable existences by constructing for themselves “secondary realities.” These are complex and oftentimes hallucinatory works that were examined by Eric Voegelin when he developed his analysis of the modern spiritual crisis.

Alvino-Mario Fantini is a financial journalist, who was formerly with the World Bank.

There was a Boy They Called Hillaire