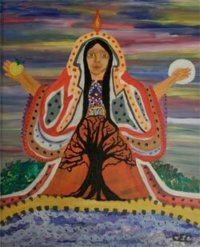 This short, informal bit of writing is inspired by a former high school student of mine who has, for the last number of years, devoted her working life to improving the lives of other women in the city of Calgary. Sarah Winstanley approached me a number of years ago asking me if I might write something for her feminist ezine about the connections between feminism and “environmental issues.” Now, I’m certainly not an expert on either of these things; however, I feel some spiritual resonance and personal affinity with both the deep, mysterious feminine aspect in things and the living world. I think many people do; but despite that fact, the world is in a shambles. We’ve really botched things, and it doesn’t look like there will be any improvement any time soon. We lack the wisdom to know what to do or how to live. In mass, western society, we’ve come to suppose that we can “save ourselves” through science and ever-new technologies – that our techniques and know-how will save us from ourselves in the end. This is folly.

I think it is very true that our loves dictate how we live in the world. Clearly enough, our loves and our manner of loving can be quite disordered. Just take a look around you. Take a look inside you. Insight into the depths is required; following the ancient inscription at the temple of the Delphic Oracle, each of us is commanded to “Know thyself!” There must be a seeing (what the ancient Greeks called theoria) into the depths of things, right to the core, in order for wisdom to emerge. I’m going to tell you a little bit about that as someone who has reasonable familiarity with the world’s ancient and medieval philosophic and religious traditions. I want to speak with you in this short meditation about how insight into the deep feminine ground of things can inform the way that we live and in the world and hence, how we relate with our environment.

The Greek word for wisdom is Sophia, and she is a goddess. That is to say: wisdom is not a human quality, but a characteristic of the god. As Pythagoras long ago told us, “The god alone is wise.” Mortals, or human beings, are certainly not wise; or rather, the only way to become wise is to die to one’s mortal, finite self – to leave the ego behind. Most of us think we “know ourselves” by knowing this ego that we hear and feel and nurture all day long. When we ask kids in school to “know themselves,” mostly we’re asking them to identify what they like and dislike, their strengths and weaknesses, as well as what they aspire towards. But this is the false, fluctuating “self” that masquerades as the true self. And mostly, the ego does so with great bravado and self-importance; in fact, even when it is crying to us about its lack of self-esteem, telling us of its pain and its deep wounds, or about its neglect, still… it speaks in such a way as to re-inforce its supposed reality to us. Our psycho-mental identity is full of intensity, feeling and emotion; it is noisy and clamouring with thoughts and ideas, streams of consciousness and chains of reasoning, sensations, imaginations, anger, lust, fear, ambition. Moreover, it is the ego that drives our economies. It is the ego that achieves great things and great deeds. It is this self-same ego that transforms and masters the world through science and technology, attempting to save itself from itself and its follies. But thou art not this.

So what is That? Folks who seek for That are engaging in something quite strange and misunderstood. They are looking for the Source of this yearning they have intimated deep within themselves – this yearning that pulls them beyond all these myriad things and the psycho-mental flux. Sometimes we find ourselves tugged in this way when we read a book or listen to music. Sometimes we feel the pull during a quiet evening stroll through the streets, or sitting in stillness on a park bench by the river. Maybe we glimpse it in another’s eye or feel it in their embrace. Maybe it is in a baby’s coos, in an old man’s wrinkled skin and hunched back, or in a dog’s smile. Some of us find ourselves face-to-face with it in the cold dead of winter, in the sparkle of ice and snow. And now, summer being on its way, probably many more of us will be set on its trail from time to time as we leave the cities to venture forth towards the mountains, to the lakes and streams, valleys and forests, called as we are to seek for That. This is how we relate to Wisdom’s pursuit.

But She is elusive! She does not show herself to us at our request simply because we go looking, or through being mastered. She responds to none of our entreaties or techniques at forcing her to reveal herself. Since at least the time of Francis Bacon, we have grown adept at “putting Nature to the rack and forcing her to answer our questions.” Indeed, it is curious how our “Enlightened” manner of knowing the deepest things is couched in the language of rape and torture. But never mind that. Nature seems always to have the last laugh when we approach her in this muscular and violent fashion. Her responses have been much like the Oracular riddles recounted by Herodotus in his Histories.

When Croesus, the ancient king of Lydia decided, in all his masculine pride, that he would challenge the Great King of Persia upon the battlefield, he sent embassies with lavish gifts to the Delphic Oracle in order to ask the priestess there for guidance about the success of his campaign. The Oracle responded: “If you do battle, a great kingdom will fall.” Led on by his own pride (what the Greeks called hubris), Croesus went into battle, not realizing that the great kingdom to fall would be his own.

This tale of ancient folly is as true now as ever it was in days of old. Like the foolish Croesus, we have grown great, wealthy, and powerful. Just as Croesus consulted the priestess of Apollo in order to feed his great ambitions, we likewise have put Nature to the rack. Fascinated by our own great powers over her, we receive her answers to our questions. But Nature’s responses, like those of the Oracle, will remain equally cryptic to all those lacking wisdom. Although we may suppose that our great powers have enabled us to force Nature to appear naked before our leering eyes, in fact, she has only shown us what we thought we wanted to see, not what actually IS. As Heraclitus long ago remarked: “Nature loves to hide.” Not knowing the truly deep things (but only supposing we do from her responses) and deluded by hubris, we are led towards our own downfall.

So how do we come into this true seeing if we cannot take it by the force, or by the steadfast manly exertion of our will? Only by dying to our mortal aspect (and for this reason, Plato has Socrates call philosophy “the art of dying”) are we able to find that immortal aspect that lies within each and every one of us. This is the goddess. And this is also the manner of our participation in Wisdom . . . except, of course, there is no you or I, or even a we that participates; indeed, inasmuch as we are wise, “we” have ceased to be, and what remains is That: the goddess herself who is beyond all time and fluctuation, all distinction and limitation.

Attempting to live as devoted “lovers of Sophia” or philosophoi is a difficult and uncertain business. There are not many great ego-payoffs and it requires moment-to-moment attention, but it is deeply transformative. If we take up wisdom-seeking not just as though it were an intellectual curiosity, or as if it were an abstract “subject of study” in which we might earn a degree, but rather as a “way of life,” then its spirit might slowly, slowly transform us.

However, I must warn you about what all the ancient wisdom literature tells us concerning the love of Sophia: it’s not all rainbows and unicorns. People who tell you that are lying, and if you are “loving wisdom” but at the same time winning awards and receiving accolades and praise, chances are you’re not doing it correctly! Loving wisdom led to Socrates’ execution and Christ’s crucifixion, after all. You can likewise think of many other incidents of assassinations, persecutions, and untimely deaths throughout history involving wisdom’s lovers. Loving wisdom will not make you popular or well-esteemed in the eyes of others. It always involves marginalization. Indeed, Lao Tzu tells us that all those who seek the Way will look ridiculous in the eyes of others, just like the tales about Thales falling into the well, or St. Thomas Aquinas who was known by his brothers in the monastery as “the dumb ox.” Idries Shaw likewise speaks of the great Sufi tradition as having at its centre the “wisdom of the Idiots.”

Why? It is because Sophia’s lovers seek a good that looks like nothing in the eyes of others who claim to know. Lovers of wisdom pass by all the other finite, mitigated goods lauded and sought after by the mass of humanity. They seek for something that is really “no-thing,” which makes them look stupid. They speak, too, but only in order to draw nearer though speech to the One whose name cannot rightly be spoken; and they seek after a good the possession of which might never be achieved.

The urgency of accomplishment in all other things held in high regard by their peers has fallen away in Sophia’s lovers, who always appear useless and foolhardy; their questions and wondering seem besides-the-point and quarrelsome; their queries impede our “progress” in all other things, as they question us about the core things we suppose to be true, including our own oh-so-serious and easily-offended estimations of ourselves and our understanding. Philosophy is not pretty. Witness Socrates’ own ugly visage. Hence, too, the main reason why loving Sophia will never be popular, and why there will always be such enormous folly and mass confusion in the world, including around “environmental issues.”

In closing, I put these questions to you as readers who are interested in the relationship between feminism and “environmental issues”: What is at the core of your “feminism”? What “self-knowledge” informs it? Certainly male chauvinism breeds delusion; but how will you free your feminism from delusion? How will you relate your feminist concerns to the pursuit of Sophia — that grand, transcendent feminine principle that loves to hide from prying eyes and that is forever untouched by male violence? And when you think about “environmental issues,” how will you do so while, at the same time, practicing genuine philosophy as “the art of dying,” so that your environmentalism is informed not simply by science and technology (which are no guides on their own) but rather by the spirit of the goddess?

The Truth about Plato’s “Noble Lie”

Statesmanship and the Dangers of Civil Religion