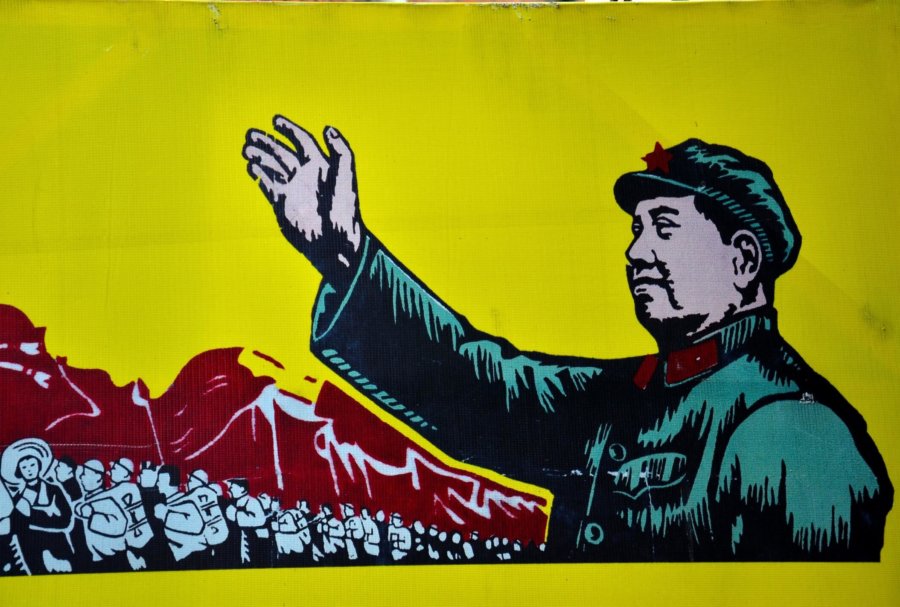 From “deplorables” to “enemies of the people”—this is a trajectory with which we Chinese are all too familiar. Demonizing your political opponents is not an end in itself but merely the first step toward knocking them down and then subjugating them. Yes, the “Scarlet Letter” of early American culture has returned to American society, and the United States is becoming all too like totalitarian China.

The second impeachment of Donald Trump was a calculated tactic, serving multiple purposes. The real point was not to remove a lame-duck president from office. The plot was even more pernicious than preventing him from seeking the presidency again or stripping his Secret Service protection. The deeper purpose was to instill in future generations a general pattern of thinking that Donald Trump is the “people’s enemy” and that anyone associated with him is equally diabolical. It is propaganda of the Soviet style. Soviets distinguished between propaganda and agitation. The former “is restricted to a more refined, rational, documented appeal, designed to convince rather than to induce” (in Carl J. Friedrich’s words). So, it is not—as some commenters think—a fanatical hatred for Mr. Trump that drove the House to hang a man who is about to die the next day anyway.

It can be done since the Machiavellians in this country have a near monopoly over the “Ministry of Truth.” It has been done before. I grew up in China learning about the barbaric “crimes” that Kuomintang committed against the Chinese people, according to our official history textbook. An old Chinese proverb says, “Let your enemy stink for ten thousand years.” This is a tactic Mao mastered in all the political purges and mass movements he engineered.

Having lived through three decades in China on Maoist propaganda and brainwashing, I was thrilled to attend university in the United States and expected to learn how to think within a beautiful tradition of liberal education. Heirs of classical liberalism have been thus accustomed to a political life that involves arguing with your political opponents, competing with them through reason, and reaching a decision by persuasion. I wonder what it would take for them to realize that their totalitarian opponents have no interest in discourse but sheer conformity and obedience. Facts and truth aren’t just irrelevant to totalitarians. They are hated by them.

Totalitarians, be they left or right, strive for all-inclusive domination over society and politics, thorough control of all fields of man’s life, limitless governmental interference, and the acceptance by all citizens of official doctrine and the government’s infallible authority. The main means to a totalitarian dictatorship are, as history has taught us, propaganda and terror. We are witnessing both these days in the United States.

Insurrection! So declared the corporate media and Big Tech Machiavellians. I was not surprised at all to hear that many of them compared the Capitol incursion to Pearl Harbor or 9/11—malicious rhetoric that some may find a flagrant insult to their intelligence and others a satisfactory tickling of their indignation and hatred for the “other.” Skillful agitators know how to weaponize crises.

In the immediate aftermath of January 6, we have seen all the tools of propaganda and terror at work: radical proposals to expel Congressmen who objected to the Electoral College certification; unhinged calls to imprison Trump supporters and put their children in “re-education” camps; melodramatic comparison of Senators to Nazi propagandist Joseph Goebbels; massive censoring of dissent and video evidence regarding election fraud and the Capitol incident, which contradicted or exposed the propaganda produced by the “Ministry of Truth”; merciless purges of conservative or libertarian intellectuals, journalists, and grassroots movements from Facebook and Twitter; and the cancelling of protesters from airlines and financial platforms. The list goes on and will surely continue to grow.

The totalitarian elites and their adherents are cheering and demanding even more repression. They are branding the opposition not simply as “terrorists,” but “white supremacist” terrorists. The left never lets slip an opportunity to divide.

Some conservatives have attempted to expose the blatant hypocrisy of the left who, in the summer, instigated and even funded BLM and Antifa mob violence and who glorified property damage, looting, rioting, and the beating of police as the understandable expression of the “voices of the unheard.” Yet now those same voices label those who rampaged at the Capitol as terrorists who attempted a “coup” and were guilty of “treason.” These are the same people who, in the first decades of this century, objected to draconian state actions on behalf of the War on Terror as grossly eroding civil liberties.

But attempts to confront the totalitarians with their hypocrisy will eventually prove to be a fool’s errand. The totalitarian society of mocern China has taught me that when intoxicated by power, ruling elites are past all sense of shame. As long as the totalitarians control the networks of power—the mass communication apparatus, schools and academia, technology and finances—the court of morality holds no sway over their conscience.

Was the January 6th event really an “insurrection”? There was no leader, no weapons, no grand strategy, but merely an inflamed, disorderly crowd. How could a a group of hooligans, by any stretch of imagination, overthrow the most militarized government in the world?

But it was not 1776 either. In my eyes, it was the same sort of thing as China’s “mass incidents,” albeit on a much larger scale and of a greater magnitude. “Mass incidents” have occurred frequently in recent years and for varied reasons. One typical cause is when the local government seizes land from peasants without proper compensation. Pent-up anger over repression, corruption, and mostly, the injustice of the government, explodes when some catalyst ignites it. Then a group of agitated people march to the government headquarters, surrounding it and sometimes vandalizing the buildings until the police take control through beatings and arrests. Do not mistake such acts as political movements, as those actors have no agenda or leverage. The act is merely a grievance-venting—an outlet for Chinese who have been deprived by their government of justice and the means of seeking justice since 1949.

On January 6, I saw a similar sentiment permeating the Capitol Hill riot. I was saddened to see hundreds of Americans—their rational faculties impaired by intense feelings of grievance and anger, and most importantly, a profound loss of trust in governmental institutions, including the judiciary, which used to be the preserver of justice—laying futile siege to the Capitol.

But this event was extraordinary in that it shows how prescriptions that once prevented such action have now been breached, and the political structure that has sustained America for centuries will never be the same.

I watched hours upon hours of live streaming that day, moving around different channels to get more angles. When hearing some Americans say “I have nothing to lose,” I wonder why some citizens of a great republic felt so oppressed and bullied by their (supposedly) representative government that they seemed to have lost all hope and trust in their time-honored institutions. I fear the consequences when a number of people feel shut out from participating in the political institutions of their state. As the totalitarianism of Nazi Germany has taught us, when possessing no meaningful citizenship, politically naked individuals are vulnerable to the indoctrination of totalitarian ideologies.

Chinese like I are drawn to America not for the egalitarian promises touted by the American left. We (who experienced or learned real history) know too well that communist promises, as empty as they are, are but an effective tool to bribe, seduce, and mobilize the masses for the purpose of maintaining and expanding the power of the ruling elite; socialism is but a grandiose pretext for a combination of avarice and indolence. We Chinese have learned the lesson since 1949 that leftists do not care for the poor or the oppressed; they just hate the rich and powerful until they become the rich and powerful themselves.

So, we desire America for her founding principle: the protection of the individual from the tyranny of government. Much to their dismay, grey-haired Chinese Americans are now horrified to see the American government increasingly resembling the old tyranny from which they fled.

Few people in the West know the dystopian state depicted in George Orwell’s novel 1984 was a reality in Mao’s China. A case in point: By 1958, Mao had dissolved 120 million households and incorporated them into 26,425 People’s Communes. The Chinese People’s Communes have no parallel in modern history. It was a totalitarian rule true to its name. Mao intended the People’s Communes to be the fundamental unit of society that incorporated all activities of agriculture, industry, culture, education, commerce, and the military. When the People’s Communes movement rabidly swept across the nation, everything that had been private was now declared collective. All production means were expropriated. All Commune members were required to work in the collective farm with a quota on their labor that was much more demanding than quotas in the Russian kolkhoz. The farthest the Soviet communist experiment ever went was to bring the economy under the central control of the state, but in the Chinese People’s Communes, every facet of man’s life was dictated by a central order. Following the military trumpet, members worked, rested, and ate in unison.

The final and also the most radical practice was the annihilation of the family. Homes were confiscated; married couples were separated, and their intercourse was prohibited; children were taken away from their parents at birth and sent to public nurseries. They were no longer the mass man, but a whole other species—a cog in the wheel. When every iota of spontaneous human action is eradicated, thinking perishes, and in its replacement is a survival instinct, pure and simple.

Many have written about the threat to freedom of utopian thinking and totalitarian dictatorship, but I worry more about a spiritual disease that impoverishes civilization under such rule. Not only did Mao destroy the entire economy with grandiose communist projects such as the Great Leap Forward—which led to at least 36 million civilian deaths within 3 years—he also uprooted traditional ethics that, for thousands of years, regulated Chinese society with codes of conduct concerning right and wrong. Mao completely shattered interpersonal trust: the most crucial string that holds the social tapestry together. Mao’s incessant mass movements and political purges turned husbands against wives, made children snitch on parents, and force friends to denounce each other. Stripped of trust, friends, and family, naked Chinese felt impotent before the powerful state. Mendacity has become the common language and a resort for survival or success.

A survival instinct that has no slightest concern for morals but only calculation and manipulation reigns supreme over all fields of life. Chinese now work on expediency, not integrity. Truly, what Mao has bequeathed to the Chinese nation is the mores of “sophisters, economists, and calculators” (in Edmund Burke’s words).

Absolute power corrupts absolutely. It does not just corrupt great men who wield the power, but it also poisons the whole society. Decades of the practice of Maoism in China have shown that when the powerless masses act only upon fear—the most gripping and yet deadly passion of human hearts—civil society won’t survive. Many already know the totalitarian state takes away freedom, but they have yet to realize that it also destroys in humanity everything that is noble, decent, and ethical.

This was originally published in The Imaginative Conservative on March 10, 2021.

Habi Zhang is a doctoral student in Political Science at Purdue University. She holds a master's in public policy from Pepperdine University. Her main research interests are political thought, political culture, and quantitative methods. She is currently researching totalitarianism, political tolerance, and public opinion.