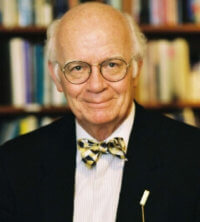 Minister, professor, administrator, and editor but probably best known as a cultural historian of modern Christianity, Martin has examined the intersection of religion and politics in America in several prominent works.  Ordained in 1952 as a pastor in the Missouri Synod of the Lutheran Church, Martin is also a distinguished emeritus professor at the University of Chicago, serves as senior editor for The Christian Century, founder of the Park Ridge Center for the Study of Health, Faith, and Ethics; and director for the Pew Charitable Trust’s Public Religion Project, the Academy of Arts and Sciences’ Fundamentalism Project, and the University of Chicago’s Martin Marty Center.  A receipt of the National Humanities Medal, National Book Award, and Medal of American Academy of Arts and Sciences, Martin has written over fifty books and 5,000 articles that range from personal reflections on the aspects of Christian faith to the problems and complexities required in sustaining a public moral discourse in a religiously pluralistic America.

Born on February 5, 1925 in West Point, Nebraska, Martin enrolled in 1942 at Concordia College in Milwaukee, Wisconsin as preparation for a ministerial vocation in the Lutheran Church.  He completed his seminary education in 1952 at Concordia in St. Louis, Missouri and was assigned to a suburb of Chicago, River Forest, instead of London, for disciplinary reasons of having invented a theologian as a hoax and published writing about him.  In 1956, Martin finished his doctorate, The Uses of Infidelity, at the University of Chicago, and has served parishes in the west and northwest suburbs of Chicago before joining the faculty at University of Chicago in 1963.  He married Elsa Schumacher in 1952, who died from brain cancer in 1981, and Harriet Julia Meyer in 1982, a long-time friend and widow of a college roommate.

The underlying theme for most of Martin’s writing is the public role of religion in the politics and culture of America.  In Righteousness Empire: The Protestant Experience in America (1970), Martin traces the attempt of white, English-speaking Protestants to create a virtual empire of beliefs and values in America, only to fail when confronted with internal divisions and external events such as immigration, urbanization, and intellectual secularism; in Pilgrims in Their Own Land (1984), Martin examines the role of public religion in providing a stable, moral framework for the American state; and in his three-volume Modern American Religions (1986, 1991, 1996), he examines the political consequences – immigration restriction, labor relations, government welfare, pacifism – of sectarian disagreement of “core-culture” Protestantism in America.  Martin seeks to dispel both totalist and tribalist thinking in America – the former seeks to impose a national identity to the exclusion of cultural difference; the latter favors cultural absolutism at the expense of a national narrative – as articulated in The One and the Many: America’s Struggle for the Common Good (1997).  In these and other works, Martin advocates a greater openness to religion in both politics and education, believing that religious values and perspectives would enrich the public dialogue between secular and religious ideas, movements, and institutions in America.

Zoba, Wendy Murray. “A Sense of Place.”  Profile in The Christian Century (October 2002).

The Things of God and Man: The Paradox of Consciousness in Cormac McCarthy’s Border Trilogy

In Defense of the Humanities