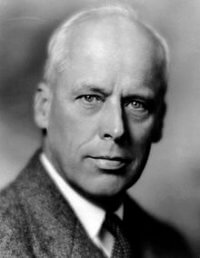 A former Presbyterian pastor, Norman Thomas was a leading public activist, pacifist, and six-time presidential candidate for the Socialist Party.  His convictions were influenced by the Social Gospel movement, Marxist writings, and the anarchism; and crystallized into a secularized version of Christian moral perfectionism while tempered by American pragmatism and practicability.  Although he resigned from the Presbyterian Church after his mother had died in 1931, he never renounced Christianity, referring to himself as an agnostic.  Thomas never claimed to be an atheist and later, towards the end of his life, asked for a Christian burial instead of a socialist funeral.  “I am not an orthodox Christian,” he said, “but the Christian tradition is so much a part of our life, of my life, and Christ is to me so commanding a figure who so released all that I care most for that I feel justified in asserting Christian service which should not play up personal immortality” (Swanberg, 407).

Son of a Presbyterian minister, Thomas was born on November 20, 1884 in Marion, Ohio.  He studied political science under Woodrow Wilson at Princeton University, and, after graduation in 1905, volunteered for social work in New York City before enrolling at Union Theological Seminar to study theology.  Ordained in 1911, Thomas became a pastor of the East Harlem Presbyterian Church in New York City.  On the debate of America’s entry into World War I, Thomas wrote a letter to the press where he advocated for a pacifist stance – a position that led to his forced resignation of his pastorate.  Afterwards, he joined Abraham Muste, Scott Nearing, and Oswal Garrison Villard to form the Fellowship of Reconciliation (FOR); and with Crystal Eastman and Roger Baldwin established the National Civil Liberties Bureau (NCLB).  Later, in 1920, Thomas worked with Jane Addams, Elizabeth Gurley Flynn, and Upton Sinclair to establish the American Civil Liberties Union (ACLU).  Joining the Socialist Party in 1918, Thomas also ran as the socialist candidate for the governorship of New York in 1924; and as the socialist presidential candidate between 1928-1948, when he personally won the respect of the American establishment but presided over the demise of the Socialist Party.

Besides his socialist views, Thomas was an ardent supporter of pacifism as advocated in The Conscientious Objector in America (1923).  His other public activities were associated editor of The Nation (1921-1922), co-director of the League of Industrial Democracy (1922-1937), founder of Southern Tenant Farmers Union (STFU), and, with Burton K. Wheeler and Charles A. Lindbergh, formed the America First Committee (AFC).  During World War II, Thomas opposed the interment of Japanese Americans, and afterwards denounced rearmament and the development of the Cold War.  He took strong stands against poverty, racism, and the Vietnam War; and supported certain aspects of Roosevelt’s New Deal legislation, such as Social Security, and the civil rights movement in America.  His best known works are Is Conscience a Crime (1927), A Socialist Faith 91951), The Test of Freedom (1954), and Socialism Re-examined (1963).  He died on December 19, 1968.

Globalism, Technology . . . and the Humanities?