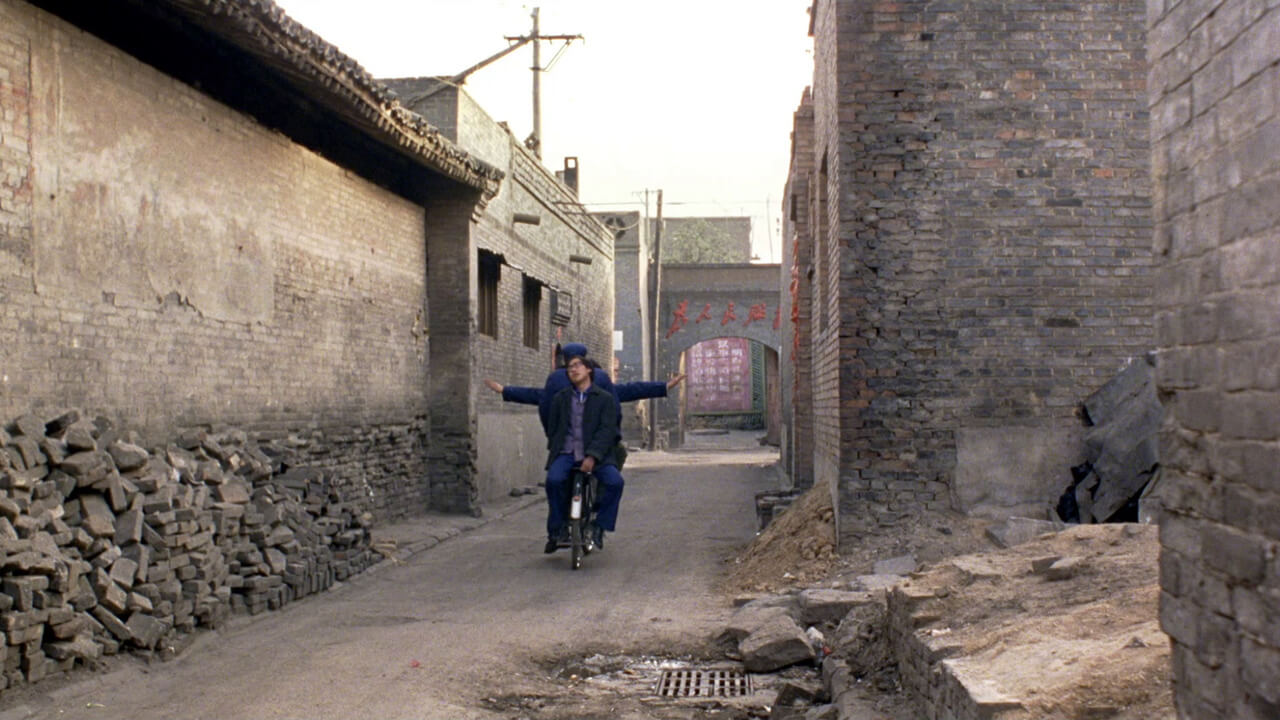 Recently I watched Platform 《站台》, the third of Jia Zhangke’s 贾樟柯 full-length films. Following a group of young musicians from the death of Mao through the era of “reform and opening up” and into the reign of Jiang Zemin, it offers us an unvarnished, unfiltered and unapologetic view from ground-level of how China’s new reforms impacted one rural performance troupe in their everyday lives, as they confront vast Faustian new social forces of birth control and boom-boxes, privatization and pop music.

The film follows the personal and professional lives of four members of a song-and-dance group in rural Shanxi Province, Cui Mingliang (Wang Hongwei 王宏伟), Yin Ruijian (Zhao Tao 赵涛), Zhang Jun (Liang Jingdong 梁景东) and Zhong Ping (Yang Tianyi 杨天乙) – during China’s transition to a market economy and greater degrees of sexual license. In the beginning, their troupe plays mostly “official” songs, glorifying Mao Zedong and the Communist Party, and they wear the traditional uniforms; however, as the 1980’s go on they start performing covers of pop songs and calling themselves the “All-Stars Rock, Breakdance and Electronica Band” from Shenzhen. The young men grow out their hair and start wearing denim and leather jackets; the young women turn in their Mao suits for spandex. The relationships between the characters are also ambiguous. Mingliang has a painful romantic interest in Ruijian from the start, but Ruijian rejects him – in significant part because her father disapproves of any relationship they might have. On the other hand, Jun and Ping are thoroughly in love, suited to each other – but because they’re not married, their relationship is disapproved by their work group and by the authorities.

First off, let me get this out of the way first: I watched the abridged version of Platform (a 155 minute runtime instead of 195 minutes) and I still found the pacing of the movie to be downright glacial. Long stretches of the movie pass in street scenes or road scenes without any dialogue. In many cases this adds to the emotional tension, as though Jia is trying to press home to us the powerlessness of his main characters before the forces of the age. Cinematographically, Jia Zhangke has a decided liking – very similar to Sergei Dvortsevoi, for instance – for long still takes where the scenery, the architecture or the social surroundings of the main characters are the focus rather than the characters themselves. The actors, who are usually placed off-center and dwarfed by the masonry and scalloped roofs or the dry dusty hills behind them, drift in and out of view of the camera while we the audience remain sedentary. Much of the decisive action takes place – in a Chekhov-like way – off-camera, and what we are left seeing is the build-up or the aftermath of that action.

Of course, I can understand why Jia made these directorial decisions – both for thematic and for aesthetic reasons. Speaking from experience here – rural Shanxi may be dry and rocky, but it is gorgeous. But the film is not interested solely in the rugged beauty of China’s rural locales; equal if not greater attention is lavished on the elder architecture and the newly wire-lined streets of rural Shanxi towns, as well as on the rickety tarp-covered trucks, paper lamps, dusty-windowed storefronts and other realia of rural Chinese life, which still seems stuck despite the upheavals brought by Western clothes, Cantopop, colour TV, birth control, discotheques, sex education and private markets. The one innovation that the film unambiguously celebrates is infrastructure development, specifically rail: in one scene the singers and dancers run along the new rail line after catching a glimpse of a freight train, laughing and exhilarated.

The other thing is that Jia Zhangke seems to have his finger firmly on the pulse of the time. The attitude of the film and the filmmaker to the entire period of “reform and opening up” is profoundly ambivalent to negative – and that’s in part because we get to see it from a ground-eye view. We have the “Red” songs and slogans get replaced by rainbow flags and praises of the one child policy. The troupe starts listening to Dschinghis Khan and Teresa Teng. The ladies experiment with perms and cigarettes. But we also see Zhong Ping, pregnant and distraught, being hounded by three men (including her boyfriend) to get an abortion while the fate of the Gang of Four and praises to Deng Xiaoping blare over the clinic radio. We see the leader of the troupe sell out his stake and strike out on his own. The band struggles to stay relevant in painful ways – with the two girls at one point doing a modern dance routine on the back of a truck on the side of the road as an uninterested public drives by. Nor are the struggles relegated merely to the youth. Cui Mingliang’s mother and father have a strained marriage – tormented by money problems and poor communication – that neither of them feel they can leave. By the end of Platform, Jun is jaded and miserable, and Ping has dropped out for good without a word to anyone. Ruijian, too, has left the troupe and gone home to Fenyang, taking up a new job in local government – though she gets a slightly happier ending: she kindles up a romance with the still-interested Mingliang.

Zhong Ping – who by the end of the film is MIA – is the one most viscerally affected by these changes. She gets a perm, starts smoking, strikes up a relationship without the approval of her danwei 单位. She tells Zhang Jun she just wants to be his wife. But Jun – who worries about his parents’ disapprobation and simply doesn’t want to commit – breaks down and confesses their still-illicit relationship to the authorities. Ping is the one who suffers the consequences. And yet, when it comes to expressing their grief and anger, Jun and Ping – heart-wrenchingly and awkwardly – find themselves unable to do so in any other language but that of the pop music that they’ve been imbibing all this time. And the two of them drift apart without resolving anything. ‘She’s impossible,’ Ruijian later says of Ping as she lights up a cigarette with Mingliang.

Jia Zhangke seems to have a bit of a reputation as a leftist, but his movies – at least the two that I’ve seen so far, The Pickpocket 《小武》 and Platform – are deeply conservative in their political sensibilities, insofar as they give voice to Grantian intimations of loss. (Of course, the perpendicularity of Chinese politics renders such a position sensible.) Jia romanticises neither the Maoist period nor “reform and opening.” But his attention is primarily on the wreckage wrought on human relationships and psychology produced by the unloosed and uneven forces of free markets and sexual “liberation” – which arrive in rural China, it seems, as a package deal. Even though Ruijian and Mingliang are free to marry without her father’s approval and have their state-approved one kid by the end of the film, the collateral damage wrought on the relationships of their friends and family along the way is considerable. The film is a bit too interminable for me to recommend without qualification. But there are flashes of deep and valuable insight into how modern China was shaped over the course of the eighties.