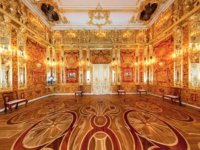 The original Amber Room was in the Catherine Palace: it was a chamber with amber panels backed with gold leaf and mirrors.  It was created from 1701 to 1709 for the Prussian King Wilhelm I, who in turn gave it to Peter the Great (r. 1694-1725) in 1716 to form a Prussian-Russian alliance against Sweden.  The Amber Room remained there until Nazi soldiers looted the Room during World War II and brought parts of it to Königsberg.  Knowledge of its whereabouts thereafter remains a mystery, inspiring the plot for several films, books, and art exhibits.  In 1979, the Soviet government started a reconstruction of the Amber Room and finished it in 2003.

In 1701, the architect Andreas Schlüter decided to use amber, which was not commonly used to cover interior walls, for the Amber Room for Prussian King Friedrich I’s Charlottenburg Palace.  Craftsmen from Sweden, Holland, and Germany, including the acknowledged amber master Gottfried Turau, worked for twelve years to create the large amber panels for a single room.  When Friedrich I died in 1713, his son, Wilhelm I, had the work stopped.  Hoping to form an alliance with Russia, King Wilhelm I decided to give the unfinished Amber Room to Peter the Great, who saw and admired it during an official visit to Berlin.  The panels were dissembled, packaged, and sent to St. Petersburg, where Russian craftsmen were unable to reassemble them.

Elizabeth (r. 1741-62) asked to have the amber used in the redecoration of a room in the Winter Palace.  However, the amber was for a smaller room than the one Elizabeth had wanted to redecorate.  The architect Rastrelli’s solution was to paint the panels to look like amber.  The circumstances changed when Catherine the Great (r. 1762-96) became ruler and ordered the amber to her summer palace at Tsarskoye Selo in 1755.  The new room was larger than the original one designed for the amber, so both German and Russian craftsmen worked for fifteen years on the chamber to satisfy the Empress.  In 1770, the craftsmen finished the Amber Room.  The Amber Room had eight sets of three vertically stacked amber panels separated by long framed mirrors.  The four central amber panels were framed mosaics of precious stones.  The Room’s beauty made it for many the “eighth wonder of the world.”

The Amber Room remained unchanged except for maintenance work in 1833, 1865, and during the 1890s.  When Germany invaded the Soviet Union during World War II, the curators responsible for the Room tried to disassemble it but failed, because the amber had dried out over the years and became brittle.  Any attempt to remove the panels resulted in the amber crumbling.  Therefore, the curators placed mundane wallpaper to hide the Amber Room in an attempt to prevent the Nazis from seizing it.  When the Soviet military retreated, the Nazis used Tsarskoye Selo as a base and discovered the Amber Room.  In 1941, the Nazis disassembled the Amber Room, packed into 27 crates, and sent it to Königsberg, where the Room was put on public displayed.

The Royal Air Force bombed Königsberg and supposedly destroyed the Amber Room in 1944.  Although historians were confident that the Room was in Königsberg in 1943, they cannot verify its destruction.  Since 1944, there have been various reports and theories about the location of all or parts of the Amber Room: it was hidden in a subterranean bunker, it was buried in the mines in the Ergebirge mountain range, or it was taken onto a submarine later sunk by the Soviet forces.  There have been many different individuals, groups, and even governments that have conducted extensive searches for the Amber Room but all have found little result.  The mystery of the location of the Amber Room persists today.

In 1979, the Soviet government started a reconstruction of the Amber Room based on black and white photographs of the original room.  The Soviet and later Russian government withdrew funding for the project, but the German company, Ruhrgas AG, have kept the work alive.  By 2003 the Russian craftsmen completed the work, and President Vladimir Putin and German Chancellor Gerhard Schröder dedicated the new room during the 300-year anniversary of St. Petersburg.

The Republic’s Purpose: A Few Thoughts Inspired by Cicero and Machiavelli

There was a Boy They Called Hillaire

Business Is a Many Splendored Thing