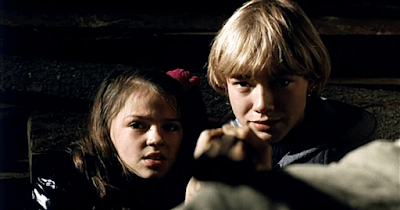 Though not technically a Kazakh film, Kazakh director Gul’shad Omarova’s screenwriting debut, before directing Shıza in 2005, was a 2001 Russian-language road movie called Sëstry (or Sisters), directed by Sergei Bodrov, Jr. (son of Sergei Bodrov, Sr – who also got writing credits on this film – and the lead actor in Brat and Kavkazskii plennik). So I’m actually glad I reviewed Brat first, but I still feel at something of a disadvantage in reviewing Sëstry here, in part because the plot and characters of Ya ne vernus’ have many surface similarities to this film. But they are films separated by half a generation, and the broad thematic concerns of the two films are therefore quite different. Sëstry is ultimately a film about doubt and uncertainty; Ya ne vernus’, a film about faith in uncertainty. Post-Soviet questions loom large in the mind of Sëstry – whether economic uncertainty, pop-culture or ethnic identity – in a way that they don’t as much (though they are by no means entirely absent) in Ya ne vernus’.

A mid-level ethnic-Dagestani gangster named Albert “Alik” Murtazaev (Roman Ageev) gets released from prison after serving his term. However, he lost some money that he owed to his former gang, and now the leader of the gang (Kirill Pirogov) is out to get his million rubles back. Alik sends his eight-year-old daughter Dina (Katya Gorina) and his thirteen-year-old stepdaughter Sveta (Oksana Akinshina) into hiding to escape from the criminals. The two daughters lead very different lives, and do not get on well at all in the beginning. Dina is spoiled and materialistic, precocious in some wrong ways and painfully naïve in others. Sveta lives a poorer life with her maternal grandmother, listens to Viktor Tsoi (whose memory she treats with hagiographical reverence), and trains at a range with her rifle, dreaming of becoming an army sniper. When Alik’s gang discovers the two girls, they are forced to flee and wander around on the road to elude them, all the while trying to contact their parents. Apart from Viktor Tsoi, another connexion with Igla is Seifullin (Aleksandr Bashirov, who played Spartak there), a Central Asian Muslim who takes the girls under his protection against the gang toward the end of the film; and Sergei Bodrov, Jr. himself makes a cameo as Danila Bagrov, his character from Brat.

The briskly-paced film is driven in large part, just as Ya ne vernus’ is, by the odd-couple repartee of the two girls as they are flung together for survival and begin to form a bond. A substantial portion of the road-film drama to Sëstry arises from the fact that Russia is still in recovery from the Chechen war and still not socially or economically out-of-the-woods, so to speak. The police are still shown to be less powerful than the criminals, and occasionally on the take (though one policeman chooses to die rather than betray the girls to the mafia). The people they meet, even the people who help them, are reticent and suspicious – and understandably don’t want to get caught in the middle of a gang war. Ethnic tension is also something they need to navigate: Dina doesn’t look quite Russian, and that complicates their situation somewhat. At one point they get taken in by an extended family of Roma, who help them get back on their feet by busking and – at one point – gambling with Danila Bagrov.

Psychologically, this film is remarkably astute. One has to give some mad acting props to the thirteen-year-old Oksana Akinshina here. She is cool, unflappable, instantly relatable and not given to overacting – she carries herself with a distinctively-Russian sang-froid, which is all the more evident and convincing when she’s staring down the scope of a rifle. But she is able to convey profound and complex emotion – disdain, compassion, terror, pain, relief, joy, sorrow – with subtle facial and body language that backfills her sparse spoken dialogue with reams of subtext. Katya Gorina performs well, too, giving a bit of a sly edge to her spoiled eight-year-old character that ends up becoming endearing. By the bittersweet end of the movie, we’re invested enough in the two half-sisters’ relationship that we actually come as close as Sveta does to tears – and her tears carry that much more weight for their rarity.

Dina and Sveta show us two faces of (what was then called) the “new Russia” – the Russia that was warily making its way out of the gloom of the Yeltsin years, and which hadn’t quite left it behind. Dina is clearly sheltered, but much cleverer than an eight-year-old ought to be (as when she asks Sveta how far she’s gone with her boyfriend). The two of them bond over, of all things, Indian belly-dance. Still, it’s Sveta who needs to acquaint her with the facts of life, with the nature of their father’s business and the seriousness of their situation. Sveta’s own blunt cynicism, her harsh criticisms of Dina’s lifestyle, her dim view of Alik’s “business” and her hardscrabble ethic are abrasive and even jarring – particularly when she straight up breaks into what she thinks is her friend’s dacha to steal food. But it’s what keeps her and Dina alive, and Dina ultimately learns to appreciate it.

The soundtrack – another nod, perhaps, to Igla – consists mostly of 1980s Soviet and early-RF rock numbers from Kino and Agatha Christie. The film is lit like a BBC made-for-TV production from the same era. That’s not a compliment. However, otherwise, the cinematographer makes some bold and interesting choices, including a bit of over-the-shoulder shaky cam when the gangsters first break into the girls’ apartment, and innovative framing when moving from indoor sets to outdoor ones. Sëstry is nowhere close to being as claustrophobic as Brat (though you get flashes of it when Alik meets up for the second time with members of his gang in an old junkyard), but the film retains both Brat’s low-budget but high-efficiency props department and its anti-climactic and perfunctory approach to violence. I have to say here that I prefer the gritty realism of post-Soviet Russian film’s treatment of violent death, to the unwarranted glamour with which modern American action movies are always lavishing on it. This is absolutely a matter of aesthetics, but of course matters of aesthetics are usually indicators of something deeper.

Sëstry isn’t quite my favorite Soviet or post-Soviet gangster movie, but it’s got more than its fair share of brilliant glimmers. It truly is a shame that Sergei Bodrov, Jr. (may his memory be eternal!) was not given more time to sit in the director’s chair. He clearly inherited more than a bit of his father’s talent for directing film. As a bookend or as a companion piece to Brat and its sequel, it’s charming and fits in well.

Flannery O’Connor and the Perils of Governing by Tenderness

Political and Artistic Divides in Baudelaire: An Aesthetic of Evil Baudelaire and Benjamin: Persons or Monads?