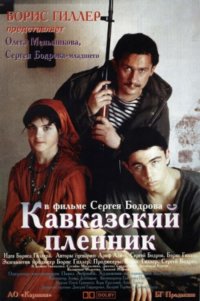 I first watched this film in 2009 when I was taking Russian language classes at Rhode Island College. It was, in fact, the second Sergei Bodrov film I ever watched, after the beautiful yet hammy Kóshpendiler. I also watched the bootstrap-budget crime-thriller Brat in the same class, though despite the two films featuring the same actor – the late Sergei Bodrov, Jr. (memory eternal) – I did not really connect the two when I first watched them. Bodrov is actually a fairly important name in my cinematic education, and I will come to explain why in a future blog post. But the 1996 Russian-Kazakhstani film Kavkazskyi plennik features Bodrov at his most cynical and yet his most wistful: a blunt, unromantic and unsentimental look at the Chechen War and its human costs on both sides. Despite being based on a short story by Count Lev Tolstoi, it’s not, rightly speaking, a pacifist film, just as Slaughterhouse-Five is not quite a pacifist novel. Yet Bodrov and Giller strike at the very same sort of anti-war message as Kurt Vonnegut did, undercutting the same self-serving mythos of war and pointing to its absurdities.

The Billy Pilgrim of this tale is Private Ivan, or Vanya, Zhilin (Sergei Bodrov, Jr). Vanya is green as hell and doesn’t even know how to hold a gun properly, much less shoot one at a Chechen. But when his platoon is ambushed in the mountain by Chechen guerrillas, he is one of two “lucky”enough to be captured alive – the other being his initially-abusive and nihilistic commanding officer Lieutenant Aleksandr “Sasha” Kostylin (Oleg Menshikov). The two of them soon learn that they are being held by a local notable named Abdul-Murad (Jemal Sikharulidze) whose son is in the custody of the Russian barracks in town, and for whom he is willing to trade the two Russians. Abdul-Murad issues an ultimatum: if his son is not released within ten days, he will kill the prisoners. Unfortunately for Sasha and Vanya, the Russian military firmly believes that the Chechens never take prisoners, and also that the Chechens will double-cross any deal they make. This impasse provides much of the drama for the film. All of the characters are caught up in a cycle of violence and revenge that is beyond the control of any one of them.

Part of Bodrov’s genius is bringing the Chechens to life in the film, both as a completely alien culture and as completely relatable individuals. Though there is not a language barrier, since most Chechens speak Russian, there is a palpable and instantaneous mistrust between the captives and their captors. Most of the men, women, boys and girls we see Sasha and Vanya interacting with, have good reason to hate the Russians, who have killed off members of their families.

And yet we can’t help but sympathize first with the prisoners themselves. Vanya is a true innocent of war, a raw recruit who doesn’t want to kill anybody (and, as we learn, isn’t really even capable of it). Despite the cultural gap between them, Vanya and Abdul-Murad’s teenage daughter Dina (Suzanna Mekhralieva) take a rather hopeless liking to each other. And Sasha – even though he’s initially hard to like, a psychotic trigger-finger and a seasoned veteran perfectly capable of killing, who boasts about how he’s going to come back, burn the village, kill the men and take the women – has a soft side to him. With his acerb wit he hits it off with Abdul-Murad’s mute (tongue cut out by Russians in Siberia) son-in-law Hassan (Aleksandr Bureev). And we soon learn that, despite his boasting, he has a tearjerker backstory that makes it unlikely that anyone will come to ransom him alive. In one scene he starts drunkenly singing ‘Proshchanie slavyanki’ with Vanya, and breaks down in tears at the end: our first hint that he feels his situation is more hopeless than he has let on.

What is particularly intriguing about this film is that it makes no attempt to sanitize or romanticize either side. “Proshchanie slavyanki” (or Louis Armstrong) aside, there is very little glorious heroism in being a soldier. There is a scene where Zhirin is facing off a muscular Chechen veteran in a boxing match, where he manages to avoid the fight by yelling at his opponent somewhat impotently. The Chechen throws up his hands with a laugh and dismisses him without a fight. It’s an absurd, lightly comic moment, but it’s also a highly Vonnegut-esque anti-climax. There is also no looking at the Chechens through the rose-tinted spectacles of modern-day politically-correct Islamophilia: this is a society where preadolescent brides are given and taken and where honour killings are spoken of with casual acceptance, but where Muslim strictures against alcohol are rather ignored. But the end result is that all of the involved parties are simply human. The Merchant of Venice comes to mind:

But Bodrov is telling us that that recognition may not be enough in the face of a conflict that has become intractable. After the initial prisoner exchange attempt fails, with both parties negotiating in bad faith, the prisoners are forced to write home to their families. Vanya’s mother (Valentina Fedotova) comes to Chechnya to attempt to ransom her son from Abdul-Murad herself, but she meets with little better success. There is another rather dryly-comedic scene where she beats the Russian military commander with her handbag over his unwillingness to hand over Abdul-Murad’s son in exchange for hers. When she meets with Abdul-Murad himself, she and Abdul-Murad voice the central concern of the film when she says: “I know your son’s a teacher; I’m a teacher as well,” and he answers her: “That doesn’t matter now. We’re enemies.” Despite all efforts between the individual Chechens and the individual Russians – Vanya and Dina; Sasha and Hassan; Vanya’s mother and Abdul-Murad – at finding common ground and understanding each other, the logic of war already seems to stifle them.

There’s even a Chekhov’s gun subplot which buttresses the absurdity of the logic of war. One of the soldiers from the Russian barracks goes into town for two bottles of vodka, trades in his pistol, and tells the shopkeeper to ‘keep the change’. Later a Chechen militant lies his way past the guards into the town (as seems to be a common practice) and, seemingly knowing where to go, goes straight to the shopkeeper and buys the Russian pistol off of him for a thick wad of cash. Then he goes to the barracks and shoots one of the soldiers in order to stage a prison break. It doesn’t end well for anyone.

One common criticism I heard of this movie after I watched it the first time was that it’s too slow-paced, too static and that not a lot of action happens between the prisoners’ capture and their ill-fated escape attempt. I can see where that impression comes from, but I don’t think it’s entirely true. The tension does derive from the impasse over the prisoner exchange, but the two sides are constantly in maneuver to get one up on the other. And the uneasy hostage situation gives us the space to understand each of the characters and how they will react. Lieutenant Sasha in particular is caught in a classic tragedy: with no one back home to ransom him, he has nothing to lose, and the result as it plays out is heartbreaking in its predictability.

Another thing: Kavkazskyi plennik was shot on location in Dagestan – another region of Russia which has had “separatist” and “militant” problems historically – and the gorgeous scenery and the unfamiliar mountain villagescape (complete with donkeys and sheep and other livestock) provides a very plausible backdrop for the hostage situation that is the centerpiece of the film. There is also something of an irony in the fact that this film, which is a brilliant, sensitive and profound work of art, was a joint Russian-Kazakhstani venture – two nations also divided by religion and culture and have a somewhat-troubled history together, but which were in this case clearly able to find common ground. Bodrov has grown, since Kavkazskyi plennik, as a filmmaker into exploring some of this common ground, though it’s taken a bit of trial and error to do. As we’ve seen with Shıza (which Bodrov co-wrote with Guka Omarova), he’s not averse to pairing Russians and Muslim inorodtsy together, or even showcasing the similarities between the two cultures under very different modern forms of social stress.

Still, Kavkazskyi plennik features Sergei Bodrov at his sublime best: intelligent, sensitive, able to spin a yarn well without insulting his audience with tawdry sentimentality or specious simplification. Though Bodrov is no stranger to making straight-up action-blockbuster war films (one of which in particular I will touch on a bit later), he set out in this case to make an anti-Hollywood, anti-war film – one which subverts both Russian and American expectations of the genre – and he succeeded in a way that would make Vonnegut (or Tolstoi, for that matter) proud.