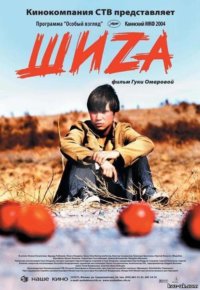 The first Sergei Bodrov film I ever saw was his delightfully-hammy and gloriously-terrible 2005 historical epic Kóshpendiler, a highly-fictionalized account of the early life and career of the military and diplomatic genius Kazakh prince Abylaı Han, which I absolutely will revisit sometime in the near future. Later, as part of the Russian language class I took at Rhode Island College, I saw his 1997 war drama Kavkazskiy plennik, which in my memory stands as a much better film on a much smaller scale, and which I may also go back and revisit at some point in the near future. The film of his that I just watched, the 2004 crime-thriller and coming-of-age drama Shıza (also titled Schizo or The Recruiter in English), co-written and directed by Gulshat Omarova, comes far closer in spirit to Sergei Bodrov’s earlier work than his later. Even though it is set in Kazakhstan, features a Kazakh directness and sports a cast of mostly-Kazakh characters, it is at heart a very Russian story.

The film centers on a fifteen-year-old high-schooler named Mustafa (Oljas Nýsýppaev), who on account of his reluctance to speak and his apparent slowness is given the cruel nickname of Shıza (‘schizo’) at school, and then expelled for getting into a fight. His poor mother (Gul’nara Eralıeva) takes him in to see a Russian doctor who accepts eggs, fish and homemade smetana as payment, who finds nothing physically wrong with him but suggests he may have some developmental abnormalities. He gives him a prescription and a referral to a specialist. Shıza doesn’t want to go back to school, and so his mother’s boyfriend Sakura (Eduard Tabishev) takes him under his wing with the prospect of earning some money. It turns out that Shıza’s job is to scout and recruit ‘fresh meat’ for an underground boxing club, but when Ali, one of the fighters Shıza scouts, dies in the ring, leaving his young son Sanjik and his girlfriend Zinka (Olga Landina) in the lurch. Shıza tries to make it up to them by supporting them financially, but finds himself getting further and further involved in the black-market gambling circuit and its attendant violence.

The setting of the story clearly reflects the recently-gone ‘lawless nineties’, with the bling-laden, open-shirted and sport-blazered, Mercedes-driving criminal lifestyle of the owners of the fight club being a stand-in for the cutthroat grasping of the oligarchs, and the blood-drenched boxing ring itself is something of a metaphor for the anarchic laissez-faire market economy, taking its toll on human flesh. These boxing matches are rigged, and unfairly bet on seasoned professionals to beat up on common working-class stiffs – adding an additional layer of realism and meaning to the cinematic metaphor for shock therapy. It also gives you reason to cheer like mad when one middle-aged electrical worker goaded into the ring manages to take down a hulking youth a head taller and nearly double his weight. There’s a certain “gangster aesthetic” that is both sported and mocked in Shıza. The self-awareness with which the fifteen-year-old Shıza starts wearing a leather jacket and sunglasses and steals Sakura’s cigarettes to smoke tells you a lot about the way it was seen to be imported.

More broadly, this is a Kazakh film in which the scenery doesn’t consist so much of the wide open steppe with either its bleak desolation or its romantic potentialities, but instead: heavy industry, switching yards, coal heaps and smokestacks, cranes, factories, concrete slabs, walled bazaars – either that, or half-pre-fab houses with worn wooden fences and outdoor latrines and showers. This is neither the hardscrabble Kazakhstan of a remote Tengri past, nor the swashbuckling era of Kazakh freedom fighters from Dzunghar persecution. This is the post-Soviet society I saw in 2009, which the film presents without sentimentality and treats with an unvarnished realism. (I admit to feeling a trifle nostalgic.) The cinematography actually helps to accentuate the plight of Shıza and his family: Omarova seems to have a liking for high-angle shots that dwarf individuals and even crowds of people against the gigantism of rusting industrial machinery and architecture. The one element of the cinematography that I didn’t particularly like were the plentiful first-person POV shots, which felt comical when the mood called for more serious choices.

I say this is a Russian story, but that’s really owing to the fact that – despite having a Kazakh name – Shıza is an archetypically Russian protagonist. In fact, he mostly speaks in Russian. He comes very close to the загадочная русская душа, the elusive ‘Russian soul’. Despite this being a very modern story with a realist angle, in some ways Shıza is patterned on the Russian мужик of mediæval folklore. He’s quiet, slow, and his speech is often curt and ‘simple’. Many of the other characters call him an ‘idiot’ or a ‘fool’. Like a good Russian protagonist, he cares a lot about his mother and uncle, has an unflappable sense of fair play, and has an instinctive love for orphans and widows. The reasons he’s after money are not selfish. His motivations are fairly transparent, and at times we worry that he might be a bit too naïve for the sorts of work he does – lining himself up to get sold out or backstabbed at some point. But at the same time, Shıza is fairly cagey and observant, and other people tend to underestimate him. He clearly understands more than he lets on about the situations he is in, often times better than the ‘smart’ characters do. In fact, a significant part of the plot involves the way he manages to get one-up on the crime bosses he works for.

The relationship between the young Shıza and the cynical older Russian Zinka is worth commenting on a bit as well. It won’t be spoiling too much to say that the growth in their interactions is handled with remarkable subtlety and grace. Despite Zinka’s first brusque and distrustful meeting with Shıza (‘I don’t have any friends like him’) and her seemingly cold attitude to her foster-son, she is not insensitive to his having gone out of his way to keep his word to her dead boyfriend. She naturally opens up to Shıza, despite the youth lying to her at first about Ali’s demise. She tells him of her dreams of moving to China, getting better wages, settling down with a nice Chinese guy… Handled by anyone else, Zinka might have come off as a crass and caustic character. But Olga Landina’s acting chops are superb, and we get to see convincingly that her character really does have a sweet and kind heart beneath her rough edges. Shıza notices this quite quickly, though, and the romantic turn their relationship takes seems natural and unforced. Ultimately, it’s Zinka he trusts with his mother’s life and his own.

Given that I’m treating Shıza as a Russian crime drama, however, it deserves to be judged as one. If there’s one real flaw I might find with the film, it would be how it wraps up. A lot of time is spent on Shıza’s ‘descent’ into the underworld boxing and his subsequent involvement in progressively bigger transgressions. He does have a redemptive arc, however, and this unfortunately gets a bit short-sold – added almost as an afterthought. Though we do get to see and hear what he does to atone and why – mostly through a sequence between Shıza and Sanjik and later through a voice-over narration – it might have been worth spending a few extra minutes with Shıza’s interior life after the film’s climax and how he deals with what he has done.

Even so, Omarova put out a sterling piece of cinema here, and I would commend it sincerely to the age-appropriate audience. It is, after all, a movie about illegal boxing, so there’s some violence, blood and rear-end male nudity. I do tend to enjoy “underdog movies generally, and this one has the favorable distinctions of being solid, gritty, well-paced and heartfelt.

This is also available on Matthew Cooper’s blog.

Transformative Love and The Recovery of Tradition in Mr. Sammler’s Planet