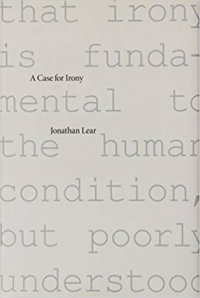 Today we often misunderstand irony for sarcasm, self-detachment, or cleverness instead as a source of potential knowledge that can disrupt the mundane routine of our lives. Jonathan Lear, the John U. Nef Distinguished Service Professor in the Committee of Social Thought and the Department of Philosophy at the University of Chicago, seeks to recover this original understanding of irony as service to oneself and others in his book, A Case for Irony. For Lear, “irony is fundamental to the human condition” and a proper understanding of it can help us lead a “distinctively human life” (p.1). Looking back at Socrates’ and Kierkegaard’s use of irony, Lear hopes to recover this distinctively human aspect of our existence and incorporate it into our lives.

The book itself is divided into two sections: the first is the Tanner Lectures on Human Values that Lear gave at Harvard University; the second is critiques by a group of commentators – Christine M. Korsgaard, Richard Moran, Cora Diamond, and Robert Paul – and Lear’s responses to them. In the first part, Lear’s has two essays about irony, with the first one being on irony as an experience and type of existence and the second being about our capacity of irony. The topic is a timely one as the contemporary confusion about irony leads people to dismiss it as a source of knowledge and orientation in their lives.

The confusion about the nature and purpose of irony is clarified in the first essay, “To Become Human Does Not Come That Easily,” where Lear looks to Kierkegaard for guidance. Of course, Kierkegaard himself looked towards Socrates to discover that irony is a type of existence in the search to know what it means to be human among people who are perfectly sure what it is. These people live in a “dreadful illusion” claims Kierkegaard because they do not reflect upon the possibility that there could exist an alternative way to live. To consider these alternatives is to live an ironic existence.

The possibility of irony arises when a gap opens between an accepted social practice and the failure of realizing its aspiration. Kierkegaard points out this possibility when he asks whether there is a Christian, who struggles with the difficult questions about salvation, among Christians, those who practice only the social rituals of the religion. In other words, are there any members who live up to the aspirations of Christianity? This existential realization that one has fallen short of living to the ideals of Christianity shakes us of out of the comfort of living and disorients and disrupts our practical identity as a Christian. What was once familiar now appears to us as unfamiliar, strange, and bizarre. This experience of “uncanniness,” to use Lear’s word, is what makes irony compelling in the search for authentic meaning.

At its core, this experience is fundamentally an erotic Platonic drive that longs for transcendence beyond the mundane. It disrupts our practical knowledge where we no longer know what our activity consist of and what meaning we had attached to it: the life and identity that we had once had taken as familiar has suddenly become unfamiliar and unknown. The life we now lead – ironic existence – is to continue to live in our practical activity and simultaneously to call into question whether such an activity possesses meaning. The concepts with which we understand and live our lives now have a certain vulnerability to them, but it is this vulnerability that enables us to claim that ironic existence is a type of human excellence because it is a form of truth and self-knowledge. Socrates, who led a life of continual questioning, is the preeminent example of this type of life. For Kierkegaard, the gap between the mundane and the transcendent was based on explicitly Christian categories, yet the concept of irony as Lear explains it has strong resonance even in our post-secular society.  The economic recession has revealed the meaninglessness of much “knowledge” work, higher education seems to have lost a way of making the transcendent meaningful for many students, who wander through university with little guidance, and the rise in small-scale artisanal crafts bespeaks an interest in closing this “ironic” gap.

The second essay, “Ironic soul,” is a psychoanalytical account of irony that argues making conscious the unconscious acknowledgement of our ironic existence has therapeutic benefits to the person. The repressed unconscious idea is manifested in ways that makes it subject to psychoanalytical analysis that reveals to us verbally what was originally unconscious. In other words, psychoanalysis for Lear is a type of ironic disruption where we become aware of our unconscious. Through its techniques, psychoanalysis facilitates our capacity to recognize and to express what was once familiar is really unfamiliar.

The second half of the book is critiques of Lear’s argument and his responses to them. Most of the criticism is fairly technical, such as questions over psychic unity or interpretation of Alcibiades, although a number of them center on Lear’s employment of psychoanalysis in his understanding of irony. Lear does not back away from his use of psychoanalysis, claiming it is an essential tool for self-knowledge and human excellence. Ultimately, Lear believes that psychoanalysis is required for us to live an ironic existence in this secular age.

But is not irony – its capacity, experience, and type of existence – fundamentally transcendental in nature? Whether it is Socrates, in consultation with the Oracle at Delphi, or Kierkegaard’s Evangelical Lutheranism, irony appears to require us to look at something beyond ourselves to shock us out of the familiar and comfortable. Psychoanalysis does accomplish this feat, but it does not seem to have a transcendental component because of its inward-looking gaze. It offers detachment but a type of detachment that is ultimately is a form of self-absorption: the unconscious that resides within us as opposed to a type of divinity that transcends us.

In spite of this, Lear’s A Case for Irony is a timely book for a culture that is confused about what it means to be human. It prompts us to ask the important questions that guide our lives and presents the models of Socrates, Kierkegaard, and psychoanalysis as ways to accomplish this. Technical at times but still approachable to the general reader, A Case for Irony is worth consulting for those who wish to know who they are and where they will be going.

This review was originally published with the same title in the The University Bookman in spring 2012.