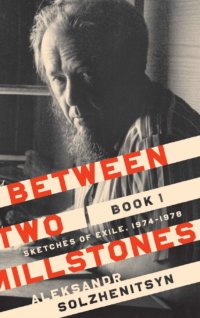 “Away from home in a country far away, even the springtime sun is gray.”

The first translation into English of Solzhenitsyn’s memoirs of his years in the West, Between Two Milestones covers the years 1974-78 (the second, forthcoming book will look at the years 1978-94). Having spent twenty years of his life in exile, and eighteen of them in the United States, Solzhenitsyn found himself between the “two milestones” of the totalitarian Soviet Union, from which he had been forcibly exiled in 1974, and the West with its consumerism, materialism, and loss of spiritual purpose that he roundly criticized. As the excellent introduction by Daniel Mahoney makes clear, Solzhenitsyn also was torn between his role as a literary writer and political prophet as well as his admiration for the West and his fear that it had lost its nerve against the Soviet Union. From these memoirs we see that Solzhenitsyn was an independent and clear-sighted thinker who abhorred the ideological cant of both Soviet communism and Western democratic liberalism. Seeking a different way from both East and West, Solzhenitsyn recorded his thoughts while in exile, which are now are finally available for the public to read.

The memoirs are divided into five chapters centered around a particular theme that both existentially and intellectually preoccupied Solzhenitsyn. Chapter one, “Untethered,” accounts for Solzhenitsyn’s time in Europe before departing to the United States. Solzhenitsyn’s silence to the press after he had been exiled was not only a great disappointment to the media who had come from all corners of Europe to interview him but a foreshadowing of his fractious relationship with them in the future. From Germany to Switzerland to Norway and France and elsewhere, Solzhenitsyn met dignitaries, writers, and an assortment of Russian exiles. But throughout this time Solzhenitsyn worried about his family and his archives back in Russia.

It was also during this period that he wrote about his dispute with Sakharov about Letter to the Soviet Leaders; his decision to leave four-fifths of his royalties to the Russian Social Fund that would help Russian prisoners and persecuted victims; and his desire to move to Canada or the United States, for “It would also be good to have the children learn English, the most international language in the world.”

When his family and archives finally arrived in Europe to join him, Solzhenitsyn resumed work on The Red Wheel, accepted his Noble Prize, dealt with the Swiss bureaucracy about speaking about politics, and tried to comprehend the idea of having “days off” (vacation). It also is clear how important the Russian Orthodox Church is to Solzhenitsyn as he attended service and spent time with priests and writers who defended the Church. But perhaps most striking was Solzhenitsyn’s stay at the Canton of Appenzell with its vibrant Catholic culture and where its elected leader spoke about the responsibilities that accompanies rights for citizens in order to be free. This idea was for Solzhenitsyn what both the Soviet Union and the West needed to be spiritually healthy civilizations.

Aptly entitled, “Predators and Dupes,” chapter two recounts Solzhenitsyn’s life in the Soviet Union during the 1960s and his dealings with western publishers with their “mistrustful, corrosive, litigious approach” compared to the “boundless, self-sacrificing straightforwardness” of the East. The problems of translating Cancer War, First Circle, Archipelago, and August 1914 were partially mitigated with the hiring of a lawyer in the West (the Solzhenitsyn’s were not aware that literary agents existed), although the KGB continually to throw up roadblocks and westerners took advantage of the situation, particularly the Carlisle’s. It was only when Éditions du Seuil took over the literary management of Solzhenitsyn’s affairs in 1974 did Solzhenitsyn began to be compensated fairly for his works.

“Another Year Adrift,” chapter three, describes Solzhenitsyn’s move to the United States. Having found Canada unsuitable – “when it comes to hefty, overfed, dimwitted hippies, Canada in no way lags behind the rest of the civilized world” – Solzhenitsyn looked to the United States, even hoping to find a community of Old Believers in the country (which he did in Oregon). It was in Alaska, their first visit to the United States, where Solzhenitsyn decided to move to America rather than Canada. Also important was his time at the Hoover Institute and Library where he was able to gather material about the 1917 February Revolution for his The Red Wheel. Finally, Solzhenitsyn went to speak in Washington D.C. and New York to denounce the Soviet Union; however, soon after he became disillusioned about the power of his speeches – and the power of literature – to persuade the West of the existential threat that Soviet communism posed.

Chapter four, “At Five Brooks,” continues Solzhenitsyn’s research at the Hoover Institute and the building of his new home in Five Brooks, Vermont where he could now write The Red Wheel and continue his work for the Russian Social Fund. However, a tax matter arose with the Russian Social Fund between the American and Swiss governments, where all the funds were considered personal income and subject to taxation. This event lead to Solzhenitsyn to write about the situation:

“I was feeling smothered, bewildered: how were we to live in the West? The millstone of the KGB had never tired of crushing me. I was used to that, but now a second millstone, the millstone of the West, was descending upon me to grind me all over again (and not for the first time) . . . How well the millstones of the East and West were grinding together!” (264; 266).

With new legal representation, the tax matter was eventually resolved, although Solzhenitsyn’s reputation became sullied by the media due to this affair.

Solzhenitsyn’s reputation would further be impaired by his 1978 commencement address at Harvard, “A World Split Apart,” that criticized the West for neglecting the spiritual foundations of its civilization since the Enlightenment with its substitution of legal for moral principles. Solzhenitsyn is shocked at the attacks in the media about his speech for not only missing his main point but fabricating things that simply did not exist in the speech. But over time voices emerged that were markedly different from the “arrogant stance of America of New York and Washington” and that understood the message in Solzhenitsyn’s speech, giving him hope:

“Gradually another America began unfolding before my eyes, one that was small-town and robust, the heartland, the America I had envisioned as I was writing my speech and to which my speech was addressed. I now felt a glimmer of hope that I could connect with this America, warn it of what we had experienced, and perhaps even lead it to change direction” (291).

The book’s final chapter is entitled, “Through the Fumes,” retells Solzhenitsyn’s dealing with the KGB and its puppets, like Tomas Řezác, who denounced Solzhenitsyn as an informer and slandered other dissents and emigres. Solzhenitsyn methodically reviews the charges and rebuts them in this account. In doing so it shows the extent and venality that the KGB employed in attempting to discredit those who disagreed with Soviet ideology.

Between Two Milestones is a testament not only to the courage and clear-sightedness of Solzhenitsyn but also to the evils of the Soviet Union and the pathologies that still plague the West. For those who wish to know about the man and his writing, this book is a critical book to consult and read. Insightful, surprisingly humorous at places, and always focused on those things that make life worth living – family, God, culture, and one’s own country – Between Two Milestones illuminates the struggles one faces when living in the West and what one can make of it in this free but empty civilization.

What Hope for the Secular City?

The Fool of New York City